The first picture of AMD's upcoming Radeon R7 370 graphics card has been leaked Chiphell Forums. The picture of the Radeon R7 370 is interesting and confirms a few things about this specific card which will enter the main stream market at a price range of $149 US or even lower considering its based on a chip which has been in the market since the last three years and expected to make a return for one last time.

The Radeon R7 370 is based on the Pitcairn core architecture which was renamed to Curacao during the launch of Radeon 200 series. It can be expected that AMD won't rename the chip again but the card is using the same nomenclature as its predecessor, the Radeon R9 270 series. The only thing that has changed is that AMD has decided to place it in the Radeon R7 series instead of the Radeon R9 series due to the large performance gap and the sub-$149 US pricing this card will feature. Everything above this card will be included in the Radeon R9 series that include the R9 380 series (Tonga) and R9 390 series (Hawaii).

So why do we believe that AMD is using Pitcairn core inside the hood of this card? It's simple, there's a single Crossfire connector on the board instead of the recent XDMA technology which eliminates the need of gold fingers and channels data from cards through the PCI-Express bus. All of GCN 1.0 family use a CrossFire port while the Bonaire core is the only one to use such connector but it's hard to see a Bonaire chip in such a high branding as the 370 when it was previously using the 260 series naming scheme. Since AMD hasn't designed any new GCN 1.0 or 1.1 chip since Hawaii, it can be concluded that this is actually the Pitcairn based rebrand.

From the looks of the card, it can be seen that it uses a single Crossfire connector which allows 2-Way Multi-GPU functionality, a 6-Pin connector which leads to 150W typical board power (75W 6-Pin and 75W PCI-E). The rest of the PCB is quite compact and the display outputs include Dual-DVI, HDMI and a single display port. The card features a similar design scheme as the high-end Fiji parts and the same shroud surface texture can be seen on the card as well. The two Radeon logos can also be spotted however it is not known whether they too lit up in red when the card is operational. There's a single blower type fan which sucks air inside the card and pushes hot air out of the exhaust vent at the back of R7 370 card. 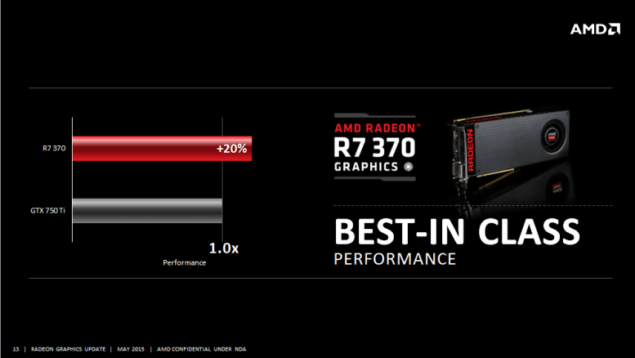 The 6-Pin connector reveals that this card might be based on the Pitcairn XT revision featured on the R9 270 or the Pitcairn Pro revision featured on the R7 265 since the R7 270X demands two 6-Pin connectors and AMD just couldn't magically cut down power consumption on the full core other than toning down the clock speeds as they did with the R9 270. The specifications may include 1024 stream processors, 64 TMUs, 32 ROPs which is the same as the Pitcairn XT but clock speeds could be toned down around 975 MHz range (Base/Boost). The 2 GB GDDR5 memory will operate along a 256-bit memory bus at 5.6 GHz clock speed, pumping out 179 GB/s bandwidth. It is highly likely that the Pitcairn XT will launch as the Radeon R7 370X graphics card later. In terms of performance, the card is aimed at the GeForce GTX 750 Ti (GM107 Maxwell) so it will be priced in the budget range and deliver 20% better performance as AMD's own slide claims. There's more to be revealed over the next couple of days so stay tuned.