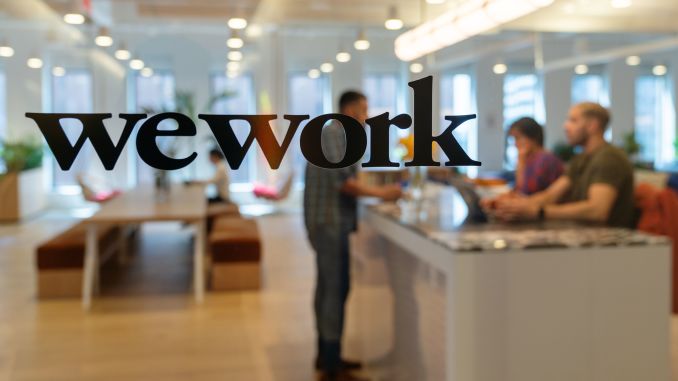 According to multiple reports, SoftBank Group Corp. (TYO:9984) has worked out a financial plan that would grant the Japanese giant control of WeWork. The plan, if implemented, would also further marginalize WeWork’s co-founder, Adam Neumann, in the day-to-day operations of the troubled shared workspace provider.

SoftBank already owns one-third of WeWork and the proposed financial package would allow the Japanese telecoms-to-technology group to raise its stake in the company to over 50 percent. It is, however, unclear as yet whether SoftBank would also purchase WeWork’s outstanding stock in its entirety. This plan appears to epitomize the efforts by SoftBank’s CEO, Masayoshi Son, to salvage about $11 billion already invested in WeWork by the Japanese telecom group and its gargantuan Vision Fund.

Multiple sources have reported that the troubled company’s liquidity situation has reached a critical threshold where it could face bankruptcy by the end of November if alternate funding sources are not secured immediately. Consequently, the company has also been working vehemently with the Wall Street titan, JP Morgan Chase & Co. (NYSE:JPM), to try to raise at least $5 billion in new debts.

According to a WeWork spokesperson, “WeWork has retained a major Wall Street financial institution to arrange a financing. Approximately 60 financing sources have signed confidentiality agreements and are meeting with the company’s management and its bankers over the course of this past week and this coming week.”

The $5 billion debt package reportedly involves selling high yield bonds to raise about $3 billion. The situation, however, remains fluent as the debt structure and associated terms are yet to be finalized. Nonetheless, WeWork’s bond prices have received a boost as reports of this debt deal emerged on Friday. The company’s 2025 senior unsecured notes climbed by at least 8 cents to 90.50 cents after having plunged to a low of 81.25 cents on Thursday. Should WeWork opt to raise funding through public debt markets, it will likely be forced to offer a hefty premium to the yields it bonds currently command. As a reference, the company’s outstanding bonds were issued at a coupon of 7.875 percent and currently offer a yield of around 10 percent.

The much-anticipated listing of WeWork was shelved last month (read our coverage here) amid grave breaches of corporate governance standards and investor reticence over gaining an exposure to a company whose business model remained overly susceptible to a recession. Moreover, the revelations of the antics of the company’s co-founder, Adam Neumann, coupled with grave breaches of corporate governance standards only served to further alienate investors. SoftBank had valued WeWork at about $47 billion at the start of the year. However, before its IPO was shelved, the company’s valuation had reportedly declined to somewhere between $10 billion and $20 billion. Consequently, according to Sanford C. Bernstein & Co., SoftBank’s iconic Vision Fund may ultimately be forced to write-down as much as $5.93 billion while SoftBank itself may have to write-down another $1.24 billion from their respective WeWork investment book value due the precipitous decline in the company’s valuation.