It is common knowledge that the traditional robot is made up of components and hard materials most of which you will surely see in an automotive assembly. Most of these materials include metal, motors, hydraulics etc. and they are extremely strong in nature. But away from these assembly lines robots are usually helping humans in close range day-to-day tasks and so scientists have started working on making soft-bodied robots so that any unforeseen circumstances can be avoided. However there are many challenges that scientists had to face since combining the hard-core powering components to work alongside soft body parts is one hell of a task. This is because looking at these materials the structure seems unreliable and this is a failure that leads to mechanical failure. But this all changed with 3-D printing

This is a big advancement for soft bodied robots

Scientists have now used the understanding of how organisms solve this problem by self-assembling their bodies in such a way that the assembly consists of a steady transition from hard parts of the powering components to the soft body parts. The team of scientists from Wyss Institute with the help of some collaborators has successfully tried using 3-D printing as a strategy which would make sure that the construction of the robot can be done containing a single build; this build incorporates the bio-design principle. The three-dimensional strategy allows the construction of highly complex and rigid structures of the robots, that will likely increase sturdiness of the design. This is something which can’t be done using the traditional methods of nuts, bolts and wrench manufacturing. Soft bodied prototype of a jumping robot was reported in the July 10 issue of 'Science' which used the same concept of gradual transitioning from a rigid core to soft outer body, using nine sequential material ingredients.

“We leveraged additive manufacturing to holistically create, in one uninterrupted 3D printing session, a single body fabricated with nine sequential layers of material, increasing in stiffness from rigid to soft towards the outer body,” said the study’s co–senior author Robert Wood, Ph.D, who is a Core Faculty member and co–leader of the Bioinspired Robotics Platform at the Wyss Institute for Biologically Inspired Engineering at Harvard University, the Charles River Professor of Engineering and Applied Sciences at the Harvard John A. Paulson School of Engineering and Applied Sciences (SEAS), and Founder of the Harvard Microrobotics Lab. ‘By employing a gradient material strategy, we have greatly reduced stress concentrations typically found at the interfaces of soft and rigid components which has resulted in an extremely durable robot.” 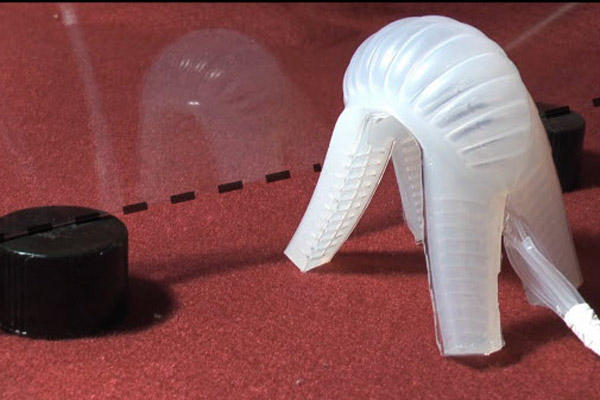 A soft bodied robot with an obstacle in front.

By the help of the expertise of Wyss Institute Senior Research Scientist, James Weaver (PhD), the team was able to print a 3-D model of the jumping robot’s body in a single printing session, which is a quite a big deal. Since 3-D printing is commonly used to make some parts of a robot and this was the first time that a complete robot was made by the help of 3-D printing, and with the use of the gradual transitioning strategy from rigid inner core to a soft exterior.

“Traditional molding–based manufacturing would be impractical to achieve a functionally–graded robot, you would need a new mold every time you change the robot’s design. 3D printing manufacturing is ideal for fabricating the complex and layered body exhibited by our jumping robot,” said Nicholas Bartlett, a co–first author on the study and a graduate researcher in bioinspired robotics at the Wyss Institute and Harvard SEAS.

This method seems much easier than the tradition mold manufacturing since 3D printing allows faster design iterations which eventually leads to faster prototypes to be made while developing robots.

“This new breakthrough demonstrates the power of combining insights into nature’s innovations with the most advanced man–made technological advances – in this case 3D printing technologies – when trying to overcome technical limitations that currently hold back a field,” said Wyss Institute Founding Director Donald Ingber, M.D., Ph.D., who is also the Judah Folkman Professor of Vascular Biology at Harvard Medical School and Boston Children’s Hospital and Professor of Bioengineering at the Harvard John A. Paulson School of Engineering and Applied Sciences. “This ability to fabricate unitary soft robots composed of gradient materials that emulate natural stiffness gradients of living structures paves the way for mass fabrication of robots that can integrate seamlessly with people, whether in our homes, at work or in operating rooms in the future.” 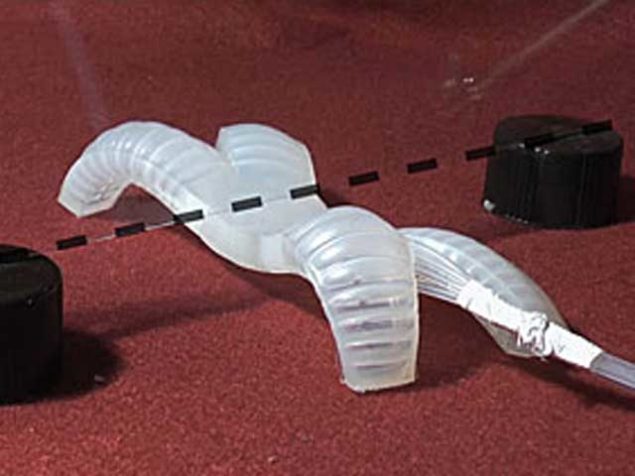 The soft body helps the robot pass through.