At Day 2 of its Tech Summit in Hawaii, Qualcomm revealed important details for the Snapdragon 855. The SoC, when combined with the X50 modem and antennas will deliver 5G internet connectivity to devices utilizing the Snapdragon 855 platform in 2019. We've got all the juicy details for Qualcomm's first 7nm processor today. All of these (except perhaps the GPU), promise big improvements across the SoC's different areas of performance. So, let's head down to the details.

At its tech summit detailing the Snapdragon 845, Qualcomm was eager to compare its latest Snapdragon 855 SoC with other 7nm processors, particularly in Android. The Snapdragon 855 is a vastly different chip its predecessor; a fact that is only related partly to node shrinkage.

The SoC features a new Kryo 485 CPU, critical upgrades to the Hexagon DSP, an increased focus towards AI and 5G compatibility. We'll tackle all of Qualcomm's. upgrades in segments, so let's start with the Kryo 485 and the Adreno 640 GPU.

Qualcomm's Kryo 485 CPU For The Snapdragon 855 Features New Core Arrangement And Demonstrates A 45% Performance Boost Over Its Predecessor:

The Prime and Performace cores are Cortex A76 derivatives and will provide the Snapdragon 855 with a leg up over Samsung's Exynos 9820, which features two custom Mongoose 4 and two Cortex A75 cores in its high-performance cluster.

Qualcomm's custom design for these cores increases their out-of-order execution window, and it also streamlines data prefetch. Qualcomm has also equipped the Snapdragon 855 with a new generation of system level cache, and it looks as if streamlining data prefetch might further contribute to the increase in performance and efficiency from it.

Each core in the Kryo 485 CPU has an L2 Cache, a shared L3 Cache and a System Cache. Overall, the CPU is 45% faster than its predecessor, according to Qualcomm's numbers. The processor will also support 4x16 bit 2133MHz LPDDR4x RAM @ 34.1GB/s.

Snapdragon 855's Adreno 640 GPU Has A 20% Performance Boost Over Its Predecessor; Qualcomm Tight-Lipped For GPU's Other Details, And Focuses On Mobile Gaming Instead:

Stable performance was a highlight in Qualcomm's presentation, and the company did not hesitate to compare the Snapdragon 855 with 'other 7nm Android chipsets' to demonstrate consistent CPU and GPU performance. Speaking of which, the company also claims to have optimized the Kryo 485 CPU for everyday applications. These include Facebook, Instagram, Snapchat, Google Maps, Twitter and Youtube.

Moving towards the Adreno 640, Qualcomm did not share many details for the chip's upgrade or performance. All that we get is a 20% improvement over its predecessor; a figure which isn't impressive given the Snapdragon 855's node jump. The Adreno 640 also features 50% more ALUs, and you'll see their impact when analyzing Qualcomm's focus on gaming.

According to Qualcomm, the Snapdragon 855 will support Dolby Vision, Rec 2020, 10-bit color depth, and, HDR10+. HDR10+ will also play an important role in the SoC's upgrades for photography. The Adreno 640 will also support 120fps gaming, and allow developers to use real-world materials from scientific values when creating games. Finally, the Snapdragon 855 will also support Vulkan 1.1.

The 'AI Engine' is capable of 7 Trillion Operations Per Second (TOPS), and it allows for heterogeneous AI hardware acceleration. The Tensor Accelerator adds support for multiple Deep Learning Frameworks. Qualcomm also paid special focus to its relationship with Google, and the company added that it's paid special focus to Google's Neural Network API.

Finally, one final boost to the Hexagon 690 is the DSP's ability to improve virtual assistant performance. As mobile SoCs continue to advance, AI and photography are two highly critical areas that require a serious focus from companies. With the Tensor Accelerator's 7 Million TOPS (2 million more than the A12's), Qualcomm's heading in a good direction.

Qualcomm's Snapdragon 855 Has A New Spectra 380 ISP Capable Of 4K Video At 60fps With Bokeh:

Another big upgrade on the Snapdragon 855 is on its ISP. Qualcomm's Spectra 380 ISP will record 4K@60fps with Bokeh - in a first for the smartphone world. The Spectra 380 achieves this by taking over a second image pipeline for background differentiation; originally, it was the Snapdragon's DSP which performed this function.

The ISP also allows for Triple Lens 3x Zoom and usage of three separate camera lenses (Wide Angle, Super Wide Angle and Telephoto) for three separate views. This, in turn, paves the way for a brand new file format for images and videos the Snapdragon 855.

The Snapdragon 855 will allow users to use High Efficiency Image Files (HEIF). These files will allow the storage of multiple photos and videos in one file container. An example is photographs taken from the three different lenses mentioned above.

Furthermore, depth segmentation will also allow a device powered by the Snapdragon 855 to record videos in Cinematography. Cinematography allows one part of the video to continue moving, while others remain still. An example is that the bubbles continue to move, but the girl blowing remains static in the image below. 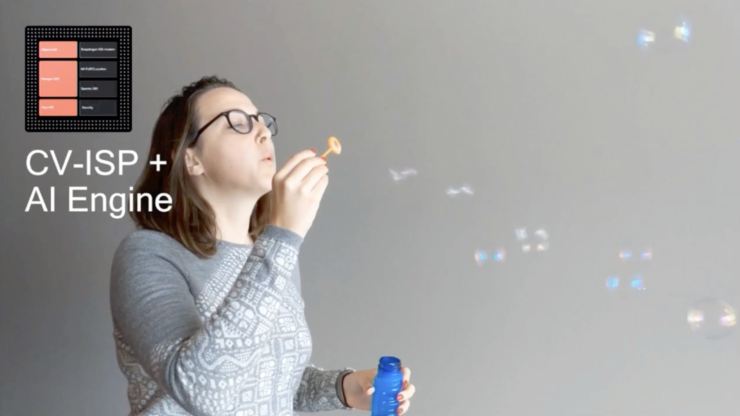 Additionally, the SoC will demonstrate up to 3x power efficiency in recording 4K video, according to Qualcomm's numbers. Qualcomm has made impressive upgrades to the Snapdragon lineup's Spectra ISP, and these will ensure that the processor stays right at the forefront of AI and photographic developments in the smartphone world. The Hexagon 690's Tensor Accelerator focuses on Google's Neural frameworks, and wil, therefore, be a treat to observe on the next generation Pixel smartphones.