Sony managed to surprise us all with its low key announcement of the Xperia Z4 this month. The manufacturer's flagship smartphone was launched at a quiet event, with the device available only for users in its home country, Japan. But if today's news out of China is correct, the Xperia Z4 launch might not be the only surprise Sony has in store for us this year. 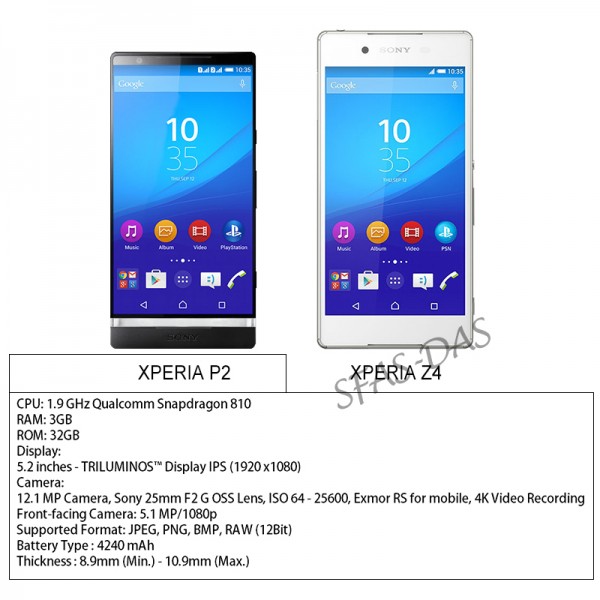 Sony To Launch Upgrade Successor To The P Series?

According to Cnbeta, the Xperia Z4 won't be Sony's only device catering to the high end market this year. Sony's Xperia Z4 has received criticism for its bare minimum design changes on board. But if you remember correctly, the Xperia Z lineup was launched slightly after the P series and soon managed to outshine the former owing to its high specification.

According to today's leak, Sony might be looking at the best of both worlds by reintroducing the P series in the form of the P2 with all the flagship specifications that you'd like. Not only would this result in a breath of fresh air from the Z series' rather strict design form, but it'd give consumers more options to choose from. According to today's information, the P2 can be expected with Qualcomm's Snapdragon 810, coupled with 3 GB of RAM and 32 GB of native storage. All of this will be rounded off with a 5.2 inch 1920 x 1080 display and a 12.1 MP rear camera. Seems like camera strength is going to be the Z series' strong suit, but given the preliminary nature of today's news, we'd treat anything with a grain of salt for now.

What's more interesting is the battery on this alleged Sony device, with the P2's battery expected to be a whooping 4240 mAh. If true then this would mean more than plenty of power for whatever you'd like to do with your device. How that manages to translate into overall design and device weight still remains to be known. One thing's for sure though, Sony's flagship lineup surely needs some changes and the company should be looking towards them if intends to stay relevant. Stay tuned, we'll keep you updated and let us know what you think in the comments section.