A few weeks before this year's Electronic Entertainment Expo, Activision took the wraps off the upcoming next big title in one of the most highly sold first-person shooter video game series known as Call of Duty. At E3, Microsoft kicked off its press conference by providing the first glimpse of Call of Duty: Advanced Warfare running on the Xbox One console. Many gamers have been wondering since then if the developer will be able to achieve resolution and FPS parity on the PlayStation 4 and Xbox One with the game, and the answer appears to be positive. 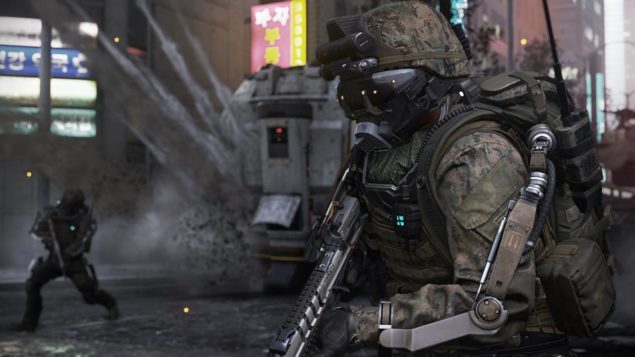 Call of Duty: Advanced Warfare will Apparently Be Fully Optimized on PlayStation 4 and Xbox One - Engine Updates Detailed

Since the reveal of Call of Duty: Advanced Warfare, the developer of the game, Sledgehammer Games, has released many details and information about the title. The upcoming game is said to be fairly different from the previous games in the series and other shooters that are due to release this year. Sledgehammer Games has been boasting the offerings of the game and it looks like the series will come back to its original path with this title.

Learning from the previous installment in the series called Call of Duty: Ghosts, the developer of the upcoming Call of Duty: Advanced Warfare is putting everything into the game. It seems that Sledgehammer Games is not only fixing the gameplay mechanics, but they are also trying to avoid what Infinity Ward did by achieving parity on both the PlayStation 4 and Xbox One consoles in terms of the game's resolution and frame rate.

Sledgehammer Games claimed that the visuals of Call of Duty: Advanced Warfare are so advanced that gamers won't be able to tell that it is a game in first sight. The art director Joe Salud said: "The first thing the gamer's going to notice when they see our facial performances, they're going to wonder, like 'It looks like it's on TV!' And then they're going to realize, 'Oh my god, that's a game.'"

It is great to hear that the upcoming Call of Duty: Advanced Warfare has such next-gen offerings, but will the developer be able to optimize the game fully on both the latest consoles or will it just be like Call of Duty: Ghosts that ran at 1080p on the PlayStation 4, but only 720p on the Xbox One? Talking to GamingBolt, creative director of the game Bret Robbins, said:

“Right, well you know we always strive for complete parity across all our platforms and you know this year will be no different."

Robbins also threw some light on the updates that the developer has implemented in the Call of Duty: Advanced Warfare's engine in order to enhance the overall in-game visuals.

“There are all sorts of new technology from rendering to the way we do our characters. We have blend-shape technology that we use in the face; it really brings out a-lot more emotion. Just across the board the audio engine is a-lot more powerful. We’ve just made tons and tons of updates to the tech.”

Call of Duty: Advanced Warfare will be released on November 4, 2014 for Microsoft Windows, PlayStation 4, PlayStation 3, Xbox One and Xbox 360.