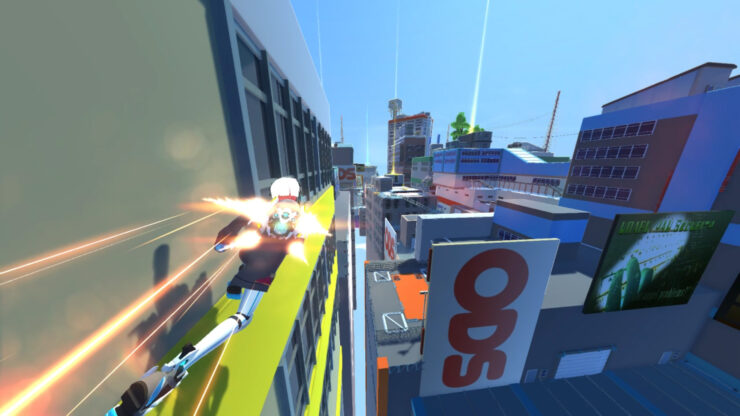 Parkour games have slowly become more popular over the years. After Mirror's Edge started a trend, titles like Dying Light and the recent Hover continued to provide a highly acrobatic experience, albeit with very different goals and underlying themes.

A hidden gem in this niche was Super Cloudbuilt, reviewed favorably by Francesco in July 2017.

Super Cloudbuilt is a high speed, low gravity platform game featuring an excellent level design, a lot of additional content and some online modes that help make the experience never feel dull. Controls may take some time to get used, but after a few stages, players will be able to fly through stages in search of the fastest way to complete it and score a high place on the Leaderboards as if it were second nature. Highly recommended to platform game and especially Sonic the Hedgehog fans.

Now, the Swedish developers at Coilworks are working on Sky Tracers, a new title with a focus on multiplayer races.

Jump over rooftops, scale skyscrapers and fight off hostile robots as you master the almost infinite depth of rocket parkour. Find and carve your very own path through challenging courses in a frantic multiplayer race.

You can check out the first Alpha trailer for Sky Tracers below and the Steam page also revealed the full system requirements for Sky Tracers. If you'd like to try the Alpha build, sign up to become a tester here.

You Can Use Everything in Mirror’s Edge Catalyst’s World