Shaving can be really painful sometimes when not done right and can lead to infections, allergies and even ingrown hairs. After a bad shave you’re probably going to have a face full of band aids and let’s not forget the burn from the aftershave. Keeping all this in mind one wonders wouldn’t It be better if someone created a less painful way to shave, if you’re thinking hair removal creams and lotions are that way then you’re probably not on the right track. It’s a laser razor!

Skarp Technologies is a company that has come up with a solution to this lingering problem in the form of a laser powered razor.

Now shaving will be irritation free and very easy

Skarp Technologies is currently being funded on Kickstarter and have blown past their goal of $160,000 by reaching more than a whopping $2 million in funding from people on the site. Skarp says that their razor is the future of shaving for both Men and Women.

Looking at the Skarp razor it looks like an ordinary razor with a little edgy design, but that about as much as it resembles the average razor. The Skarp razor is powered by a small laser and is easy for getting a close irritation free shave.

Skarp claims that their razor will not damage the skin in any way and they included some other benefits like; No scratches, no burns, no infection/itching and no irritation they also say that the Skarp razor will be environmentally friendly, will provide a very easy minimal effort close and smooth shave and there will be no expensive cartridges to be replaced.

Dr. Morgan Gustavsson MBBS is the founder of the project; he has been working in the field of cosmetic laser and medical industry for the last three decades. He invented and patented the most preferred method of hair removal called IPL (Intense Pulsed Light) in 1989 and later in 2001 had an idea for a laser razor.

The idea was great but the required technology wasn’t available, so he the spent years researching and investigating and finally after a decade he made a breakthrough by finding a wavelength of light that was able to cut any color of hair. In 2013 Paul Binun joined the team and made quick process, later Dr. Christopher Zachary professor and chair at UCI also joined Skarp as an advisor.

The Design and how it works!

The design is a cool and edgy one as they wanted something familiar yet completely different, so working together with designer the team came up with the design and have created prototypes using 6-6061 aluminum. The Skarp razor works on a similar principle that other people have also worked on i.e. cutting dark hair by using wavelengths of light but no one was able to find a way to cut through light hair or different colored one.

The mechanism of the Skarp laser razor 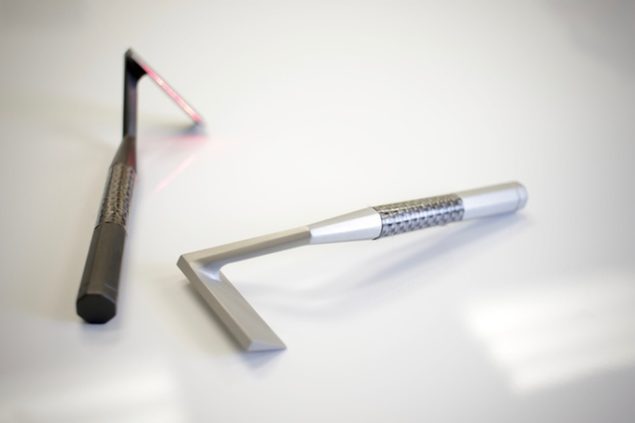 Research by the team showed a chromophore- a particle that absorbs certain wavelengths of light- in hair that would be cut when it will be hit with a certain wavelength of light. The best thing is that the chromophore is present in every human regardless of age and race.

The Skarp razor being 3D printed

Coming on to the conclusion, each year around 2 billion razors or their heads are being thrown in dumps in the US alone; just imagine what the number would be for the whole world. Due to their hazardous nature blades can’t be stored and reusing them is also not an option because of the diseases they can cause. So the razors are presently being dumped in landfills and garbage areas, but the Skarp razor is bound to change all that, plus you will save on water costs too as this razor would require cleaning while shaving. This is  a great tool and we suggest you back it up to get one of them. Tell us what you think about this revolutionary technology.

Here a video telling you some key stuff about the Skarp laser razor.