Siri Will Finally Be Available On macOS Sierra, Here’s What It Does

It has been rotting in the rumors for a long time but today, Siri has finally landed on macOS Sierra. Siri on macOS was a long overdue update that users have been wanting for quite a while now. Now that it is finally here, we're fascinated to know what it does. Apple's confirmation of the news that Siri will be coming to Mac with macOS Sierra is a really important step from the company as its competitors already have their own built-in virtual assistants, such as Cortana in Windows. So, let's see what does Siri has in store for macOS users in the upcoming days.

If you're wondering where will Siri's icon sit on the macOS, it will be at the top of menu bar situated next to the Notification Center toggle. So what exactly is Siri on macOS Sierra? It will be able to handle all context sensitive searches related to things like files. Searching for a file extends beyond than just locating it. Siri will be able to allow users to search for files on which they worked last week or only the files that an individual associate sent. This will make it easier for users to search files based on the context. 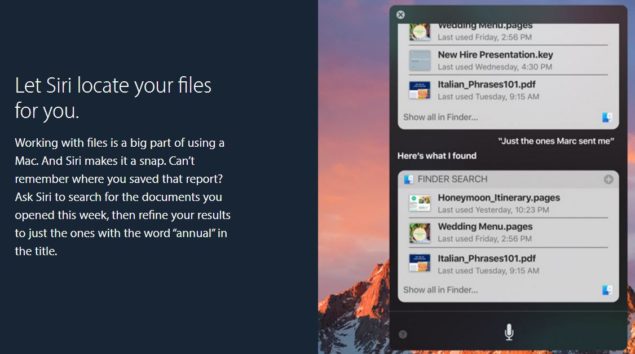 Moreover, Siri can also search the web for you, even though you're in the full screen mode of an app. This will allow users to initiate Siri and make relevant searches from the web. Other than this, Siri on macOS Sierra will also carry the functionality to pin searches to the Notification Center. These are kind of like bookmarks for your web searches, so you can easily access them at a latter time. 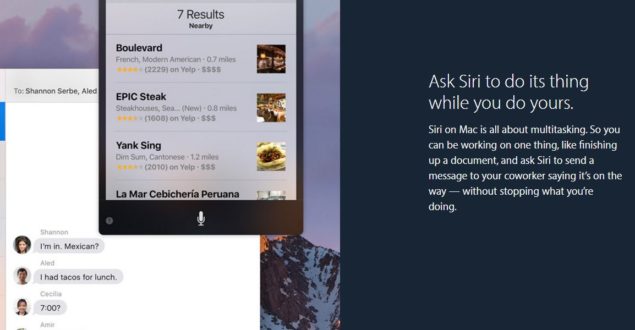 Just like Siri on iOS, Siri on macOS is also able to initiate music, open other apps and send text messages via voice commands. Siri can also work in concurrence with other new features in macOS Sierra as well. Some of these features include Continuity and Apple Pay.

At this point in time, Siri for macOS Sierra carries only these functionalities, which by word are more than enough for an average user. Nonetheless, as time goes by, Siri on macOS will get even more smarter. This is it for now, folks. What are your thoughts on Siri integration in macOS Sierra? Would it have an impact on your productivity? Let us know in the comments.