A couple of days back there was word that Samsung might be planning something big with the Galaxy Note 5, expected to come later this year. The company was rumored to be working towards a 4K display for the next Note that would end up equipping the device with a stunning ppi rating exceeding 700. But those were still rumors, with no official word from the Korean manufacturer itself. That doesn't mean 4K displays won't be in the future for mobile devices, as SHARP seems to have one upped Samsung with its announcement today. 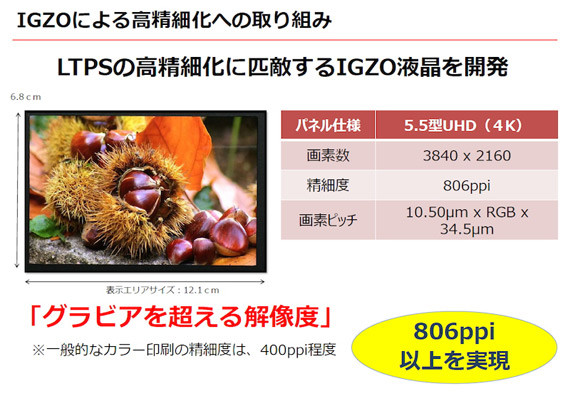 Seems like Japanese manufacturer is eager to make a dent in the smartphone world, as today SHARP has officially unveiled its 4K display panel that's bound to be used in future devices. The company announced its 5.5 inch, $K IGZO display panel which should be good news for anyone simply wishing to have UHD on their handheld devices. Given that the size of the panel is 5.5 inches, you're going to need some amazing eyeballs to actually be able to discern the benefits offered by today's announcement.

Not to mention the battery and performance advancements needed to make a 4K display panel work on a smartphone that just aren't there right now. But given the fact that one of the more defining features of the Android world is devices with top specifications, we just don't see any harm on 4K mobile screens. And hey, you'll also be able to finally stream UHD videos on your screen which will end up ensuring that no detail goes amiss. But we're going to have to wait a while for 4K displays to become a norm, as SHARP's displays aren't set to enter mass production until next year, so we'll have to stick to plain old, lower resolution displays for now. Thoughts? Let us know what you think in the comments section.

Apple Will Manufacture Micro-LEDs In Taiwan By 2H17; Foxconn Invests $27 Million In Sector