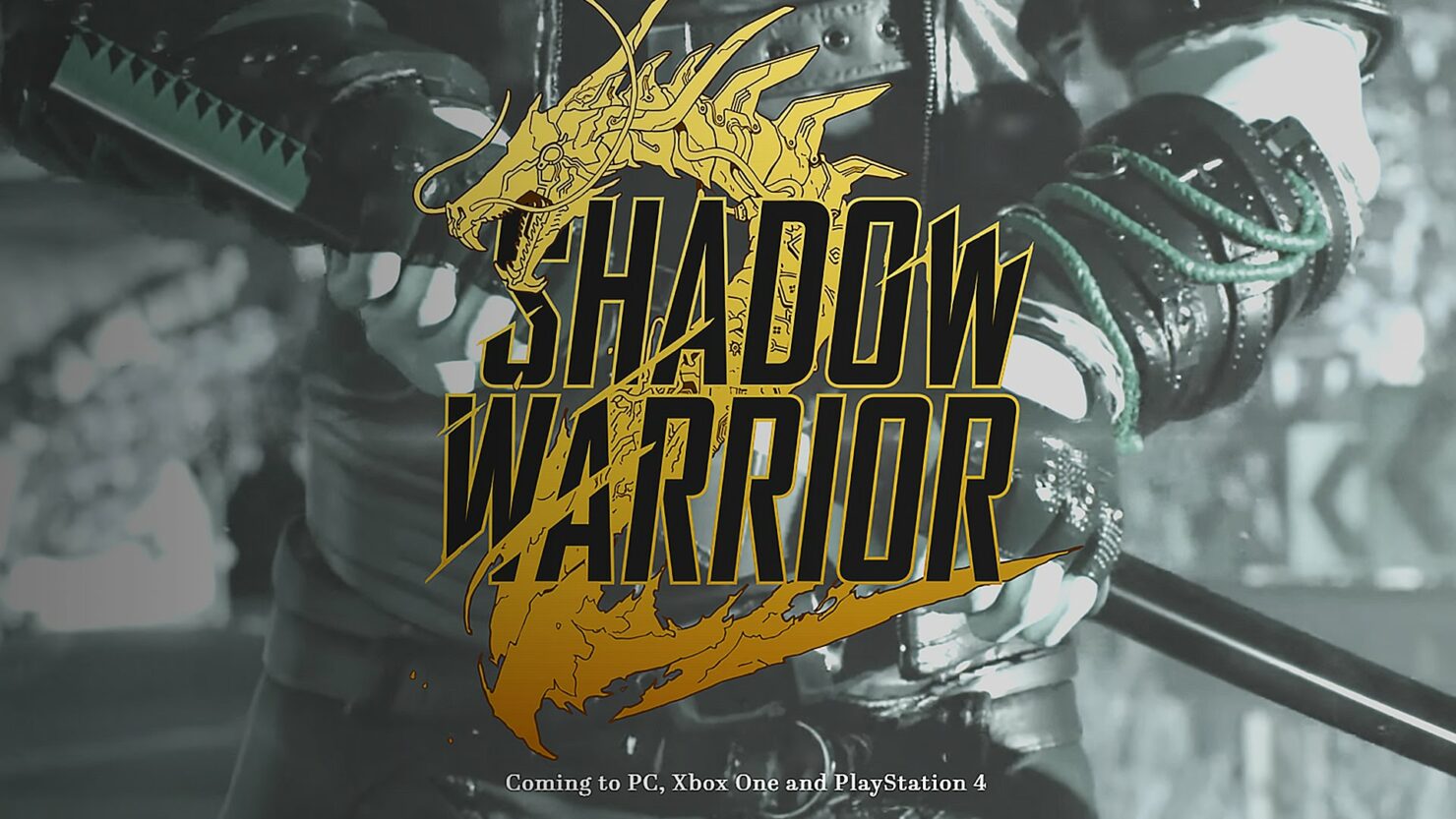 Shadow Warrior 2 is an excellent fast paced first person shooter/slasher from Flying Wild Hog studio and is running on their in-house Road Hog Engine. This graphics engine allows for procedurally generated environments and paths to keep the game fresh even when revisiting old areas. The combat is fast, brutal, and bloody resulting in flying body parts and epic levels of dismemberment. Along with this game comes interesting tech from NVIDIA known as Multi-Res Scaling, a technology that was borrowed from their VRWorks Graphics where each part of the scene is rendered at different resolutions to increase performance. We touched on this as well as the visual differences and performance benefits in an earlier article. But this go around we’re seeing how well this game performs on a variety of video cards from the entry level to the high end.

Being a DX11 makes the testing a bit easier on us, therefore we’re able to deliver more results across the spectrum of performance tiers. We’re using our X99 Broadwell-E based test system for this game and using FRAPS to capture the framerates during our course run. Our course is base on the very beginning of the game as it represents a fairly accurate depiction of what to expect in the rest of the game. Starting off outdoors with massive amounts of dynamic foliage and then moving through an interior space littered with lighting and water effects. We repeated the course three times with each graphics card/setting that we tested. We’re showcasing each cards performance in a metric of Average Frames Per Second, 1% Lows, and .1% Lows as these better represent the characteristics of the cards actual performance rather than relying on, what could be an outlying, absolute minimum FPS. 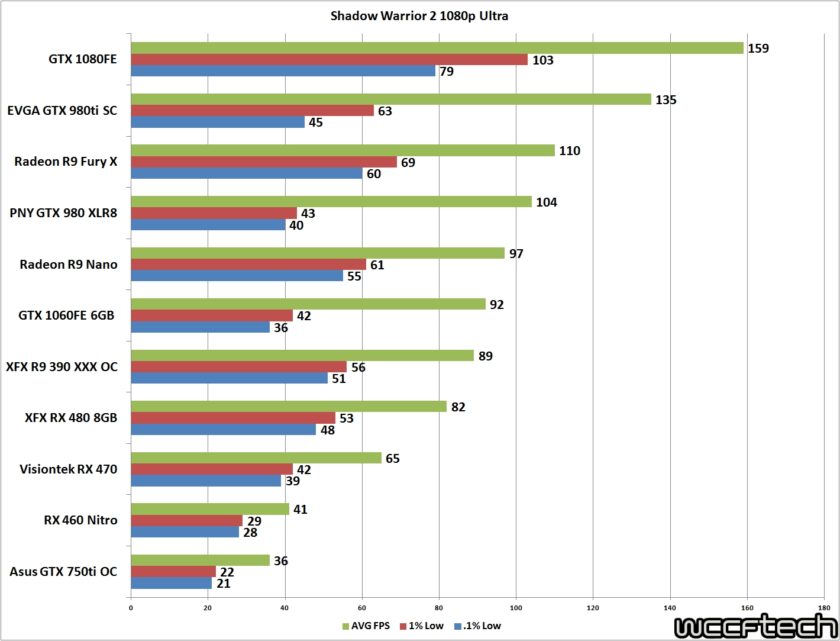 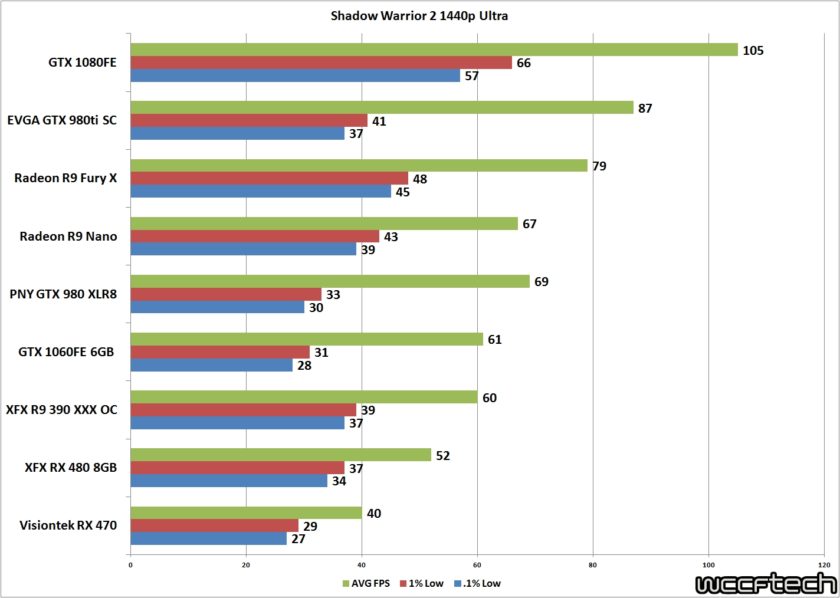 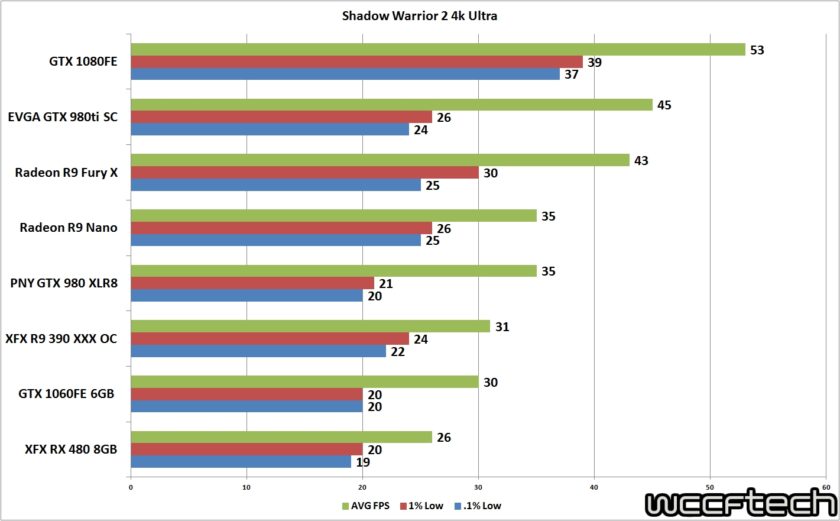 Shadow Warrior 2 may be a bit of a slapstick game in the comedy department, but the requirements to run this game at Ultra is no laughing matter. While most mid-range tier cards should have no problem running it at 1080p Ultra settings, even entry level cards are squirming at 1080p Medium. Moving up to 1440p and unless you’re running a high end graphics card be ready to start turning the settings down if you’re going to want to maintain over 60FPS, or if you’re on that GTX 1060 or GTX 980 you might want to start employing MRS. At 4k things get brutal with only the GTX 1080FE coming close to that 60FPS Average mark. Interestingly enough that 4k mark, with the GTX 1080FE becomes very playable with High preset and Conservative Multi-Res Shading applied. To say the least this game is pretty taxing, but with cause, it’s a highly detailed fast paced game and with a little tweaking to graphics setting becomes very playable at modest resolutions. It’s only when you hit 1440p or higher that it becomes a bit of a bear.