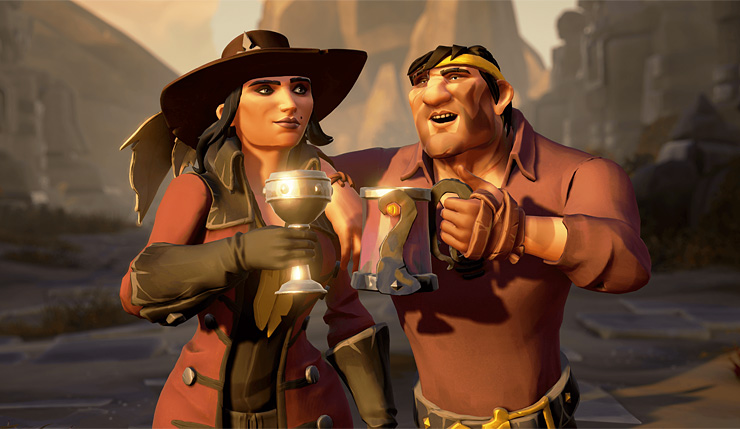 Back in April Microsoft and Rare announced their multiplayer pirate romp Sea of Thieves would finally be coming to Steam, and now they’ve finally announced an early-June release date! The Steam version of Sea of Thieves will set you back $40 and will include full crossplay with the Windows 10 and Xbox One versions of the game. Cross progression is also available, allowing you to start a game on Xbox One and finish it on PC (or vice versa). Unfortunately, Microsoft is not offering free copies of the Steam version of SoT to those who already bought via the Microsoft Store – you’ll have to purchase the game again. You can check out a new Sea of Thieves trailer celebrating the game’s pending arrival on Steam below.

Here’s what Rare had to say about Sea of Thieves’ long-awaited arrival on Steam:

For two years, pirates across the globe have set out in their droves to uncover the mysteries of the Sea of Thieves. Brave buccaneers have taken on Megalodons, repelled the killer Kraken and looted skeleton-filled Forts, forging their names into legend. More than 10 million unique players have already embarked upon this search for adventure, treasure and glory, and soon we’ll be opening the gilded gates to welcome in Steam users!

We’re genuinely thrilled to bring Sea of Thieves to Steam, and look forward to welcoming the Steam community to our game so we can share a grog and a shanty together and hear the tales of their adventures! We’re happy to confirm that cross play will allow Xbox One, Windows 10 and Steam users to adventure together when Sea of Thieves launches on Steam, letting you assemble your perfect pirating crew, whatever their preferred platform.

After a somewhat rocky start, Rare has gradually transformed SoT into a very solid online experience. The game has settled into a regular update schedule, with new content, challenges, and rewards added every month.

Sea of Thieves is available now on PC via the Microsoft Store and Xbox One. The game sails onto Steam on June 3.