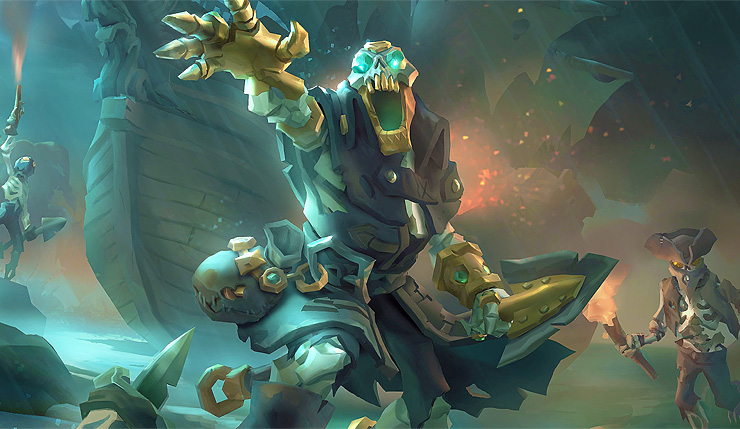 Rare has announced a release date for Sea of Thieves' latest update, Shrouded Spoils. The bundle of new content is set to sail our way tomorrow (November 28).

Something is emerging through the fog... Shrouded Spoils, our latest free content update arrives tomorrow!
The game will be offline between 10am and 2pm GMT for server maintenance and the update. Remember to grab any remaining Festival of the Damned time-limited cosmetics! pic.twitter.com/2GJicPpPuO

For those who missed the initial reveal, Shrouded Spoils' key new feature is roving fog banks, which can strike at any moment, making navigation more difficult. Sea of Thieves executive producer Joe Neate described the fog mechanic in a developer update video:

“One thing we’re introducing in the Shrouded Spoils update is fog. This is something that can roll in at any time, and it really obstructs the vision for the player. It makes visibility a lot harder, but it makes the crow’s nest a really important part of the experience. Climbing up into the crow’s nest, you have an opportunity to look out over the bank of fog and see things in the distance, making it a vital part of ship navigation. Anything, islands and rocks and stuff, becomes a lot more treacherous. It’s going to be eerie — the audio team has done a great job of upping the creaks and noise of your ship you hear when you’re sailing through the fog.”

Also included in Shrouded Spoils are six new skeleton fort locations, skeleton galleons and sloops, additional ship customization options, the explosive Mega-keg item, and more. On top of all that, the kraken and megalodon have been improved – the kraken has a new attack, and both mega-beasties now drop special loot. In other words, this update is kind of a grab bag of stuff, but that’s okay as the next update after Shrouded Spoils will be a weighty one that adds competitive PvP and other big features.