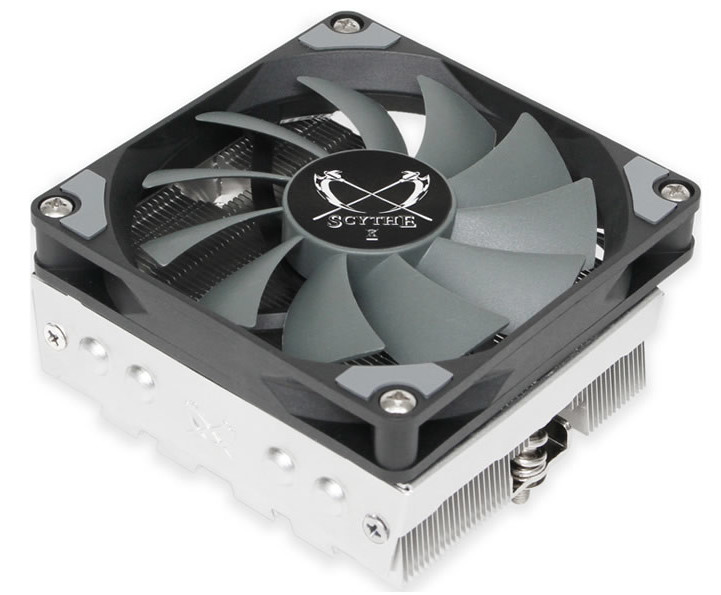 As Reported by TechPowerUp.com, Scythe is adding another cooler to the Shuriken Low-Profile Lineup, this cooler might just be what allows your mini-ITX or mATX build to stay cool even under extensive load. This CPU cooler is just 54mm tall when comparting this to AMD's stock cooler this is substantially shorter as AMDs cooler stands roughly 80mm tall. While this CPU cooler substantially shorter than AMD's stock cooler, you will need to check around your CPU to make sure it can accommodate its design. When comparing this CPU cooler to their Shuriken 3 Low-Profile CPU cooler which costs just $45, it is a bit shorter as the Shuriken has a height of 69mm.

The specifications of this cooler are the 4 separate heat pipes that move heat away from the nickel-plated copper CPU base and moves it to the fin stack to have the heat dissipated away by the attached fan. The Fan spins at the variable speeds of 200 to 2,500 RPM meaning that at 200 RPM this CPU cooler is virtually silent, but at 2,500 RPM this CPU cooler can cool down a CPU of up to 100 watts.

This CPU cooler could cool down even an RYZEN 9 3900X, which while having a TDP 105 watts, which is great because this CPU cooler is stated to work with both the AM4 socket and the LGA 115x (Intel's most recent socket).

The release date for the Shuriken 2 Low-Profile is stated as early next month (December 2019) meaning this might be a perfect gift for your PC-centered friend. The price point was not listed in the release, but going by similar CPU cooler costs the cost of this cooler should be roughly $30 - $40, as their Shuriken 3 Low-Profile is just $45. This is an amazing deal if this cooler can keep a 100 watt CPU cooled effectively because the similar cooler is usually bigger and cost a fair bit more.