This has been a good year for astronomical research. Radio waves have been used by the astronomers to get a closer look in the galactic mass and stardust of the Milky way, and while doing this they found out hundreds of galaxies nearby which were never discovered previously by any other astronomer in history.

A total of 883 galaxies were observed by the scientists out of which 1/3rd were never seen by anyone before. This was done by the scientists while using CSIRO Parkes radio telescope in Australia. Previously, while the rest of the hidden galaxies were found to be 250 million light years away from the Earth, their relative closeness (when talking in astronomical terminology) shows how the space neighboring us is getting all crowdy and filled with galaxies which were never observed before.

"The Milky Way is very beautiful of course and it's very interesting to study our own galaxy, but it completely blocks out the view of the more distant galaxies behind it," said astronomer Lister Staveley-Smith of the International Centre for Radio Astronomy Research (ICRAR) at the University of Western Australia.

As far as the new hidden galaxies that are found, lie within an area known as the Zone of Avoidance. This area is called with the name mentioned because the view specifically of this region in space has not been really clear because of the planets and the stars (which make the Milky Way) are in the way. But the credit goes to the Parkes radio telescope since it is not effected by such obstructions.

"We've used a range of techniques but only radio observations have really succeeded in allowing us to see through the thickest foreground layer of dust and stars," said researcher Renée Kraan-Korteweg from the University of Cape Town in South Africa. "An average galaxy contains 100 billion stars, so finding hundreds of new galaxies hidden behind the Milky Way points to a lot of mass we didn't know about until now." 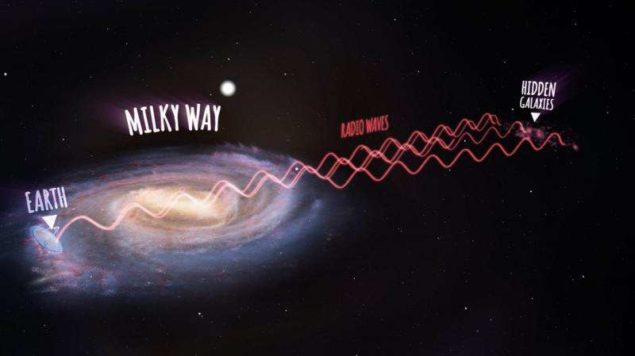 And the huge amount of mass under discussion led the scientists to better understand the cosmic phenomenon in the Zone of Avoidance. The great attractor anomaly, as the scientists call it, which seems be a mysterious space region drawing in the Milky Way and other many galaxies towards it. This anomaly which scientists believe equates more to the gravitational force of a million billion Suns since it was first observed and discovered in the 1970s. But the newly discovered number of hidden galaxies might help explain what is actually going on around in this space.

"We don't actually understand what's causing this gravitational acceleration on the Milky Way or where it's coming from," said Staveley-Smith. "We know that in this region there are a few very large collections of galaxies we call clusters or superclusters, and our whole Milky Way is moving towards them at more than 2 million kilometres per hour."

"What we see behind the Milky Way is very similar to the rest of the Universe," Staveley-Smith told Stuart Gary at the ABC. "But the density of galaxies in this region seems to be a fair bit higher than in the average region… and this contributes to gravitational tug that the region is able to exert on us and all other nearby galaxies."