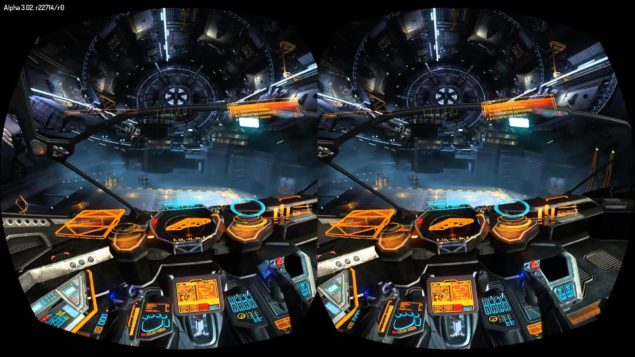 You'll be able to play Elite: Dangerous on the HTC Vive at EGX this week.

The HTC Vive, as Steam's VR, is set to be the first consumer available VR headset, one that'll be released potentially in November of 2015. To further be on the forefront of VR adoption, they're going to fully support SteamVR this holiday season with a free update.

"Back in December 2013 we were among the first to support virtual reality with a triple-A game, and for me, exploring, trading and fighting throughout Elite Dangerous’ 1:1 scale Milky Way remains an unequaled virtual reality experience. We have been working closely with Valve to bring Elite Dangerous to HTC Vive, and we are delighted with the quality we have been able to achieve."

The HTC Vive differs from the other entrants in that it includes a novel way to control your character within a 3D space. With the "lighthouse" base station, you can move within a 15x15ft room. That likely won't be used initially with Elite: Dangerous, though with larger ships, who knows what's possible.

If you happen to be attending EGX at the NEC, then you'll have a chance to preview the SteamVR support to see if it provides a different, or better, experience than Oculus does. The resolution is 1080x1200 per screen with a refresh rate of 90Hz.