Just as Force Touch is one of the most hyped up features when it comes to the iPhone 6S Duo, last year's iPhone 6 launch came with its fair share of leaks and speculations. Out of these, one of the most talked about was Sapphire display panels for the iPhone 6 and iPhone 6 Plus, with Sapphire being hyped as a miracle display that would be more stronger than the current Gorilla glass panels found on the iPhones. But Apple's supplier, GT technology didn't fare that well, and alongside its downfall, came the seeming end of the sapphire dream for the iPhone. 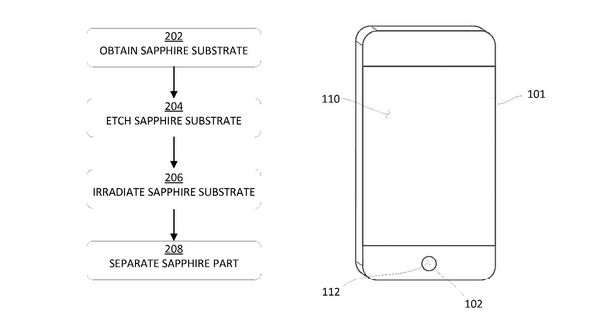 Even though Apple's plans for Sapphire on the iPhone might have been put on hold owing to GT Tech's poor financial management, that doesn't mean the idea is dead. In fact, the USPTO has just awarded the Cupertino manufacturer a new patent involving Sapphire displays. The patent makes it Apple's right to use multiple gas mediums for Sapphire cutting, and can be viewed in detail over here.

If you're not one for technical details, then in short, Apple's patent allows the manufacturer to use new and improved methods to develop Sapphire display panels for the iPhone. As can be seen in the image above, the Sapphire is first irradiated and then sliced into thin sheets using gas cutting mediums. This allows Apple to model the material exactly around its needs and specifications.

If you've taken a look at the document shared above, then you'd have seen that aside from camera lens and Touch ID sensor covers, which already use Sapphire, it also specifically described smartphone displays as one of the possible applications of this sapphire modelling. So the future of Sapphire on the iPhone seems far from dead right now, and Apple should be hard at work towards finding new suppliers as well.