The AMD Radeon RX 590 is launching next week, featuring the latest 12nm Polaris architecture. We have seen a lot of speculation about this graphics card but now we are finally getting a look at the custom models. One such custom model is the Sapphire Radeon RX 590 Nitro+ which comes with a non-reference design and has been detailed by Videocardz.

The AMD Polaris 30 GPU will be based on the 12nm process node. It's not known whether AMD will be relying on the Global Foundries 12nm process or the much advanced TSMC 12nm node which is being used to make the NVIDIA Turing GPUs. Considering that Polaris GPUs have been featuring a FinFET process design from Glofo, it won't be a surprise if AMD ends up using them for 12nm too.

As for the card itself, the Sapphire Radeon RX 590 Nitro+ is a fully custom design which comes with a beefy dual slot, extended board cooler. You can tell that the PCB is wider than the I/O bracket as Sapphire is making use of all of that extra space to provide the best VRM design and also the best cooling design. 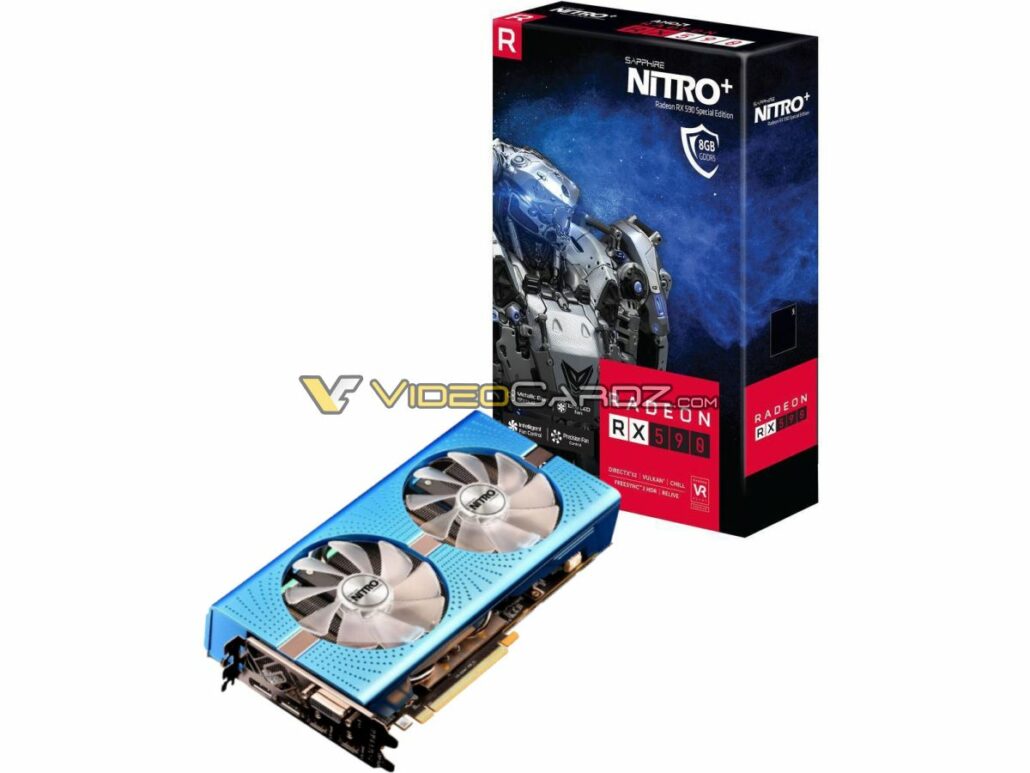 The cooler which is a dual fan design features two 100mm fans and is reminiscent fo the Sapphire Radeon RX 580 Nitro+ series, however, this time they have gone with a blue color scheme for the shroud and brushed metal design for the backplate. A large aluminum block with the copper base plate is situated over the memory and GPU die for better thermal dissipation. The card is powered by an 8+6 pin connector configuration while display I/O include 2 HDMI, 2 DP, and a single DVI port.

In terms of specs, the AMD Polaris 30 GPU would feature 2304 Stream processors, 144 TMUs and 32 ROPs. The clocks are not yet mentioned for the reference card but expect them to be slightly higher than the Radeon RX 580 graphics card. The VRAM includes the same 8 GB GDDR5 design, clocked at 8000 MHz across a 256-bit bus. Most of the performance benefits would come from the architecture tuning that is achieved with the 12nm die shrink but doesn't expect it to be a lot. The card is expected to hit the pricing around $250-$300 US.