The Radeon R9 Fury is one of the most demanded graphic cards in existence (particularly because of the competitive price point it occupies) but so far, all AIB variants were limited to the reference PCB. A report by PCGamesHardware reveals that Sapphire is planning to launch a brand new elongated PCB design which will not only offer higher quality components, but different video output ports as well - among other things. 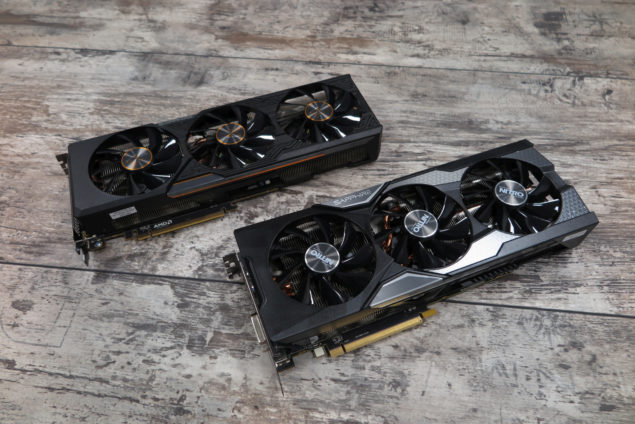 The name of the card in question is the Sapphire R9 Fury Nitro and is a successor of the Tri-X model already present on the market. It will have a custom PCB (obviously) as well a cool black back-plate. The GPU will be clocked at 1050Mhz and is expected to hit the shelves sometime in January 2016. The specifications of the card are now  307 x 125 x 45 mm as compared to the 300 x 110 x 40 mm of the Tri-X model. According to the specifications, the width of the card has also increased from 2.2 to 2.5 expansion slots (no practical difference). As far as aesthetics go, they are more or less the same with a few modifications to the shroud here and there.

The power is still drawn by the couple of 8-pin connectors and the recommended specification remains at 750 Watts. While it is not clear what specifically has changed in the custom PCB, the difference in size can be clearly observed in the picture above. Addition of phases in the power circuitry and use of higher quality capacitors is usually the go-to result of a PCB modification.  This would naturally allow for higher overclocking headroom than the Tri-X so needless to say, we should be seeing overclocked benchmarks of the same soon enough. We should also expect custom variants form other vendors now - since if Sapphire has been given the go ahead, so have the rest of the Add in Board partners.

The reference R9 Fury has exactly 4 video output ports – three DisplayPort 1.2s and one HDMI port (in this specific order). The Sapphire R9 Fury PCB introduces an additional DVI-D port for improved backward compatibility with older monitors (without a converter). The GPU casing itself has a different vent design as well. Thanks to the addition of an extra video port, half of the space previously occupied by the grills has been used up – what remains however, is more sparsely spaced than the original. This is a pretty good card and at the right price - would offer great value to PC gamers.