The complete lineup of Sapphire's Radeon 300 series cards have been leaked which include the latest R9 390X, R9 390, R9 380, R7 370 and R7 360. The latest models feature existing GPU cores which will get an aggressive pricing scheme to compete against NVIDIA's latest Maxwell GeForce 900 series lineup. The AIB cards have been leaking over the web since last week and the most recent leak was on MSI card which was also the biggest though their specs sheet was full of typos. Sapphire on the other hand has the specs correctly listed on their site which are detailed below. 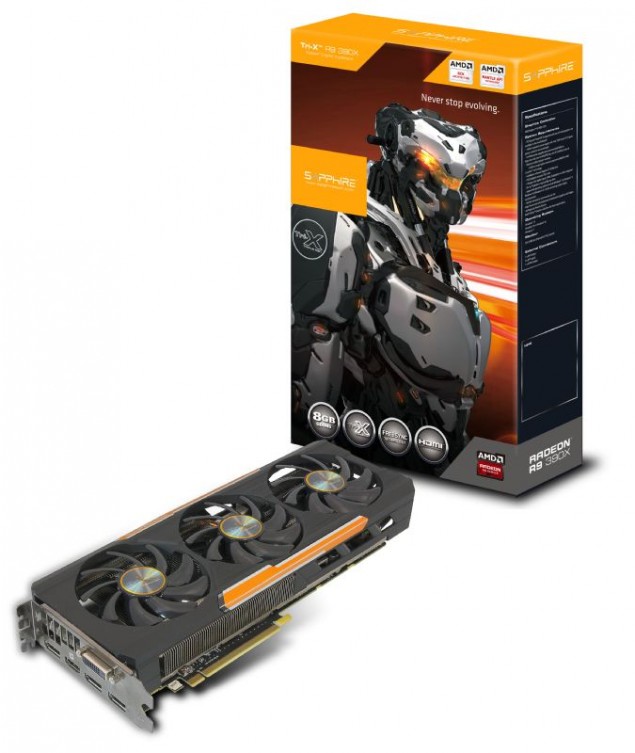 The most surprising thing about the Sapphire leak is that they actually list down two Fiji based graphics cards. The Radeon R9 Fury X that is the full Fiji XT based card and the Radeon R9 Fury which is based on the Fury Pro graphics cards. No specifications are available for these cards on the site but we did put up our own findings last week which are based off an highly credible source. The cards will be announced on the PCGamer Show hosted by PCGamer and AMD on 16th June 2015 with availability planned for later.

All of the chips that are featured in the new Radeon 300 series lineup make use of new naming schemes for existing GPUs. Starting off with the top end Radeon R9 390X Tri-X OC, we are looking at the Grenada XT (Hawaii XT) core with 2816 stream processors, 176 TMUs and 64 ROPs. The card features a clock speed of 1055 MHz and has the 8 GB GDDR5 VRAM clocked at 6100 MHz that runs across a 512-bit wide I/O interface. The card has a rated power consumption of 375W power through its dual 8-Pin connectors and comes with the latest Tri-X cooling design which is fitted with triple Tri-X fans with dual ball bearing design to efficiently push heat in the internals of the card which comprise of a bulky aluminum fin based heatsink array with 10mm copper heatpipes. There are five display outputs on the card which include a dual-link DVI, a HDMI and three display port connectors.

The Radeon R9 390 Nitro on the other hand features the Grenada Pro or Hawaii Pro core with 2560 stream processors but is clocked at 1010 MHz while the 8 GB GDDR5 VRAM operates at the same clock speed of 6100 MHz to pump additional bandwidth over the Hawaii based 200 series parts. This model features the Nitro cooling with a black shroud and a similar looking design as the Tri-X that doesn't make use of any fancy colors.

Next up, we have three Antigua (Tonga Pro) based cards which feature 1792 stream processors, 112 TMUs and 32 ROPs. Featuring a better architectural design over Hawaii, the chip comes at a clock speed of 985 - 980 MHz core and has the memory clocked at 5.7 GHz for the 4 GB and 5.5 GHz for the 2 GB variant. The memory operates along a 256-bit wide bus interface while the card has a rated power consumption of 225W. Note that the there are three models of the card which include an ITX-Compact variant, Dual-X OC variant and a Nitro variant. We have seen the compact and Dual-X OC variants with the R9 285.

The next model is the Pitcairn XT based Radeon R7 370 graphics card which has 1024 stream processors, 64 TMUs and 32 ROPs. Based on the same design as the R7 265, the two models feature 2 GB GDDR5 memory which include a Nitro and a Dual-X OC variant with core clocks of 1000 MHz and 985 MHz respectively. The cards have the memory operating along a 256-bit wide bus interface. These models have a power consumption rated at 150W while the display outputs include a Dual-Link DVI, HDMI and a Display port connector.

Last up is the Radeon R7 360 which is based on the Bonaire Pro core with 768 stream processors that is rebadged to Tobago. The chip is clocked at 1060 MHz while the 2 GB GDDR5 VRAM comes clocked at 6.5 GHz across a 128-bit bus interface. We should see a Display Port, HDMI and DVI-I connector on this card also has a power consumption rated at 150W. You can see details of the reference models in the table below:

Note: Many Thanks to Vladimir Lenin for the tip!