AMD's Fury launch happens in a few hours and a pub (Eteknix) has already leaked the press deck along with much of the juicy details. Almost everything revealed in this presentation has already been covered by leaks at one point or the other, but this should still serve to be an authentication before the actual authentication (talk about redundancy). The most important thing however, are the benchmarks present in this slide deck, which show the Fury GPU outpacing the GM204 based GTX 980 from Nvidia. 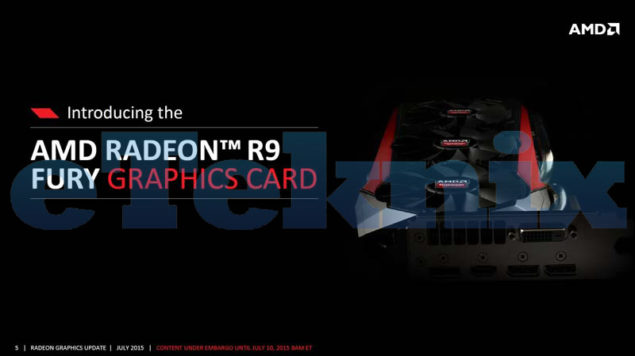 I thought I would disregard the traditional hype building format and just start with the most exciting part. Currently the press deck bears the Eteknix logo but once the NDA lifts, we will post our own version with the clear slides. The benchmarks show the Radeon R9 Fury GPU beating the GTX 980 by a decent margin. If you look at the scale used, you will notice that the difference is between 8-6 frames per second on each game at 4K resolution. The R9 Fury appears to be capable of the 4K @30 standard, which is pretty impressive. Ofcourse this is a cherry picked, first party benchmark and should absolutely be treated as such. Third party reviews are going to be surfacing real soon too and we will know for sure once they do so. 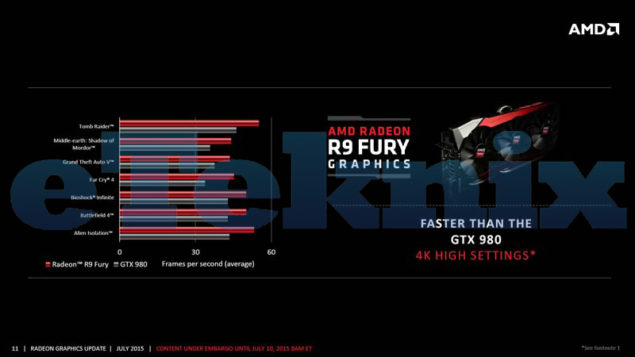 Here is the specification slide confirming our prior leaks of the same topic. The R9 Fury will be powered by cut Fiji die with 3584 cores. It will house the standard 4GB of HBM clocked at 500 Mhz with 512 GBps effective bandwidth. The TDP of the card is 275W and will bce clocked at 1Ghz (turbo). Based on the 28nm process, this GPU will perform remarkably for a cut die. The performance of the 3584 die will not scale back linearly from the full 4096 sp count core. It will actually be slightly higher than just a 12.5% decrease from the R9 fury. The reason for that is that only the ALUs are cut, most of the render back end remains the same. So the bottleneck effect experienced by the R9 fury's ALUs will be far less here, translating into performance advantage. 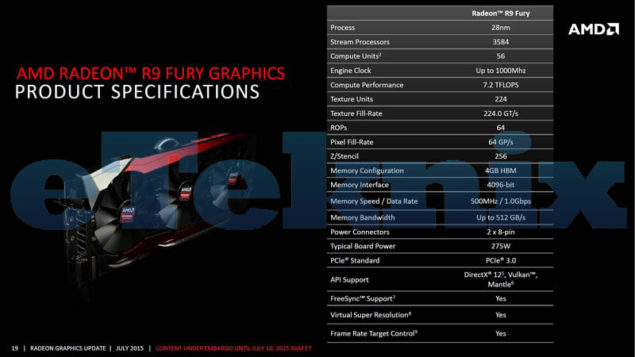 Now unlike the X-variant, the Radeon R9 Fury is not a reference card, it will have custom AIB boards and you should see all variety of designs from AMD exclusive and dual AIBs. Two versions have already been detailed in the slides below. These versions were actually revealed by Hassan just yesterday, but I will go into a bit more detail about them. The AMD Radeon R9  Fury Strix is a very impressive card with DirectCU III cooling technology (0db gaming at light loads) and also the return of the DVI port.

The fury did not have a DVI port and it caused a bit of a racket, but rest assured, most Fury's will rock this port. The Sapphire Tri X Radeon R9 Fury will rock the usual three DisplayPorts and one HDMI. Unfortunately, the cards do not support the latest HDMI 2.0 standard, and stick to the HDMI 1.4 version. This is because AMD is pursuing DisplayPort as the go-to standard for gaming tech.  Well, given below are rest of the slides worth watching, so happy waiting till the Fury launch.