Sapphire is teasing a new liquid cooled AMD graphics card on youtube, could this be the R9 380X ? Dubbed project NFC "Not from concentrate". NFC is a term used in the food industry to indicate that water hasn't been extracted from the juice of a fruit. "From concentrate" indicates that the natural water of the fruit has been extracted from the juice, the resulting concentrate is then pasteurized and processed, finally water is added. So NFC indicates more of a pure and unaltered form so to speak. 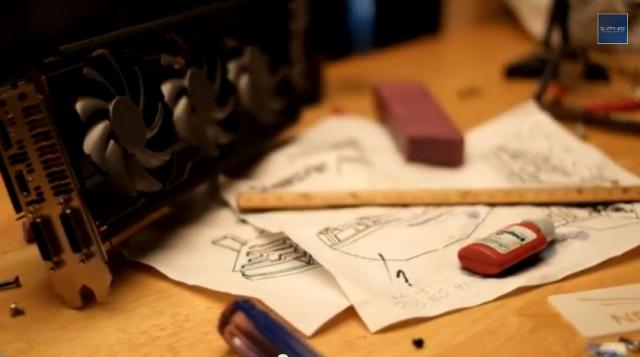 Sapphire hasn't outright said that project NFC is about liquid cooled graphics cards. Since this is a teaser it's expected that the company would play its cards close to its figurative chest. However Sapphire did include many hints in the video to suggest that project NFC, apart from the name, is actually about Sapphire using liquid cooling for GPUs. Such as liquid cooling fittings, possible drawings of a GPU block and water vapor.

We still don't know for sure if this is actually a brand new liquid cooled GPU or if Sapphire is prepping a new liquid cooling unit for an existing graphics card. I wouldn't rule out either possibility. We've seen many legitimate reports indicating that AMD is introducing an enhanced version of the Hawaii XT GPU, which currently powers the R9 290X and R9 290, early next year.

The new enhanced Hawaii is said to be AMD's last GPU before the new graphics refresh in 2015. And its main purpose is to hold the ground until Fiji XT arrives a few months later. We've also seen reports of AMD actually using a similar version of the Hydra liquid cooler of the R9 295X2 on an unannounced single GPU graphics card.

It's quite plausible that it would actually end up on the enhanced Hawaii rather than Fiji. Simply due to the fact that Fiji wouldn't actually need any liquid cooling as it consumes significantly less power than Hawaii according to the various leaked reports. And also due to the fact that this shroud was leaked around the time when AMD was rumored to launch a liquid cooled R9 295X graphics card based on enhanced Hawaii silicon. However it was eventually delayed to be made more competitive with GM204. I wouldn't very surprised either if AMD decides to give the enhanced Hawaii GPU an R9 300 series name.

The new liquid cooling unit from Sapphire might be their own customized version of AMD's reference Hydra cooler. We may see it introduced with a brand new GPU or the fabled Hawaii XTX. Either way this underlines the on-going interest of the AIBs to explore water cooling for commercial products. This could mark the beginning of a future trend of more affordable liquid cooled graphics cards. A trend that we'd be very happy to see come to fruition.