Nvidia's GM200 GPU / Titan 2 was benchmarked against AMD's upcoming Fiji XT GPU / R9 380X and Bermuda XT / R9 390X courtesy of a new leak by chiphell. As usual take this with the handy grain of salt as there's no way to confidently verify leaks such as this.

.
There's really no way to tell for sure what Nvidia and AMD may call the products based on these GPUs in the future. So names such as Titan 2, R9 380X and R9 390X will only serve as place holders to help you identify the positioning of the graphics cards in question.

Without any further delay let's get into the contents of this new leak.

1- The author on Chiphell claims that both Fiji and Bermuda i.e R9 380X and R9 390X are manufactured on a 20nm process node by Globalfoundries. The author did not specify which process GM200 is built on however.

2- There are two versions of GM200, a cut down version with 21 SMM units amounting to 2688 CUDA cores and a fully unlocked "full fat" version with an unknown number of SMMs / CUDA cores.

5- Bermuda XT / R9 390X is 65% faster than the R9 290X / Hawaii XT and will feature a hybrid "Hydra" liquid cooling unit similar to the R9 295X2. This matches the previous leak by a Chinese source that we saw a few months back, which indicated that AMD will be using liquid cooling on a future single-GPU graphics card.

This brings us to the actual benchmarks. The author on Chiphell included benchmarking results that spanned 20 different games as well as power consumption figures under Battlefield 4 multiplayer. 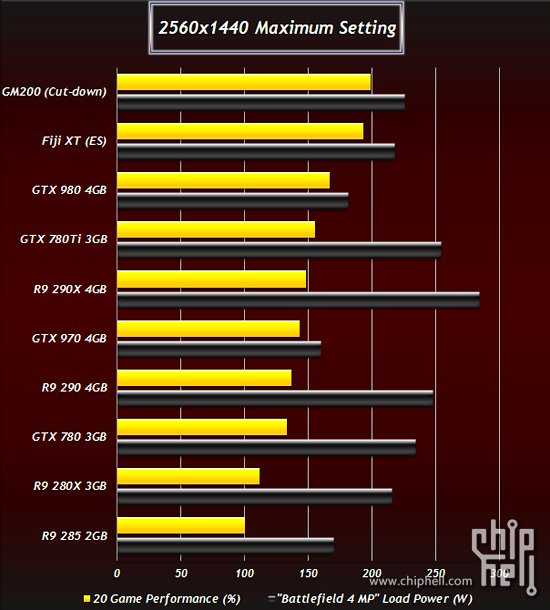 From the above graph we can see that both the cut down GM200 GPU and the Fiji XT engineering sample are very close in terms of performance and power consumption. GM200 edges out Fiji XT / R9 380X slightly in performance while the 380X is slightly ahead in efficiency (perf/w). The sizable gains in efficiency by AMD may be attributed to the new 20nm process as well as the use of 3D stacked High Bandwidth Memory, called HBM for short. The new memory promises to consume half as much power as GDDR5 and perform nearly 9 times faster.

Unfortunately the author did not include power consumption figures for the "full fat" fully unlocked GM200 GPU nor for the Bermuda XT/ R9 390X but said that the power consumption for the latter was in an acceptable range. I'd expect that both Bermuda and the fully unlocked GM200 GPUs to hold the same sort of power efficiency figures as their smaller siblings the cut down GM200 and Fiji XT. 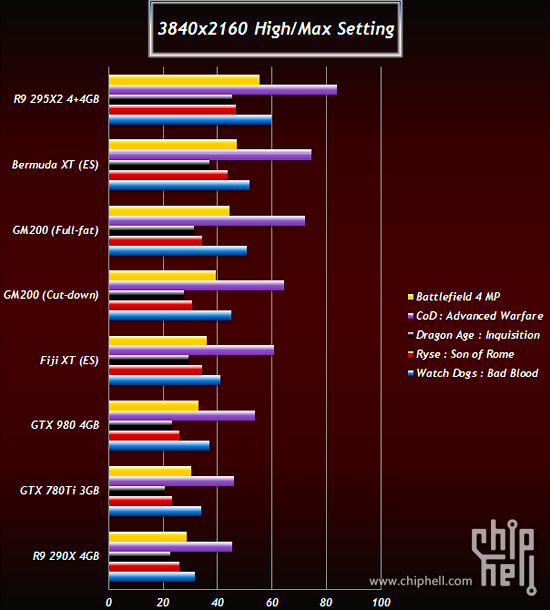 Above we can see both Bermuda XT / R9 390X and "full fat" GM200 / Titan II compared. Neither of the flagships outperform the R9 295X2 but they come close.  The 390X edges out the Titan II in BF4 MP, CoD : AW and Watchdogs while showing a considerable lead in Dragon Age : Inquisition and Ryse : Son of Rome. The performance of both is quite astonishing. Providing a true next generation leap that puts them significantly ahead of anything out right now.

Considering that these are engineering samples the final products should perform even better with higher clock speeds and improved drivers. Especially if the R9 390X reference design ends up with a liquid cooling unit as the leaker suggests. I'd expect to see very impressive temperatures, acoustics and huge overclocking potential.

Lets just hope that AMD and Nvidia don't keep us waiting too long for these phenomenal and most likely quite expensive GPUs.