Chiphell, a source of many leaks has yet again posted a chart which might be related to AMD's next generation Radeon R9 390X graphics card. The format used for the chart has appeared at Chiphell forums many occasions such as Kepler's launch, Tahiti's launch and even the most recent Volcanic Islands "Radeon R200" and Maxwell GM204 launch and turned out to be quite accurate in terms of the performance numbers it provided. This time we are looking at alleged performance and power consumption numbers of AMD's next powerhouse GPU.

Alright, so while I have given my reasons to why I believe these charts to be somewhat accurate, the one we are looking at may not be indicative of the final product as the user who leaked this has mentioned it as a ES "Preview Sample" which is very much like the Radeon R9 290X "Hawaii" samples we saw months back during its launch timeframe. One more thing, the name "Radeon R9 390X" isn't actually confirmed for the card being shown in the chart, its speculated based on the fact that it is the fastest shown graphics card in the chart and hence leads to the conclusion that this could be the upcoming "flagship" card from AMD to rival NVIDIA's GM 204 chip architecture. I still advise to take these charts with a grain of salt since the launch is still a few months away in Q1 2015 as reported by several hardware websites but the results shown are really interesting, especially due to the fact that these are from a early test sample and final specifications such as clock speeds have not yet been finalized.

The user posted two charts, the first chart, as usual, shows average performance in several gaming titles such as Alien Isolation, Assassins Creed: Unity, Dragon Age: Inquisition, Metro Last Light Redux, etc (won't list all the games since the list is huge). The games were testing across a wide range of graphics cards from NVIDIA and AMD at 2560x1440 resolution with IQ settings set to maximum detail (2xSSAA, 4xMSAA, SMAA, FXAA). The test platform included a Intel Core i7-4790 clocked at 3.60 GHz and the drivers used were 344.75 WHQL for NVIDIA cards and Catalyst 14.11.1 BETA for AMD cards.

Coming to the results, I am shocked with the performance increase over Maxwell and the Radeon R9 290X. The alleged Radeon R9 390X has a average performance rating of 65.6 FPS across all titles while the NVIDIA GeForce GTX 980 has a performance rating of 56.6 FPS which is a 16% performance increase. The GeForce GTX 780 Ti and Radeon R9 290X end up with 52.6 FPS and 50.1 FPS respectively. The user couldn't run a crossfireX testing since he had just one sample onboard with him but the thing I laughed about the most is the fact that he has the card labelled as "Captain Jack" (from Pirates of the Caribbean). Now this is both funny and interesting, funny since we are talking about Jack Sparrow over here, interesting because this is a hint that this could be the first "Pirate Islands" cards to hit the AMD R 300 series lineup. The results say for themselves, the ES is faster than NVIDIA's offerings but NVIDIA had one thing better than AMD, that was the power consumption. Till now, we thought AMD's next card would be a powerhouse in performance but will end up with similar power consumption as Hawaii.

That's not the case anymore, AMD seems to have devised a way to make its GCN core much more power efficient. Judging from the second graph, the alleged Radeon R9 390X graphics card has a power consumption across games rated at just 197W. This brings it under the 200W category of rival Maxwell parts. The rating is still a bit higher than the GeForce GTX 980 and GTX 970 which have the power numbers rated at 185W and 167W respectively, but given the performance numbers, the card looks well made. The Radeon R9 290X on the other hand is a power sipping juggernaut rated at 242W in standard more and 279W in uber mode. So there's a major difference there. We don't know if its 20nm in works or a similar 28nm technology which Maxwell has adopted by boy do these numbers look good.

As far as specifications are concerned, we don't really know much about them and the accuracy of recent leaks (even including this one) remains unknown and would only be found out when the cards officially launch. The Radeon R9 390X has gone by several codenames, the most recent one is that it is adopting the Fiji XT chip with some rumored specifications available here along with a high possibility that it may adopt the new HBM VRAM standard. Aside from that, it uses a new cooler which is a modified version of the one featured on AMD's 295X2 Vesuvius.

Well that's all for the leaked information but it looks like the battle between both teams is going to be tense. If AMD manages to outperform NVIDIA's Maxwell with their new cards, then NVIDIA will be forced to launch their GM200 cards for consumers in 1H of 2015. We so far have literally no information available on the GM200 and the cards but from the looks of it, it will be a whole new series featuring the daddy Maxwell cores. 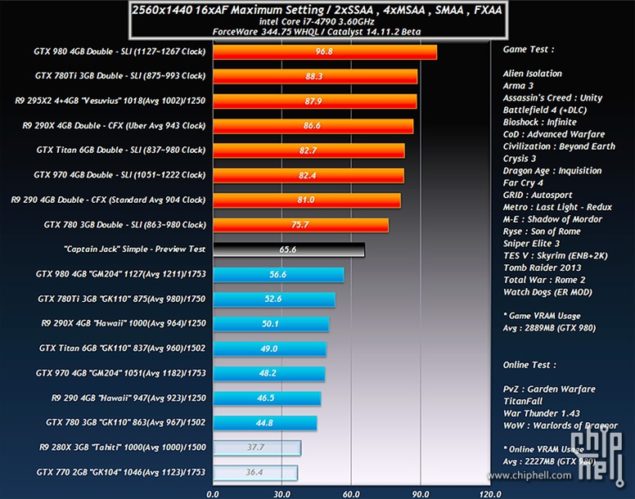