The Sapphire HD 7950 MAC Edition  was showcased at CeBIT 2013 and features specifications of a reference Radeon HD 7950 GPU such as 1792 stream processors and a 3 GB GDDR5 memory running across a 384-bit interface. Clocks are maintained at a slightly lower 800 MHz for core and 5000 MHz (5.0 GHz) memory clock frequencies. GPU Boost is not available on the model from Sapphire.

While the Sapphire HD 7950 MAC Edition is essentially built for MAC users, it also offers compatibility with Windows based PCs. The HD 7950 supports Dual Firmware which can be switched through a controller located near CrossFireX gold-fingers. It can be adjusted in left or right directions to enable UEFI for either Windows or MAC OS X modes. 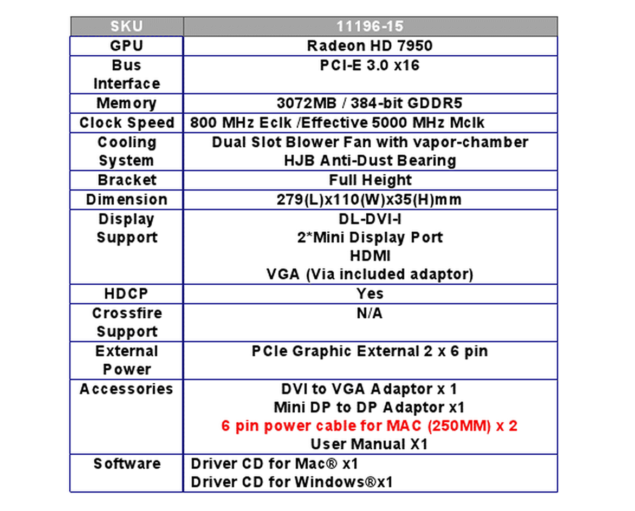 Design wise the card looks the same as a reference Radeon HD 7950 except that the HD 7950 MAC edition comes with a full white cooler shroud and a dual slot heatsink that is cooled off with a single PWM fan. The internal Vapor Chamber heatsink offers cooling to the Tahiti GPU core. Power is supplied through two 6-Pin connectors. Display outputs include Dual Link DVI, Dual Mini display ports and an HDMI connector. The HD 7950 MAC Edition 3GB GDDR5 is available now for a suggested retail price of $ 479 which is a bit pricey considering the Radeon HD 7970 GHz Edition can be bought at around the same price or even lower. 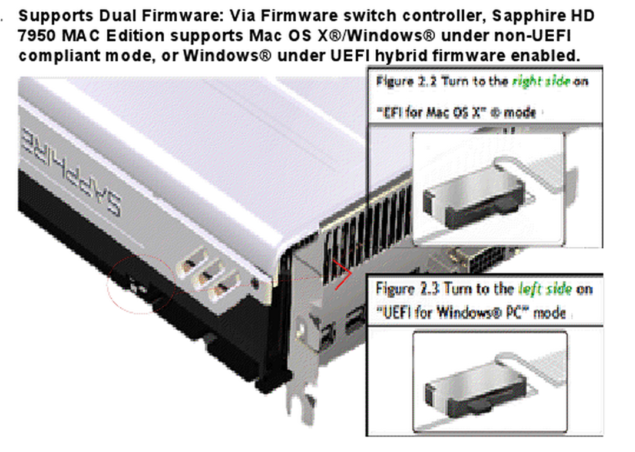