Samsung Trademarks New Term for Devices With ToF Sensors; Non-Flagship Handsets Might Get Treated to Such Hardware

The Samsung Galaxy S10 5G will not be the last handset armed with a ToF sensor and it looks like more devices launching in the future will get treated to the same hardware. Quite recently, the Korean giant filed an application for a trademark with the European Union Intellectual Property Office (EUIPO) and it seems like it can have something to do with the upcoming Galaxy Note 10. The company’s latest trademark is the name 'Make & Play 3D' and it is categorized as Class 9. A quick glance at the description shows that the trademark is connected to Time-of-Flight (TOF) optical sensors.

New Feature Might Debut With the Note 10 Range, Followed by the More Cheaper Handsets

Read into the description further, and you will find out that ‘Make & Play 3D’ can potentially be a software solution. Other than that, there are no details, so we can surmise that the term ‘Make & Play 3D’ will complement the ToF sensor to improve its working.

There are only a couple of Samsung smartphones that are equipped with a ToF sensor, including Galaxy S10 5G and Galaxy A80. The upcoming Galaxy Note 10 is rumored to come with two such sensors and the Make & Play 3D feature might come pre-installed with it. It’s also possible that Make & Play 3D is an app that Samsung might also make available to other phones with ToF sensors in the future.

However, at this point, it’s all guesswork, so we recommend that you do not read too much into the report and wait for Samsung to provide more details. If the app/feature does indeed make its debut with the Galaxy Note 10, we can expect to find out more about it on August 7, which is the rumored launch date of the phone. 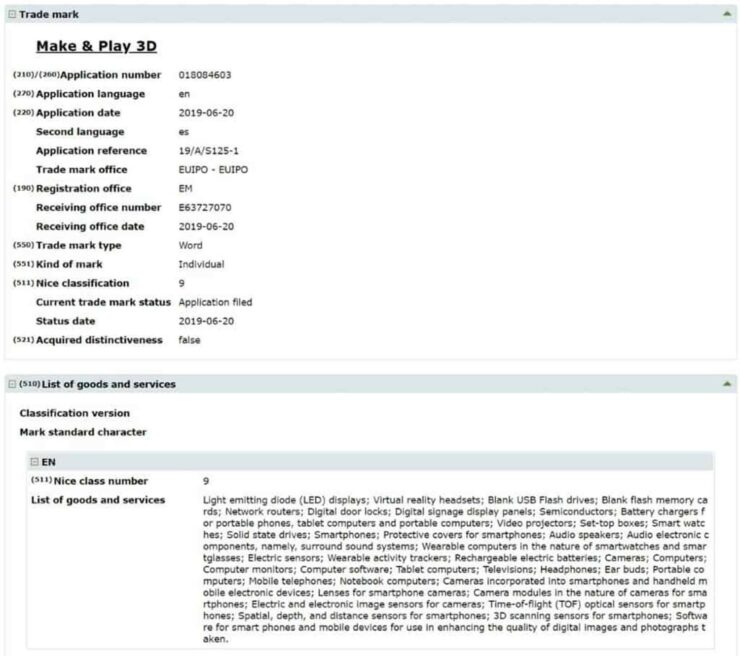 If rumors are to go by, Samsung is seriously trying to up its camera game with the upcoming Note 10. The phone is tipped to come with three variable aperture settings, which can vastly improve the quality of the pictures taken in low, medium, and brightly lit surroundings. The camera will reportedly stop at F/1.5, F/1.8, and F/2.4 to improve flexibility. Other than that, the phone will also presumably feature the Sound on Display technology to eliminate the need for a speaker earpiece.

Needless to say, the Note 10 is shaping up to be one exciting phone, but we’re happy to know that Samsung will port the more expensive hardware in its less expensive offerings, but that will happen in the distant future.