Samsung Galaxy Tab S7 Will Have Snapdragon 865 and 8GB RAM

If speculations are correct, then Samsung is currently planning on releasing the Galaxy Tab S7 and Tab S7 Plus. The announcement should be taking place alongside the Galaxy Note 20 series at the Unpacked event in August. The devices have made the rounds on the internet, and we have had some looks at the renders, as well.

The latest leak is coming from GeekBench as well, and as per the listing, we have some information on the SoC alongside the RAM capacity that the Galaxy Tab S7 will be bringing to the table.

It is pretty obvious that Samsung is trying to take on Apple with the Galaxy Tab S7. After all, such flagship specs are reserved for that. The GeekBench listing shows that the tablet will come with 8GB variant, as well. This is what the listing reveals. 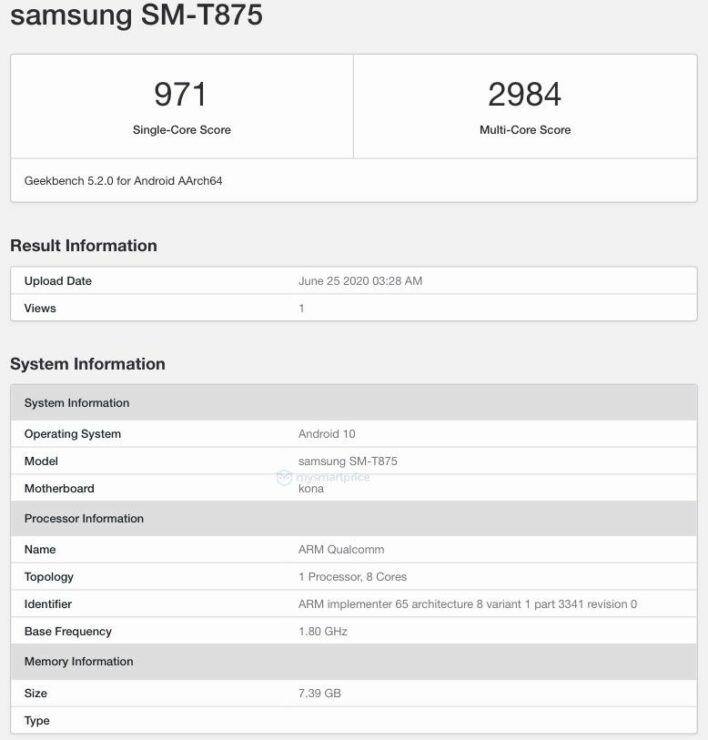 The source further reveals that the Galaxy Tab S7 will be bringing the Snapdragon 865 SoC as well. Which is a great choice, considering how powerful the chip is. The Geekbench score that the device posted is impressive, to say the least. But we are not sure how the real-world performance is going to be like.

Considering how it will most probably release in August, the Galaxy Tab S7 will most likely be running on Android 10 on top of One UI 2.1. Further details hint at an 11-inch 120Hz panel, a 7,760 mAh battery, and 5G support along with S-Pen. It seems that Samsung is aiming to fire on all fours.

Whether or not the Tab S7 will support all the powerful hardware we have been hearing so far is still something that we have to see. Keep checking back for more coverage on the device and let us know what you think of Samsung's attempt to take on the Apple iPad.