As the day passes, the leaks don't seem to be coming to an end it seems. We've seen one device after the other leak today, which includes the likes of Apple's iPhone 6S, iPhone 6S Plus, the upcoming OnePlus 2 and even Samsung's Galaxy Note 5, which saw one of its first case leaks yesterday. Well, you can add the Samsung Galaxy S6 Edge Plus to that list, as some more cases for the Korean manufacturer's 'upgrade' Galaxy S6 Edge variant have leaked today. 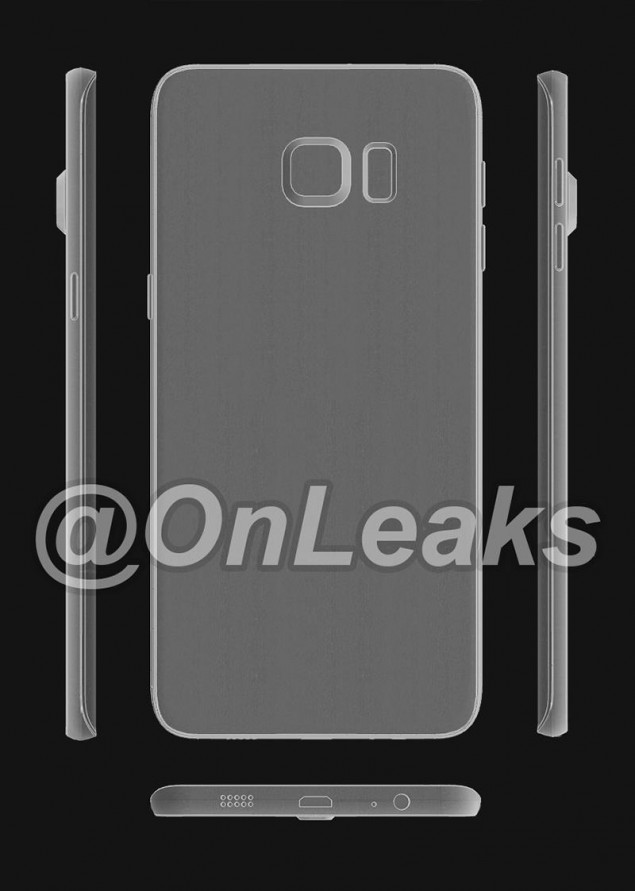 Onleaks has been busy over the past couple of days folks and we've seen several leaks targeted exclusively towards Samsung's 2015 lineup of devices. After the  Korean manufacturer's launch of the Galaxy S6 Duo earlier this year was a massive success, looks like Samsung's eager to build on its successes and one of the ways it intends to to so is by launching another Galaxy S6 variant. The Galaxy S6 Edge Plus case images that have leaked today show the device to be nearly identical to this year's original S6 launch.

You can take a look at the device's bottom, which features the USB connector port, a speaker grille and a headphone jack, all of which are similar to the Galaxy S6 Edge. Both the curved edges of the devices are also visible and looks like Samsung's looking to further sell the Galaxy S6's design strengths, but this time with a Qualcomm processor under the hood. The Galaxy S6 Edge Plus will reportedly be coming with the Snapdragon 808 on board, rather than the Exynos 7420, which was Samsung's original choice for its 2015 flagship smartphones.

Perhaps this move will end up making both the manufacturers move forward from the Snapdragon 810 debacle earlier this year. With its resources, Samsung clearly seems to be able to launch an entirely new device with a Qualcomm SoC. Lets see how things pan out for both of them after the S6 Edge Plus' launch. Stay tuned and let us know what you think in the comments section below.