It's not a secret that Samsung's facing trouble with its high-end smartphones. The Korean tech behemoth has a ton of resources at its disposal, but these have not translated into strong market performance. Change is afoot at Samsung, especially as its heir-apparent Jay Y. Lee is not only shaking up the company's management but also taking a hands-on approach with Samsung's flagship and mid-level smartphones.

Rumors and leaks for the Samsung Galaxy S10 lineup, not due until early 2019 have surfaced since 2018. Courtesy of these, we've got a rough idea of Samsung's overall strategy and key specifications for the gadgets. Today, we just might have more details for one critical feature. Take a look below for more details.

One of the most pervasive rumors for the Galaxy S lineup is for virtual fingerprint sensing. It first started to surface prior to Samsung's Galaxy S8/S8+ launch. Since then, all major Galaxy S and Note launches have witnessed it prior to launch. However, 2019 just might be the year for this feature to finally materialize on a high-end Samsung device.

Rumors and reports out of the Korean press and Taiwanese supply chain sources believe that Samsung will use Ultrasonic fingerprint recognition on the Galaxy S10 lineup. The technology is different from what's offered by Chinese manufacturers as it's more accurate and quicker. Samsung's mobile head DJ Koh himself admitted this fact when he boldly claimed that the company will not use optical fingerprint recognition (found on devices such as the Vivo X20 Plus) due to 'poor user experience'. 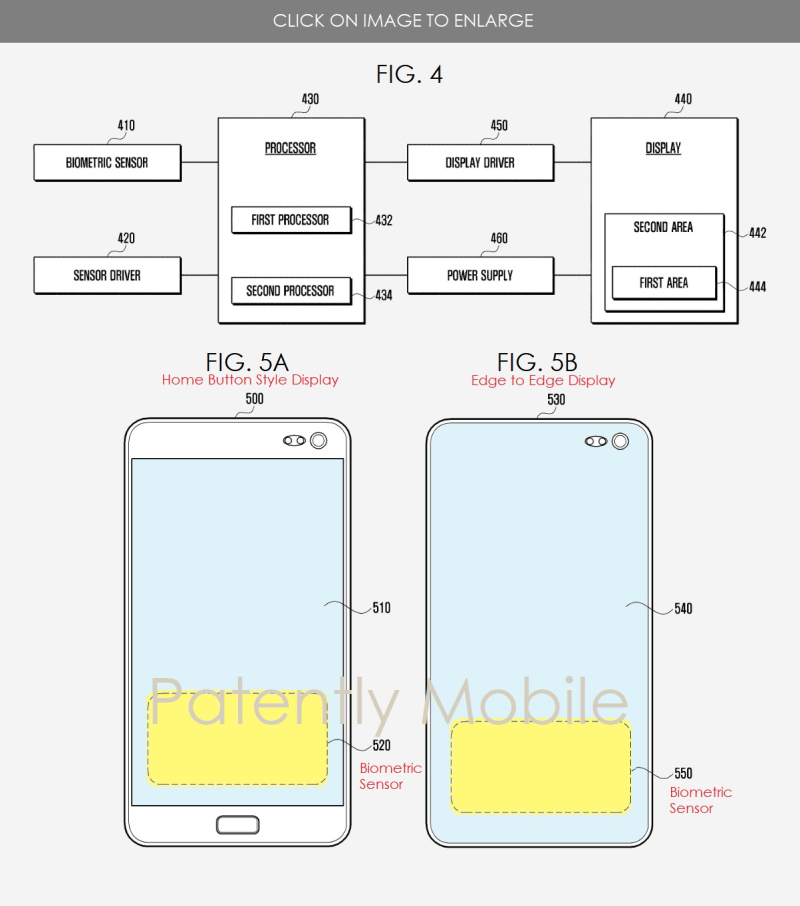 Samsung's latest patent for biometric sensing granted by the United States Patent and Trademark Office displays several options to use the technology on the smartphone. According to the details, Samsung is free to use either an optical or an ultrasonic sensor for these purposes. The document displays two different form factors in which the sensor can be used. These are displayed in FIG. 5A and 5B above.

Additionally, the ultrasonic sensor can also be used at the side of the smartphone, within a button or at the device's back. It can also house an image sensor which will take a snapshot of a user's fingerprint and relay this information to the device for authentication. Ultrasonic fingerprint sensing is expected to feature on two of Samsung's Galaxy S10 smartphones next year, as several sources expect the company to launch three devices.

Another feature that's rumored for only the largest Galaxy S10 (tentatively dubbed as the Galaxy S10+) is a triple camera setup. Samsung's rumored to go all out for the device in technological terms, hoping to fully showcase its prowess. Whether all this will translate into sales, only time can tell. Till then, stay tuned and let us know what you think in the comments section below. We'll keep you updated on the latest.