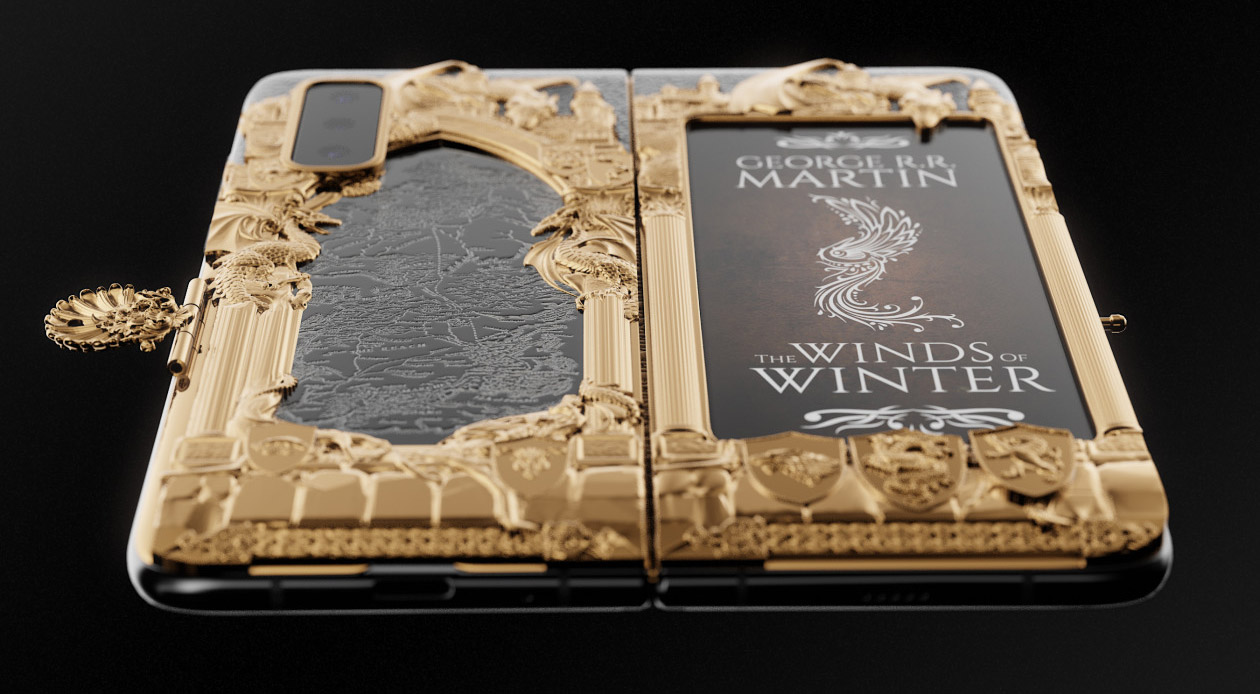 While we still don’t know if and when the reworked Galaxy Fold will be released, the Russian company Caviar, which makes luxury accessories and customized phones, has now made a Games of Thrones Galaxy Fold edition. Since the phone’s design is reminiscent of a book that folds inwards, Caviar drew inspiration from the unreleased book “The Winds of Winter,” which forms a part of the “Game of Thrones” series. The uncompleted book is being penned by George Martin, with the author claiming that the ending of the novels will be far different than the ending of HBO’s show.

The body of the Galaxy Fold has been turned into the cover of the book and the outer parts of the device have been given a sculptured, gold themed design, taking a cue from the “A Song of Ice and Fire” saga on which Game of Thrones was based. The front is graced by the map of the Seven Kingdoms.

“While thinking over the fact that the opening smartphone format reminds a book, the brand’s designers gave rein to their imagination and turned the body of this extraordinary device into a cover of the long-awaited book by George Martin, “The Winds of Winter”, which has not been completed yet. The splendid, detailed, volumetric bas-relief covered with gold refers us to the story of the famous “A Song of Ice and Fire” saga, turned into an epoch-making series “Game of Thrones” – the important and recognizable symbols of houses, as well as the map of the Seven Kingdoms appear in front of us in all their splendor and surround the front screen as a precious picture.”

Caviar believes that quite like George Martin’s work, the Galaxy Fold is also a captivating work of art and the luxurious customized edition of the phone is a treat for hardcore fans of Game of Thrones.  It goes without saying that the sales will not begin until the Galaxy Fold is officially released, but pre-orders are now open. To appeal to customers who aren’t ‘head over heels’ about Game of Thrones, Caviar has also readied more designs of Samsung’s foldable phone with leather and carbon.

If you think at $1,980, the Galaxy Fold was too expensive, then the price of the Game of Thrones Edition is truly jaw-dropping, as it costs a whopping $8,180. However, Russian consumers can get it for around $7,700. A few days back, it was being alleged that Samsung has addressed the Galaxy Fold flaws and is testing the revised hardware with South Korean carriers. However, it still remains to be seen if the device is durable and given these concerns, it wouldn’t be very wise to shell out $8,180 on the Game of Thrones Edition, at least right now.