Samsung Confirms One UI 4.0 Beta for Galaxy S21 in Germany

Earlier today, I reported how Samsung is internally testing the One UI 4.0 beta on Galaxy S21 series in China. We already know that the company will release the beta program later this month across various regions. However, a confirmed list of regions is still missing. Well, Samsung has gone ahead and confirmed that the Android 12-based One UI 4.0 is definitely hitting on the Galaxy S21 device in Germany, and while there is no specific date, this certainly is a good idea.

The confirmation is coming straight from Samsung on their community forums, and the company has said that the beta will be coming to all Galaxy S21 devices "soon." Again, the exact date is still missing at the time of writing, but based on the details that have been revealed in the past, this could take place in September, at the very least.

Samsung Adds Germany to the List of Countries That Will Start One UI 4.0 Beta Program starting with Galaxy S21.

If you look at Samsung's history with One UI beta programs, the latest One UI 4.0 will start hitting countries like China, India, Poland, the U.S, the U.K., Germany, and South Korea. 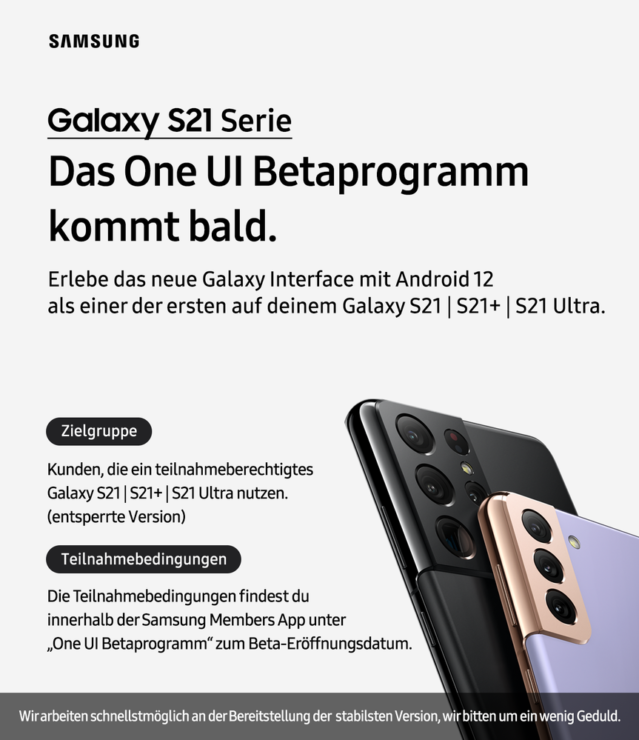 It should not surprise that the beta program will start with the Galaxy S21 series, and then it will trickle down to other devices such as the Galaxy Note 20 series and the Galaxy S20 series. You could also expect it to land on the Galaxy Z series, but we are unsure about that at writing.

One UI 4.0 will introduce a refreshed design based on the Material You design guidelines that Google introduced with Android 12. At the moment, Samsung's One UI is perhaps one of the best custom Android skins, and I am really looking forward to seeing what Samsung does with the Android 12 and all the design guidelines. Will Samsung be able to provide an even better experience than what Google has to offer? We can only wait and see.