Samsung has established a solid name for itself when its flash-based storage products are taken into consideration and the South Korean tech giant has reached another milestone by announcing the world’s largest solid state drive. Take a guess as to how large its capacity is going to be. 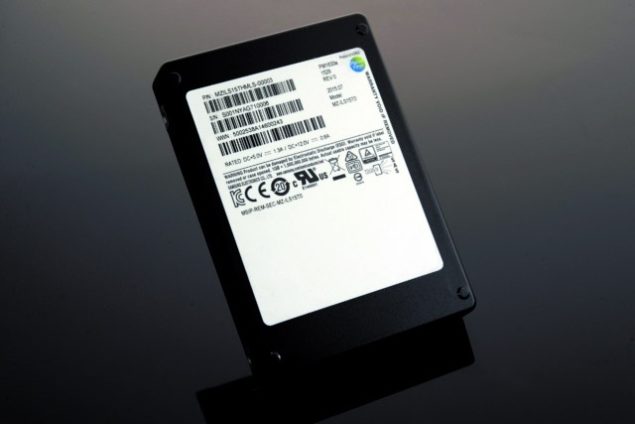 Samsung Announces 15TB Solid State Drive – You Will Definitely Be Interested In Purchasing It, But There Is A Catch

After announcing its 256GB flash memory chips using the UFS 2.0 standard that will be used in future flagship smartphones, Samsung is now shipping the world’s largest solid state drive by capacity and it is called PM1633a, featuring a capacity of 15.36TB. While majority of consumers would easily be sated with a 1TB SSD, Samsung goes with an overkill approach and announces a massive capacity SSD.

Jung-bae Lee, Senior Vice President, Memory Product Planning and Application Engineering Team is confident that Samsung will retain its position as the industry’s leading provider of flash-based storage products. He states the following:

“To satisfy an increasing market need for ultra-high-capacity SAS SSDs from leading enterprise storage system manufacturers, we are directing our best efforts toward meeting our customers’ SSD requests. We will continue to lead the industry with next-generation SSDs, using our advanced 3D V-NAND memory technology, in order to accelerate the growth of the premium memory market while delivering greater performance and efficiency to our customers.”

The only catch is that these drives will initially be targeted to enterprises, suggesting that it will obviously carry a ludicrous price tag, as it should be given the amount of storage packing inside it. Unlike consumer-based SSDs that feature a SATA port, or even an mSATA port, this particular drive, is based on a 12Gb/s Serial Attached SCSI (SAS) interface, and at this current time, Samsung has not provided us with an update if a similar capacity variant sporting a SATA port will be introduced for us.

While the capacity is definitely an overkill for mainstream desktop computer owners, it will definitely be on the bucket list for several enthusiasts out there, if not for that single interface compatibility issue. PM1633a comes in a 2.5 inch form factor, meaning that it is slim enough to fit inside the smallest of server racks.

The SSD from Samsung is enabled by combining 512 of the company’s 256Gb V-NAND memory chips. The 256Gb dies are stacked in 16 layers to form a single 512GB package, with a total of 32 NAND flash packages in the 15.36TB drive. As a result, such an SSD will deliver unprecedented performance, and reliability and efficiency.

See, it is not just those companies with large amounts of capital that will have the opportunity to purchase Samsung’s latest SSD. Firms that operate on a smaller scale will also be able to get the chance.