Earlier in December, Samsung had confirmed that the South Korean phone maker will upgrade its Galaxy S7 and S7 edge users directly to Android 7.1.1. Considering that all other major Android phone makers have already delivered Android 7.0 Nougat to their flagship smartphones, Samsung is the only one lagging behind. Samsung has now confirmed that the update will finally arrive in January.

Samsung started the Galaxy Beta program in November enabling registered users to try out Nougat and help the company iron out issues before the public release. Users received the fifth update in this beta process earlier this week, and everyone wondered when would Samsung deliver the public Nougat update for Galaxy S7 and S7 edge.

Samsung has now announced to its Galaxy Beta family that it will release the final and official build of Android 7.1.1 for Galaxy S7 and S7 edge in January. Sammobile picked up a post on Weibo that hinted that Samsung might be ending the Galaxy S7 Nougat beta program soon. Today is the last day for this beta testing process as a Weibo post suggested that members of the Galaxy Beta program received a notification that confirmed the program was to end on December 30 at 24:00.

"We would do our best to distribute the official version in January as soon as possible."

Since the company will not release any more beta updates after today and won't be receiving any feedback, it is expected that it is finally ready to deliver the public version of Android 7.1.1 for Galaxy S7 and S7 edge. The user posts also revealed that the notification included that the company will not provide any individual feedback related to “Error report” and “Suggestion” in the app. However, Samsung will continue to monitor “community.”

While Samsung had confirmed a direct upgrade to Android 7.1.1 for Galaxy S7 and S7 edge users, it should be noted that the beta program was still testing Android 7.0 Nougat. Whether the Korean tech giant will deliver Android 7.1.1 or stick to Android 7.0, nothing was mentioned in today's notification to beta users. In any case, early January will hopefully bring at least some version of Nougat to Galaxy users. 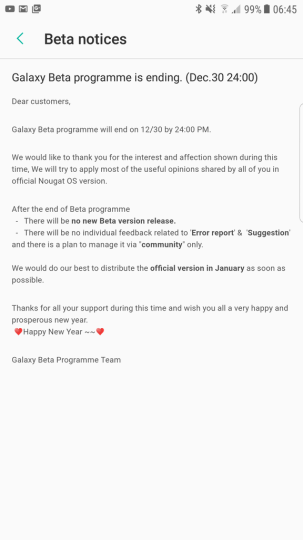