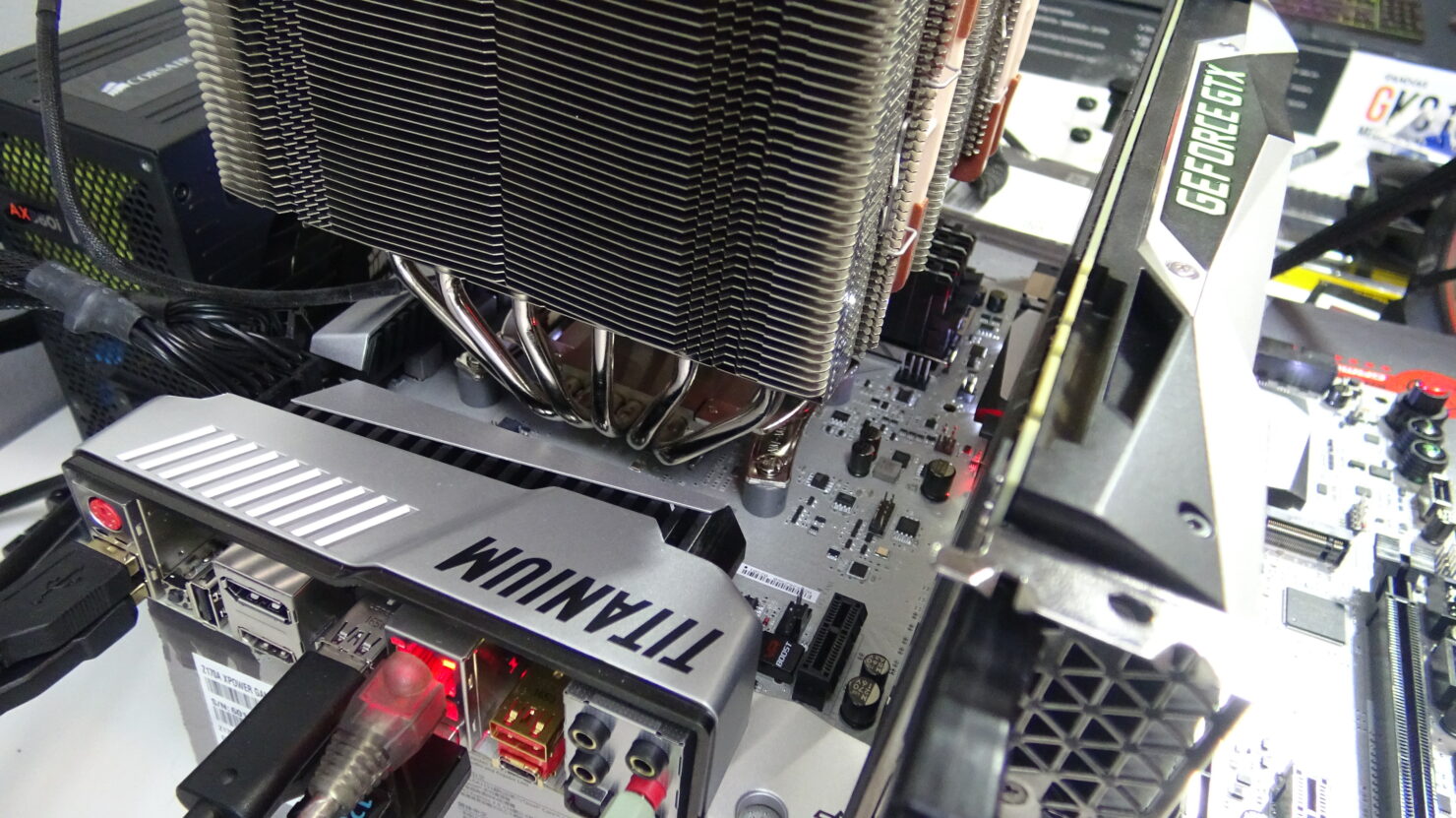 "Wait for Zen" or later "Wait for Ryzen" has been the mantra of the AMD CPU fan for years.  Even though Intel routinely pushed out newly updated CPUs with PCIe Gen 3.0, USB 3.1, and NVMe AMD fans stood firm.  Content that AMD would deliver on a truly next gen CPU that will have been more than worth the wait.  Quite some time back Dr. Lisa Su made it clear that Ryzen, then Zen, would be coming to the high end desktop first and then on to the server market.  A big 'Thank You' if you will to their loyal fans.  Well steadfast AMD fans, was it worth the wait?

As the title implies this isn't a full-on review. Having gotten our Ryzen 7 1800x and motherboard post NDA lifting, we didn't have time to perform a full blown review and are now focusing on several micro-reviews if you will and this is the first of these.  If you want to see a full breakdown and deep dive of the CPU our Khalid has you completely covered here. If it's chipset features you're in search of, then Hassan has you covered here.  The focus here today is for those die hard AMD fans who have held on to their aging FX 8350s to see what a move to Ryzen with the Ryzen 7 1800x could mean for them in terms of production performance as well as gaming.  If you're wanting to see where Ryzen stands at this time against other CPUs from Intel check out our Gaming Benchmark Roundup for a broader look at performance.

For DX11 and OpenGL we utilized FRAPS for capturing performance during our runs. For our DX12 testing I wanted to take a moment and thank the guys at CustomPCReview again for helping develop a tool that will now allow us to deliver the same level of results for DX12 and Vulkan as we have with DX11. DX12 tests were conducted with OCAT and once the runs are all completed three times the averages for average FPS, 1% low, and .1% low are taken and plotted. We use 1% and .1% lows rather than absolute minimum as the absolute minimum typically represents an outlier frame and doesn’t typically represent actual gameplay. Starting off with the Ryzen system, we're working with the components sent out to us by AMD which mainly comprises the Ryzen 1800x and the MSI X370 XPower Titanium. We are using our own kit of Corsair Vengeance LPX DDR4 2400 as the one they sent out simply wouldn't run at the DDR4 3000 that it was rated at. 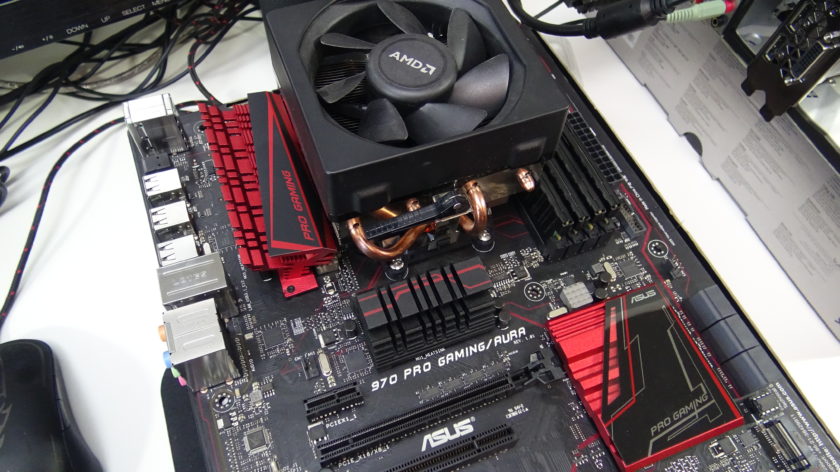 While our FX system may not be running on the top end 990FX chipset, I would personally put the 970 Pro Gaming up against some of the best 990FX board, save for the Crosshair.  But since all of these results are with both CPUs being at their stock frequencies overclocking capabilities aren't really a factor here.

In order to show the biggest delta between the two CPUs we went for the fastest graphics card in our stable which happens to be the GeForce GTX 1080 Founders Edition. We used the latest at the time of testing driver stack GeForce 378.66 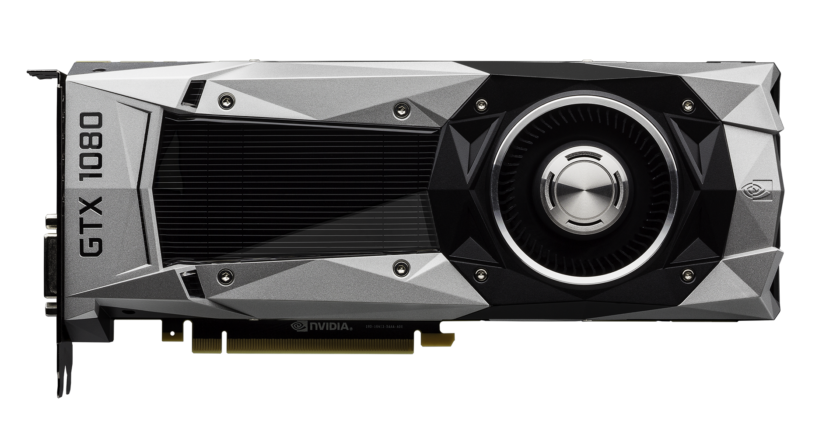 The CPU test for 3DMark Time Spy can bring the strongest CPUs to their knees and seeing a greater than 2x performance increase is nice here. 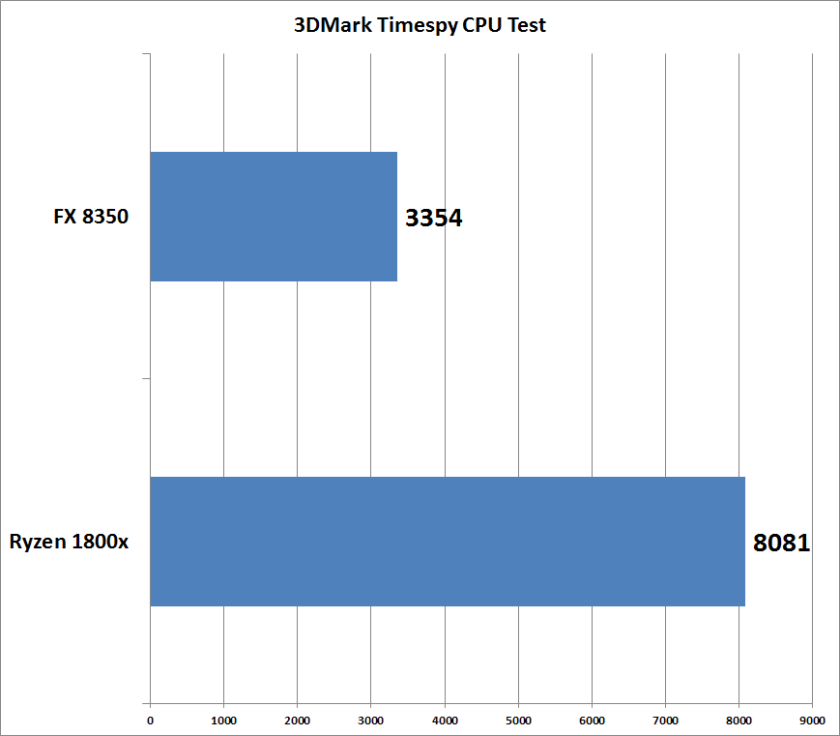 SuperPI has been no friend of AMD's CPUs in the past, but things are looking much better this go around. A 19.6 second reduction in time for 1 million is great and wait until you see what a little overclock can do for it in our next article. 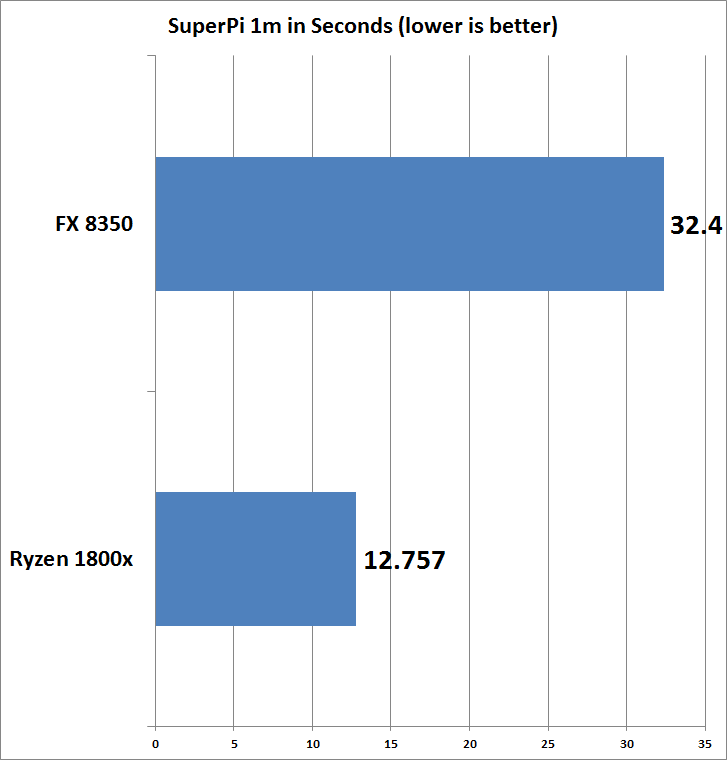 If there was ever a CPU test that could speak for itself, it's Cinebench. I'll just leave these numbers right here for you. We went for Geekbench 4 in favor of 3 just because it's newer. So this one was run on the CPU test using 64-bit instructions. 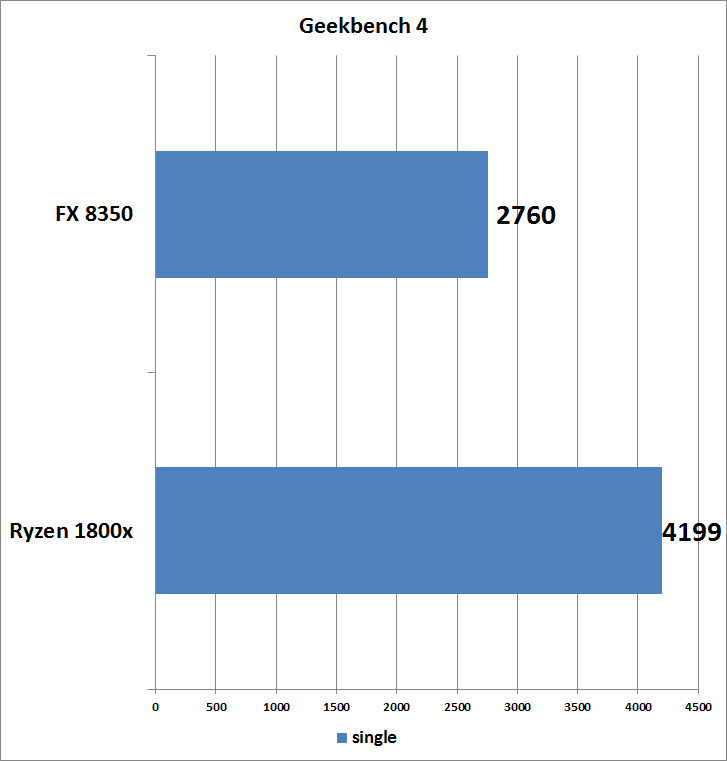 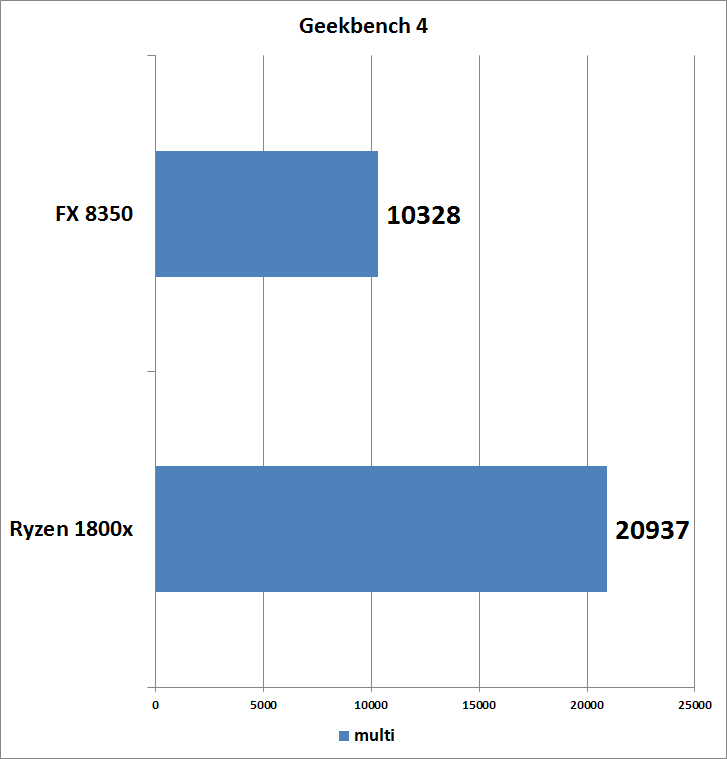 Handbrake is one thing, but we prefer to see what happens when we move on to x265 encoding using the HWBot benchmark at 1080p and 4K using the 'high priority' setting. 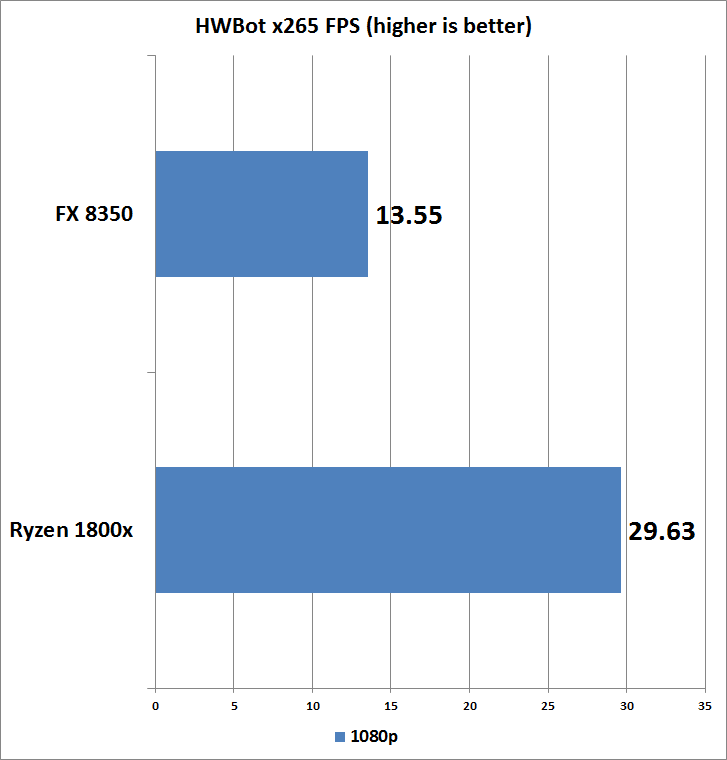 We used the famous Ryzen demo for our Blender test, the same one that is publicly available to everyone and made sure the Render Samples were set at 150. This test really puts things in perspective with the processing power leap they made over previous architectures. We took our power draw readings while running the Blender Test to try pin down full CPU load power draw numbers. This result is impressive when you look at the performance uptick over the older architecture while reduced power draw is being seen. 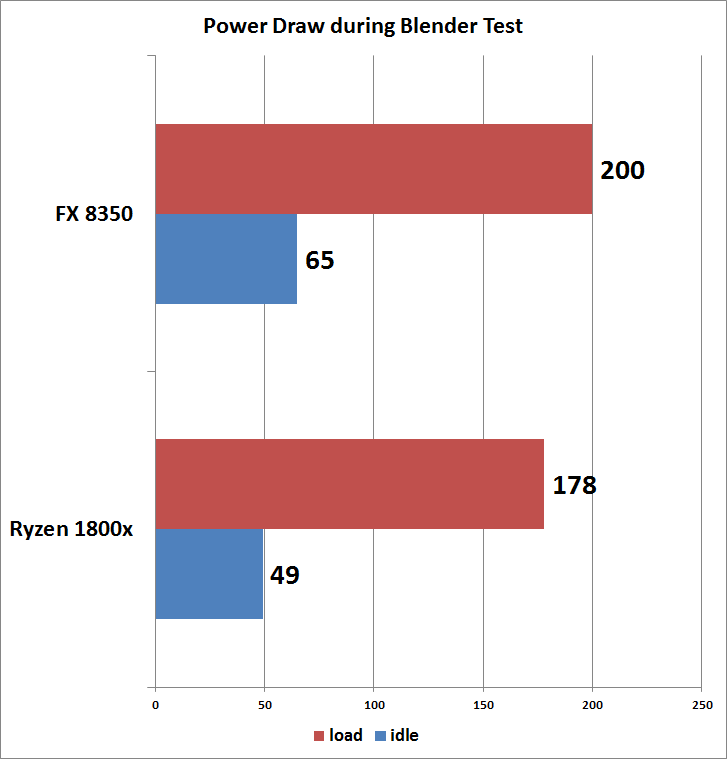 Ashes of the Singularity was tested at 1080p using the High preset under the CPU focused benchmark. 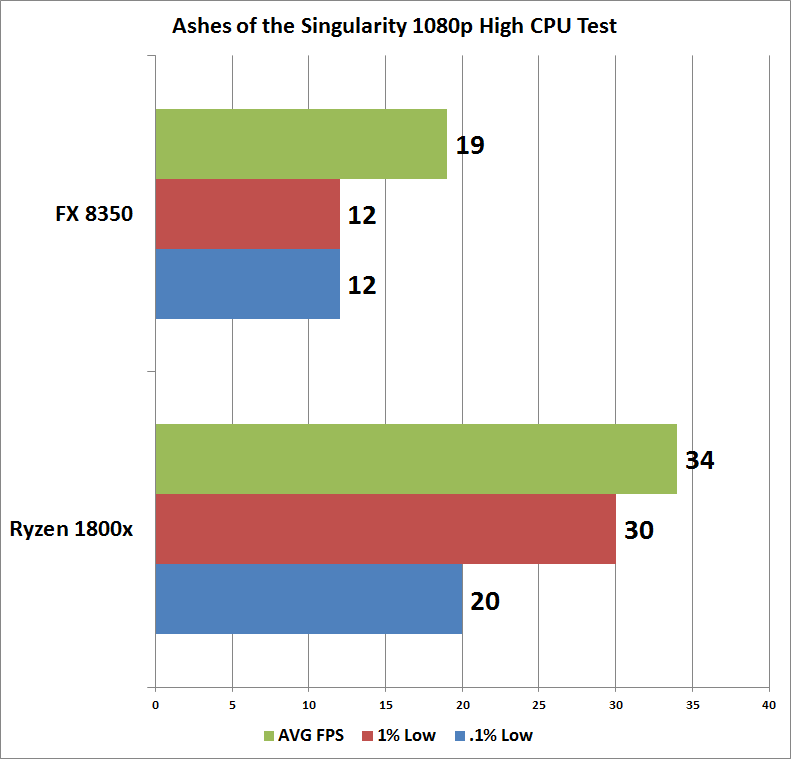 DOOM with Vulkan actually makes a compelling argument for the longevity and standing of the FX 8350 when paired with an ultra low level API like Vulkan. This game was tested at 1080p with Ultra preset and 8x TSSAA to make sure Asynchronous Compute was active. 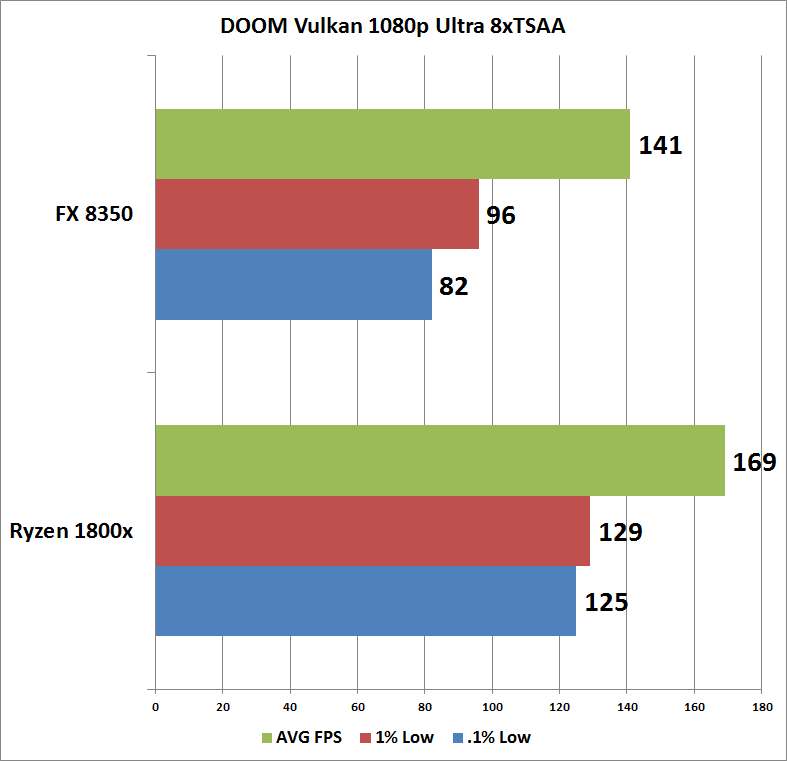 DXMD was tested using the in-game benchmark at 1080p High preset under DX12. 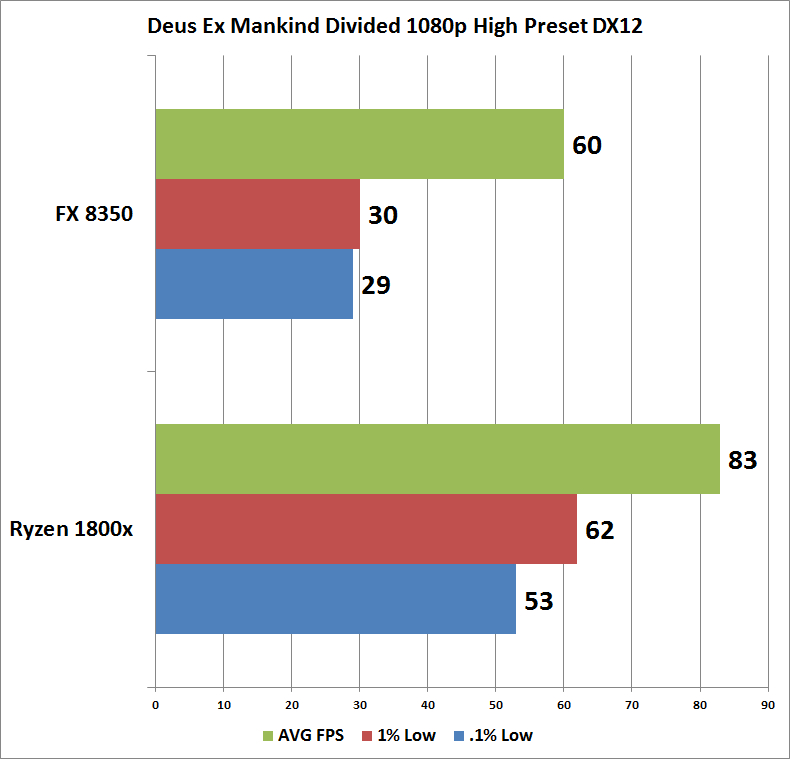 DiRT Rally shows where the improvement in IPC really helps with games that aren't running DX12 or Vulkan. Nearly a 2x performance gain is nothing to scoff at. 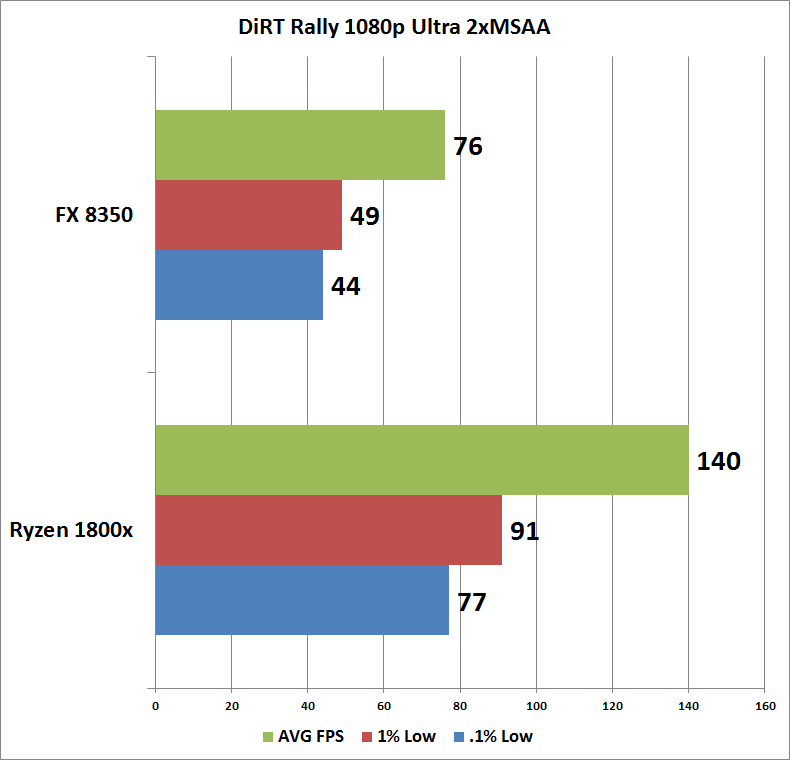 While TW:Warhammer is running under DX12 it still doesn't really scale that far with cores and is still reliant on single core performance. This increase in performance is clearly seen and certainly welcome. 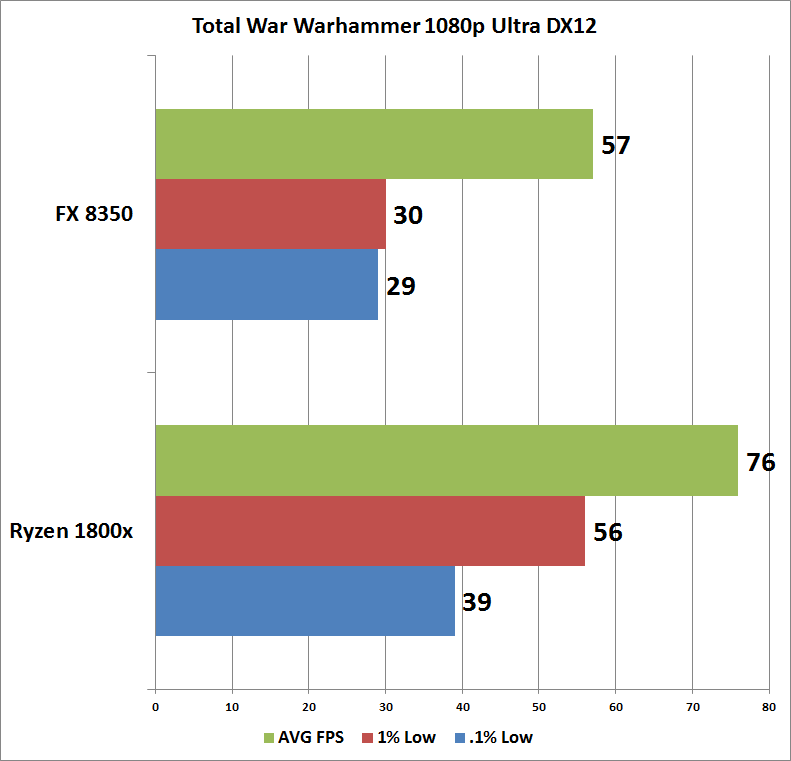 Watch Dogs 2 loves cores and IPC, and this game shows that. It's a tough game to run on nearly any system and I can promise there's still performance to be had but the uplift is very good here. A long way and time have things come since the introduction of the FX 8350 and it shows. The Ryzen 7 1800x is far from an inexpensive chip bringing itself to the market at $499, but if the eight cores and sixteen threads is what you're after, they can be had for as low at $329 in the form of the Ryzen 7 1700, which is my personal pick of the bunch. But it is clear that a lot has come with Ryzen, a solid performing workhorse that has brought some arguable benefits to the gaming scene. Was the wait worth it? Sure, if you've got the money and the need. But me personally, I'm suggesting that those looking to build a sweet Ryzen gaming rig hang tight while the early bugs and issues are getting ironed out for now. I have a feeling that the Ryzen 5 1600x (6-core/12-thread) and Ryzen 5 1500x (4-core/8-thread) are going to be the real winners in this lineup as we're likely to see similar gaming performance for a whole lot less money. But so far Ryzen is performing on all cylinders right where I had personally anticipated. Now, if they could just get the memory speeds up.