AMD has been able to meet Ryzen demand head on with its Ryzen processors but AM4 motherboards are facing a severe shortage. Picture credits: Hermitage Akihabara

AMD has launched its highly anticipated Ryzen processors with a partial lineup and while they are facing some hiccups in gaming performance, the value proposition of these chips remain as strong as ever. Enthusiasts around the world, however, will have to wait a bit as it would seem that while AMD had correctly anticipated the high demand, Add-In-Board partners weren't able to provide a big enough initial production volume to meet initial demand. 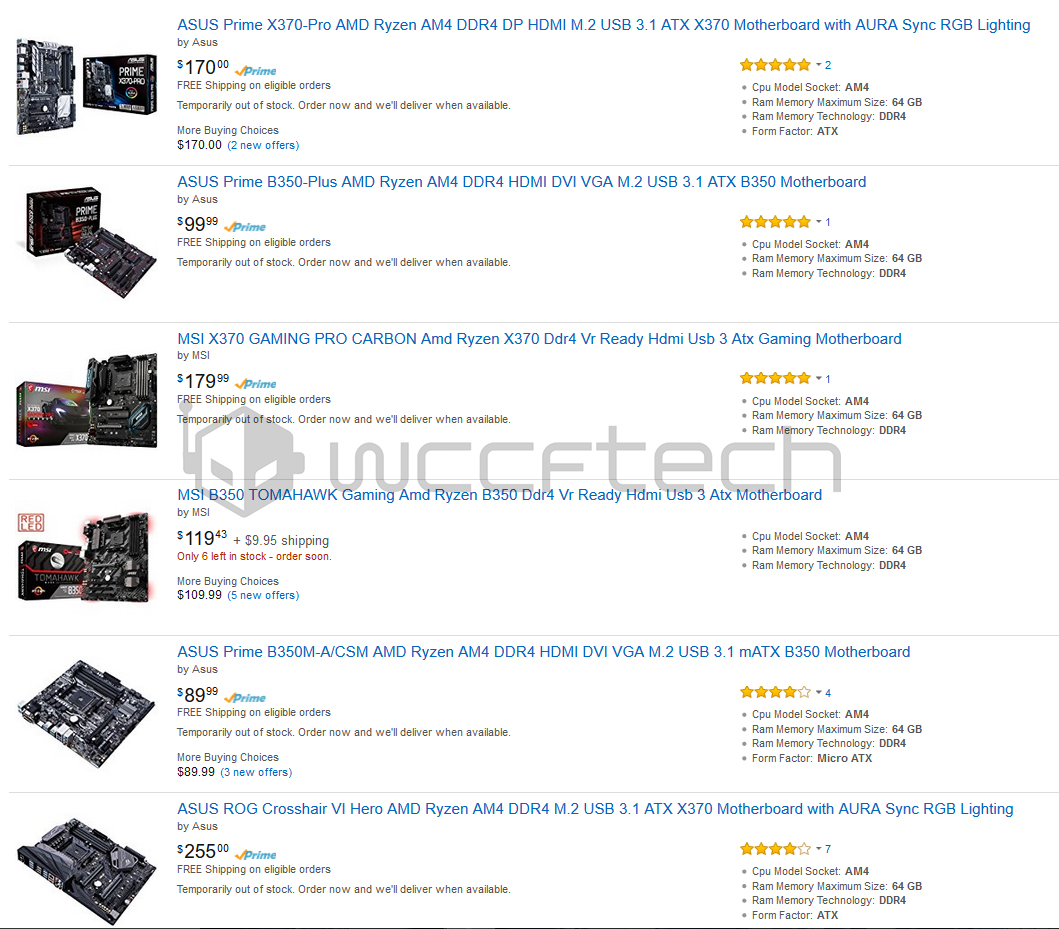 Amazon is all out of AM4 motherboards for Ryzen CPUs.

At the time of writing this report, Ryzen sales are being severely bottlenecked by an almost complete blackout of AM4 motherboards. AMD AM4 motherboards are produced by Add-in-Board partners and not only did they err on the side of caution and underestimate demand, there are reports of problematic BIOSes plaguing the early samples.

Our channel checks revealed that the while the supply has been hit in the US mainland as well, the problem is much more severe globally where you would be hard pressed to find a single AM4 motherboard to go along with your Ryzen purchase. In fact, we have been receiving reports of retailers and shop owners who have shelves full of Ryzen SKUs but no compatible AM4 motherboard to sell with them. Since there is no point in buying a Ryzen CPU without an AM4 motherboard (obviously), this is something that could hurt Ryzen's initial sales numbers and understate documented demand.

A quick look over at Amazon revealed that almost every AM4 motherboard was out of stock (at the time of writing), same goes for other e-tailers. Newegg does appear to have some in stock, so if you want to get your hands on an AM4 motherboard before the supply temporarily vanishes, now would be the time to do it.

One of the only few AM4 motherboards available on Amazon (and even that, in a very limited quantity) is the MSI B350 TOMAHAWK Gaming ATX AM4 Motherboard

which is somewhat of a lemon and not a recommended buy for enthusiasts considering it does not allow multi-GPU and has lower chipset specifications (lower USB 3.0 ports etc) than the X370 rated motherboards - it does, however, have overclocking support for Ryzen processors.

Initial evidence so far suggests that AMD is having a field day with the partial lineup of Ryzen processors it has already released (namely the 1800x, 1700x and 1700) and the primary issue with achieving the full potential in terms of sales is the availability of its (AIB produced) AM4 motherboards.

We already know that AMD has heavily fortified itself against an unprecedented level of demand and finally AIBs will be following suit. While the initial lineup consisted primarily of enthusiast CPUs, our in-house anecdotal survey suggests the real success story of AMD's Ryzen lineup will be the R5 1600X and 1500x  CPUs and if the demand of the enthusiast sector is anything to go by, the mainstream segment should break all records - and the AIB partners better be prepared for it.