An alleged picture and specifications of AMD's upcoming flagship Radeon HD 8970 graphics card have been leaked by 4Chan. Not the best place for rumors it might be so do take this report with a grain of salt. AMD's Radeon HD 8000 series could possibly be showcased at E3 2013 as revealed earlier.

NOTE: This news is a rumor and should be taken with a grain of salt. Although the picture shows no traces of photoshop but it could be a fake and not related to AMD's upcoming announcements or the hd 8970 at all. 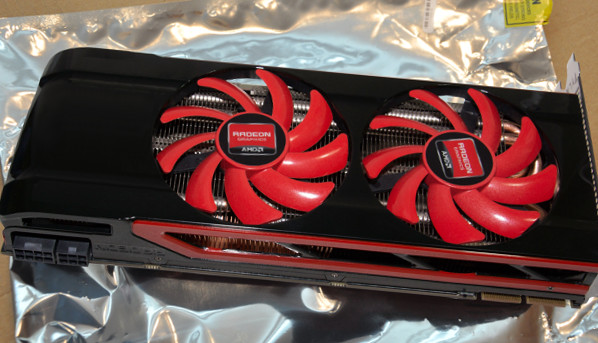 In addition to the picture, the site has also leaked alleged specifications of the Radeon HD 8970 GPU. According to them, the GPU is powered by the 28nm Curacao XT core which features 2304 stream processors, 48 Raster operators and a 3 GB GDDR5 memory running along a 384-bit wide interface. The core operates at 1000 MHz or 1 GHz clock speed while the memory is configured at 6500 MHz or 6.5 GHz effective frequency. The TDP of the card is a bit higher than the Radeon HD 7970 at 250W compared to 210W. This could be due to the addition of much higher number of transistors and stream processors in the latest flagship Radeon HD 8970 core. The card is rumored to be priced at $550 which is $100 under the NVIDIA's flagship GeForce GTX 780 core. So whether or not it could defeat the green team's flagship GPU is only a question that would settled when the card is launched.

The picture itself is quiet surprising, the card may look shorter than its predecessor HD 7970 but infact is around the same length and has a design scheme similar to the Radeon HD 7990. The side pattern and the fans are the same ones used on the Radeon HD 7990 so it could be a cut down version of the cooler we saw on AMD's dual chip mammoth. AMD was recently talking about featuring better coolers on their next-generation cards and you may remember how they showcased in the HD 7990 slides that it delivers amazing performance without breaking the sound barrier? This might be it, AMD preparing reference solutions that are quiet yet deliver superior cooling performance compared to blower fans. There are two CrossFireX goldfingers which allow upto 4 Way GPU compatibility and power is provided through an 8 Pin + 6 Pin connector scheme. If the picture is true and the cards are indeed coming out on E3, then we guess we should wait some more for official details to pop out.