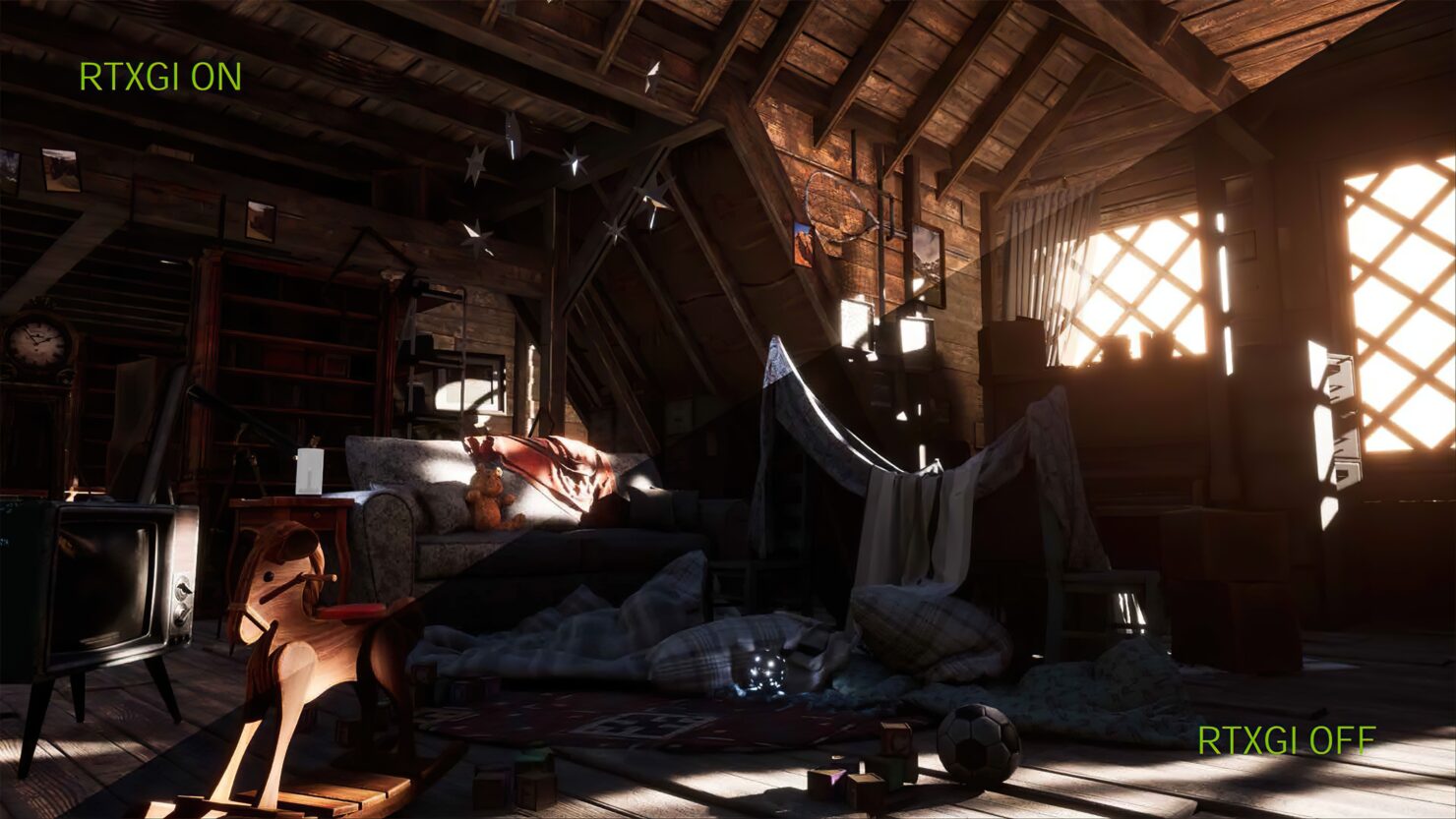 Now, NVIDIA has updated it to version 1.1. As you would expect, that means a slew of improvements and additions which you can find more on below.

Regularly spaced probe grids are not able to handle every scene without (at least) minor visual artifacts and inefficiencies. To mitigate this problem, the RTXGI SDK includes a feature that moves (or relocates) the world-space position of probes to improve their effectiveness and eliminate situations that cause visual problems. This feature was released in beta form in the previous release, and is now leaving beta as a finalized feature. The effectiveness and stability of the relocation behavior have been improved and are now production ready.

By default, all probes in a volume cast new rays, update their stored values, and can be used to compute global illumination. Probe classification identifies and disables probes that don’t contribute meaningfully to the final result, saving computation and improving performance. This feature was released in beta form in the previous release, and is now leaving beta as a finalized feature. The way probes are classified has been improved, is easier to use, and can produce more effective optimizations.

When using RTXGI volumes in game scenes, there are situations where multiple volumes are needed. These volumes may overlap. For these situations, the SDK now provides a scheme and example of how to weigh and blend the contributions of multiple volumes for a space in the game world.

A common use case of RTXGI is to attach and center a single volume to a player or camera, and then update the volume as the player moves. This effectively provides an “infinite” volume of global illumination for the player without needing large amounts of memory to store an infinite number of probes. In practice though, simply moving the volume at the same rate as the player causes visual artifacts. With the new infinite scrolling volumes feature, the majority of the volume’s probes remain stationary, and only probes on the edges of the volume are shifted during player movement. By minimizing the amount of change to probes, this feature creates more stable lighting results when moving a volume.

Perhaps more exciting is however the integration with the Unreal Engine 4 through the official RTXGI UE4 plugin. So far, only Metro Exodus supports ray-traced Global Illumination, while Epic is going to add it (alongside other ray-traced effects) to Fortnite soon. This tighter integration into one of the most popular game development engines should definitely open up to more widespread support in future games.

To celebrate the new release, NVIDIA's RTX Technology Evangelist Richard Cowgill appeared a couple of days ago on the official Inside Unreal live stream to talk about RTXGI (including the future possibilities for ray-traced caustics) as well as DLSS, which is also included in the RTX-Dev Unreal Engine 4 branch. Should you be interested in trying that, you'll find how to request access on this page.