ROG Unveils Their 300Hz Display On Their Current Gen Laptops

ROG is raising the refresh rate to 300Hz represents a 25% increase over the current standard for high-level esports tournaments. At that speed, the screen can draw 5X more frames than the 60Hz panels found on conventional laptops. When your GPU produces enough frames per second to keep up, the faster display makes gameplay silkier than ever before. Higher frequencies can also improve the experience when the refresh rate is fixed and your FPS drops below the maximum.

No Need To Cap Frames With 300Hz

The delay between refresh cycles is shorter, allowing the display to respond faster to fresh frames produced by the GPU. If you’re running Vsync to eliminate visual tearing, the higher frequency mitigates visible stuttering that can occur when the display is forced to wait until the next cycle to show a new frame. At 300Hz, it’s ready to draw a completely new frame every 3.3ms, which nicely matches the 3ms response time of the pixels.

Our IFA panel demos showcase the same technology in multiple segments and sizes. Every frame matters for esports professionals and other competitive players, so we mounted 300Hz displays into 15” and 17” flavors of the Strix SCAR III. These mid-sized machines drive the panels with powerful NVIDIA GeForce RTX 2070 GPUs bolstered by ROG Boost.

The cooling system is so effective that we can achieve higher performance by pushing the GPU up to 1540MHz at 115W in Turbo mode, which is technically factory overclocked. While the Strix series puts high refresh rates in their element, our ultra-slim Zephyrus family brings the same technology to premium gaming laptops that blur the line between work and play. We’re showing the same 300Hz panels inside modified versions of the 15” Zephyrus S GX502 and 17” Zephyrus S GX701. 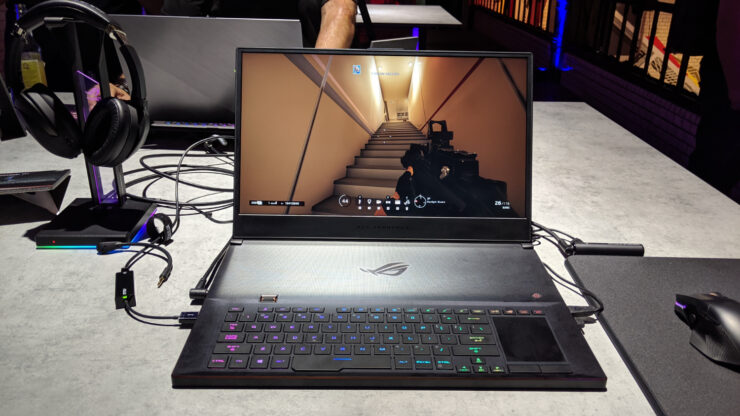 Both models normally balance priorities with the ROG-exclusive GPU Switch, which can shift between G-Sync mode for smoother gaming and Optimus mode for longer battery life. The displays on production Zephyrus S laptops are also factory calibrated to meet Pantone Validation requirements, giving creators the color accuracy they need for work without sacrificing the speed they want for gaming. Cooling ultra-slim laptops are extremely challenging, so our Active Aerodynamic System opens a hidden vent when you lift the lid, allowing more cool air into the system.

The improved airflow enables exceptional performance that helps take advantage of the ultra-high refresh rate. Despite squeezing into a much thinner and lighter chassis, the Zephyrus S GX502 features a GeForce RTX 2070 GPU with the same ROG Boost clocks and wattage as the Strix. The Zephyrus S GX701 takes performance to the next level with a GeForce RTX 2080 GPU clocked up to 1230MHz at 100W in Turbo mode, surpassing the specs of similarly slim systems.

The 300Hz ROG gaming laptops on display at IFA focus on higher refresh rates, but that’s just one part of our broader panel leadership. At Computex, we demonstrated a tantalizing combination of resolution and speed with a 4K laptop display running at 120Hz. While that panel is destined for future devices, the groundbreaking ROG Mothership is available with a wide-gamut 4K display that covers the full Adobe RGB color gamut.

We also offer versions of the Zephyrus S GX531 and GX701 that are the first gaming laptops with HDR. These models combine high refresh rates with VESA DisplayHDR 400 certification. Their high-dynamic-range panels can produce over a billion colors, and they use local backlight dimming to deliver impressively deep contrast. This display hardware is so close to the bleeding edge that software support is somewhat complicated by the lack of a common API for HDR, an unavoidable consequence of being so far ahead of the game.

Whether you’re a hardcore player who wants to be on the leading edge of performance or a power user who wants to go beyond gaming, ROG has a diverse array of display options to suit a wide range of needs. They will release in Q3 of 2019 with no immediate pricing announced.