Scheduled to release worldwide on the 2nd of June 2015, Batman: Arkham Knight is a largely awaited finale to the Arkham series. Its prequel Batman: Arkham Origins was released back in 2013 with mixed user reviews but with some major improvements expected in this release, Rocksteady Studios intend to surprise the gaming market. And in that essence, Rocksteady studios held an AMA(Ask me anything) on Reddit in which they revealed new information about the gameplay and story. 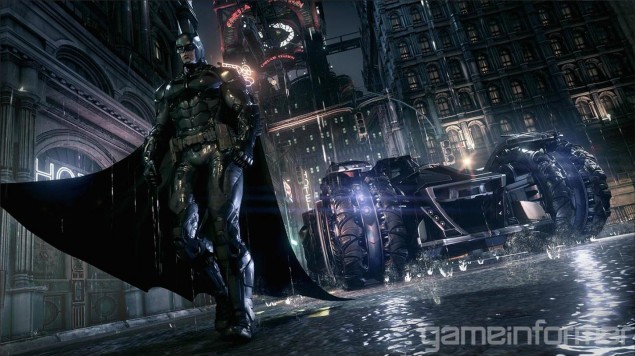 The Game Continues from Jokers Death

The story starts of with its prequel on jokers death where they build up the suspense with the story. After explaining how the story was marked out because of the prequels ending, they said that"With Batman: Arkham Knight, that ending is the point that we jump off from, asking 'what happens when Joker is removed from Gotham?' and looking at the fallout from those events."

Dealing with the mechanics of the game, rock steady studios also renewed the bat-suit and gave a bit more metallic look to it."We wanted to highlight the interaction between Batman and the Bat-mobile - you'll see that the suit mirrors the design of the car in a lot of ways. The new suit impacts gameplay as well, as it enhances some of Batman's abilities, particularly in the way the Batman and the car work together."
Further Commenting on the melee combat mechanics, they added "They’re fast, and they can dodge and counter you – in the most recent builds they’ll dodge you without making you drop your combo, so it’s easy to get caught out the first few times.”

Moving onto the gameplay, Rocksteady commented on it by complementing the animation team and describing a scene "There's a scene toward the end of the Ace Chemicals Infiltration Part 1 Trailer where Batman faces off against two combat experts. Everything in that shot is taken straight from the game - we just shifted the camera to get a slightly more cinematic angle."

The City is the base of the game and Rocksteady said that it was one of the core features of the game “Now that we've got all of Gotham to explore it’s a great experience. The City design team here has done an amazing job building an environment that’s huge and intricately detailed. The detail in Arkham games was always my favorite thing about playing them before I joined Rocksteady, and it’s awesome that the guys have managed to keep that level of care on something so much bigger.”

Finally, Rocksteady Studios also commented on the downloadable content of the game "Both the Harley Quinn and Red Hood DLC that we've already announced are story missions! You get Harley's story by pre-ordering; Red Hood is a retailer exclusive depending on where you live (Gamestop in the USA, other regions still TBD). "

Furthermore a new game trailer is to be released coming Monday 9 A.M. PST.