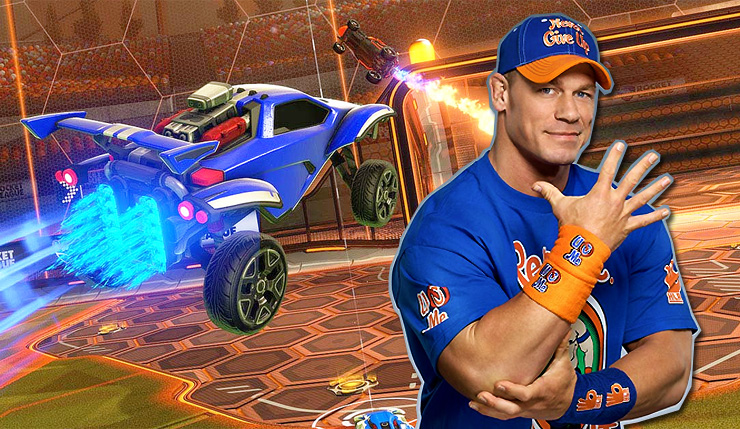 If you’re one of those strange folks who follows pro wrestling and WWE (you can admit it – I’m with you) then you’re no-doubt very used to seeing the Rocket League logo. The popular car soccer game is one of WWE’s biggest sponsors, and now that partnership is being taken to a new level. Rocket League publisher Psyonix has announced that a variety of WWE-themed customization items are coming to the game, likely in time for WrestleMania!

“WWE and Rocket League are teaming up for one of the greatest partnership teams in Soccar history! Throughout 2018, you can expect to see Rocket League all over the WWE universe, from regular appearances on UpUpDownDown, WWE’s YouTube gaming channel with Austin Creed a.k.a. WWE Superstar Xavier Woods to sponsorships at live WWE events (you may have even seen us on Elimination Chamber this past weekend!) We’re also very excited to be a partner of WrestleMania 34!

Along with regular appearances at WWE events, we will also bring WWE into Rocket League later this year! We’ll have more info regarding what in-game customization items we'll be offering in April, but we believe WWE fans will be happy all year long.”

We don’t have a specific release date for the WWE Rocket League goodies yet, but you can bet Psyonix is aiming to get something out in time for WrestleMania on April 8. We also don’t know what items we’re getting, but we can wildly speculate. A Hell in a Cell-themed arena? A Roman Reigns car that just effortlessly rockets through all opponents? The old Stone Cold monster truck? Maybe those are unrealistic -- it’s just going to be 100 multicolored John Cena decals, isn’t it?