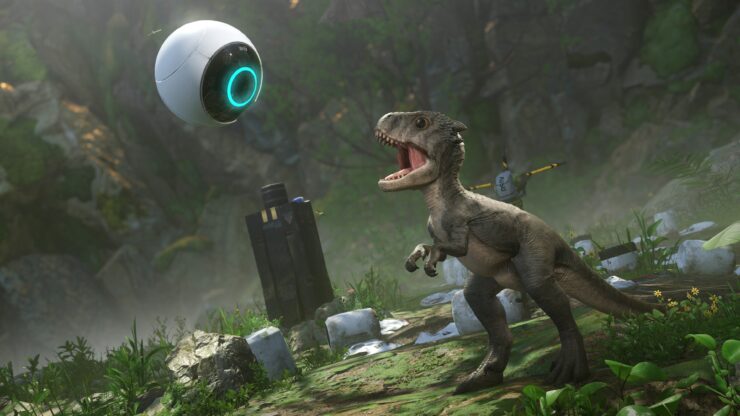 Crytek announced today that their Sci-Fi VR adventure, Robinson: The Journey, will be coming to the Oculus Rift for PC in January. The Journey has you play as Robin, a boy stranded on a strange planet, who needs to survive a harsh and dangerous world with the help of his AI unit HIGS and a baby T-Rex. Robin will look for survivors and unravel the mystery of the extrasolar planet he's stuck on.

Tom Deerberg, Lead 3D Artist for Robinson, explained in a blog post why VR works so well for this type of game:

Today, VR represents the next logical step in the evolution of immersive game worlds. Just as the jump from 2D to 3D once gave players a more authentic impression of being “in the game," VR turns what we're used to experiencing on a flat screen into something much more enveloping. Now, the sense of scale is inherent. You feel physically present in the game space, and those planets hanging on the horizon serve to underscore the vastness of your surroundings like never before. You'll tilt your head to take in the full grandeur of a dinosaur or pull back as you assess the danger of a chasm below – and it all feels boundless in an entirely new way.

Crytek has made news recently when they announced the closure of five of their studios in order to "refocus on Crytek's core strengths". Robinson: The Journey is currently available now on PlayStation VR. We recently reviewed it and our own Kai was very impressed with the game:

From start to finish, Robinson: The Journey helped to redefine the visual fidelity of what these VR headsets can accomplish.Though some control issues keep it from being a perfect experience, Robinson shows just how far the PlayStation VR has come in such a short time and the promise of even higher fidelity with the PS4 Pro can only push the benchmark further. Even if alien planets and dinosaurs aren’t quite your thing, Robin’s tale of survival is the greatest yet on PlayStation VR.