Robinson: The Journey Review – Land of the Lost

Crashing one’s spaceship and evacuating onto an alien planet usually marks the perilous end of one’s journey, not the beginning. In Crytek’s latest first-person adventure, Robinson: The Journey takes place not upon an immediate arrival to a hostile planet but nearly a year into a tale of lone survival. As a young boy named Robin, with the aid of an autonomous flying robot known as  HIGS and a baby Tyrannosaur rescued at birth named Laika, his journey begins with branching out from his little slice of home in search for other humans that might have survived the crash landing upon Tyson-3.

Far from Crytek’s usual offering of guns blazing first person shooters, Robinson: The Journey tones the action down immensely while keeping the first-person perspective for a Playstation VR exclusive. Set on an alien planet that’s inhabited by Jurassic era wildlife and the remnants of a crashed spaceship littering the landscape, the only technology available to Robin is what he’s scavenged for himself over the past year of life alone. Trading a rifle for a multi-tool, Robin’s sole line of defense is also the same tool that can help him learn more about this hostile environment, what tragedies befell the flagship Esmeralda that carried him here, and if there were other survivors like him.

Being represented by little more than a pair of floating hands might take some getting used to in Robinson: The Journey. The brief seven hours spent traveling across Tyson-3 for other survivors is spent with a multi-tool in Robin’s right hand that aids in everything from heavy lifting and scanning objects to unlock their true purpose. Contrary to the likes of The Assembly where the player doesn’t have a physical form, having a representation of hands actually helped to cut down some of the disconnects in VR that frequently lead to motion sickness of sorts. In fact, coupled with the default movement option that rotated Robin’s field of view into so-called pie slices instead of a direct 1:1 movement, I got none of the headaches or uneasiness that other PS VR experiences brought on.

Robin’s multi-tool remains the single (and greatest) tool in his arsenal, offering up a multitude of tasks with a simple press of the R1 button to toggle modes. Through its two modes, Robin can scan various fauna across the alien planet and catalog them for future insight and one of Robinson’s primary collectibles. The other gives Robin a feat of extra strength, allowing him to pick up and utilize various items scattered across the terrain both for defense and traversal. Find an irate pterodactyl that’s keeping you from your next objective? Rip out its nest piece by piece to scare it off. Need to catch a fish? Use an old satellite dish and scoop it right out of a river. 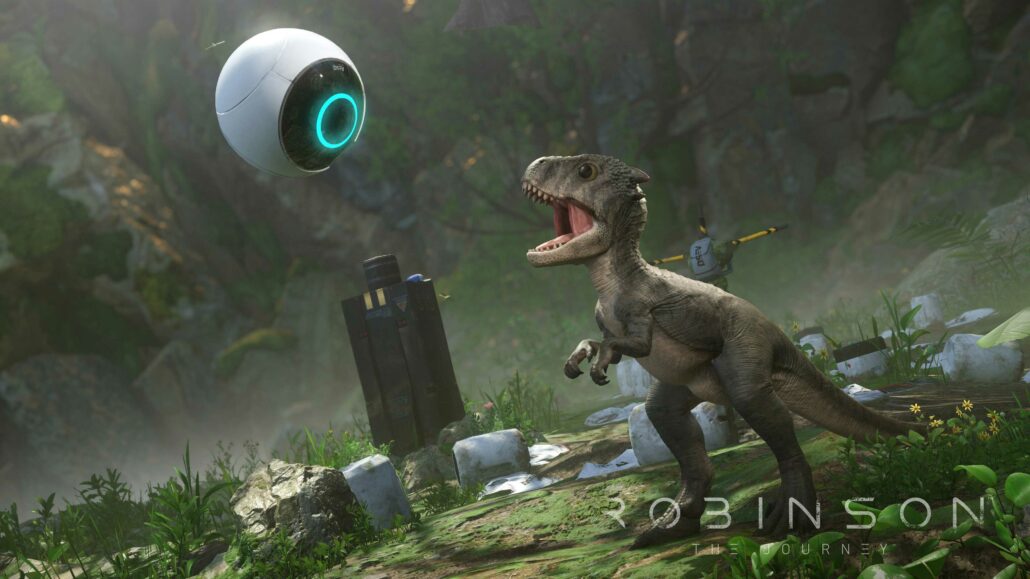 Much of the adventuring puzzles in Robinson utilize that multi-tool in various ways, often to unblock a future path or bridge across treacherous terrain. By using L2/R2 in tandem, Robin can manipulate whatever he’s holding around in light physics puzzles, most notably for creating safe pathways through the environments. Trying to manipulate around and position items right where you need them were the sole rough spot in the controls and caused a fair bit of frustration  when failures were repeated. To be fair, I spent nearly an hour on a single trophy just for trying to throw a paper airplane found tucked away in the farm area and make it fly for a few seconds to little success.

With humans being a scarcer resource than working electricity, Robin’s adventures are often spent with only the accompaniment of his robotic HIGS unit and dinosaur companion for conversation. Any time the player is lost on what to set out to do next, HIGS is usually there with some sort of familial guidance to direct Robin off towards his next objective. While Robinson is a pretty linear journey from point to point, sometimes taking the time to step off the beaten path and go spend time with some of the other dinosaurs roaming the area.

To date, no other Playstation VR experience comes close to matching the pure fidelity and graphical awe of Crytek’s Robinson: The Journey. In an early phase of the hardware where so many games are muddled with jagged edges and lower image quality, this young boy’s journey stands apart. Each of Tyson-3’s various locales, from decrepit tar pits to a robust jungle teeming with deadly flora and fauna, feel distinctly separate from another enough yet familiar enough to return and navigate around once more via fast travel for the other collectibles and trophies that might’ve been missed (which unlocks after completing Robin’s journey).

Crytek’s sense of grand scale shines through when perched up high in the jungle areas and peering off into the woodlands below, or when traversing across treacherous wires with the ground dozens of feet below. The first time I dared to glance downward while navigating across an outcropping of orange colored fungi, I was immediately instilled with a case of vertigo and lost my grip before plummeting to a quick death (one of many I ran into during this brief journey, all of which I felt like were my own fault). Running around between the legs of thirty-foot-tall ‘Longnecks’ made me ever so fearful of making the wrong move and walking right into their path, leading to another swift demise. There was a pure sense of wonder to seeing these dinosaurs up close in VR and being able to see their sheer scale and might up close.

From start to finish, Robinson: The Journey helped to redefine the visual fidelity of what these VR headsets can accomplish.Though some control issues keep it from being a perfect experience, Robinson shows just how far the PlayStation VR has come in such a short time and the promise of even higher fidelity with the PS4 Pro can only push the benchmark further. Even if alien planets and dinosaurs aren’t quite your thing, Robin’s tale of survival is the greatest yet on PlayStation VR.

Crytek's expertise of crafting visually stunning experiences holds true in Robinson: The Journey. Robin’s tale of survival is the greatest yet on PlayStation VR, even if some control issues keep it from being a perfect experience.