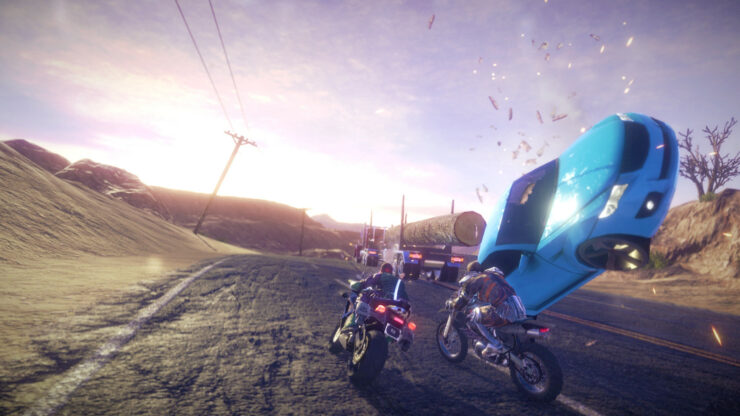 Road Redemption was on course to be launched on Kickstarter in 2014. The campaign of this game was first announced in 2013, with success, debuting on Steam Early Access the next year, but with a very slow development process. Especially knowing that DarkSeas Games wanted to finish it in 2015.

At least now it's official: Road Redemption will arrive in its stable version on Steam (for Linux, Mac, and Windows) on October 4th, leaving behind the Steam's Early Access roughly one year after the original schedule.

And of course, the influence of Road Rash is still noticeable in this game. This is, in fact, the title's greatest attraction, knowing that the saga of EA has been dead for too many years.

As expected, its team, now formed by Pixel Dash Studios and EQ-Games, has just celebrated this occasion with the publication of a new trailer that you can see below.

Get details about this game below.

Lead your motorcycle gang on an epic journey across the country in this brutal driving combat adventure.

Earn money by completing races, assassinations, robberies, and other challenges in your path. As you collect loot, you'll upgrade your character, your bike, and your weapons.

Driving a motorcycle at 100 mph while trying to hit someone with a pipe is dangerous, and death can come quickly. Fortunately, every time you die, all the experience you've collected can be used to upgrade your character, your bike, and your weapons.

In the multiplayer mode, you can work with your friends or let out some road rage on them. It's up to you.

Road Redemption takes place in a post-apocalyptic world, ruled by a brutal dictator. Fans of Mad Max will feel right at home here.

After years of bloody street warfare, the country's biker gangs have settled into an uneasy truce.

This period of peace is interrupted when the leader of the country's richest weapons cartel is assassinated, and a $15,000,000 bounty is put on the mysterious assassin's head.

It's up to you and your fellow gang members to chase down the assassin and claim this prize, but you'll have to drive through unfriendly territory to do so. Every biker in the country wants a piece of that $15,000,000 bounty, and they won't hesitate to take out those who get in their way.