Rise of the Tomb Raider – The PC Experience 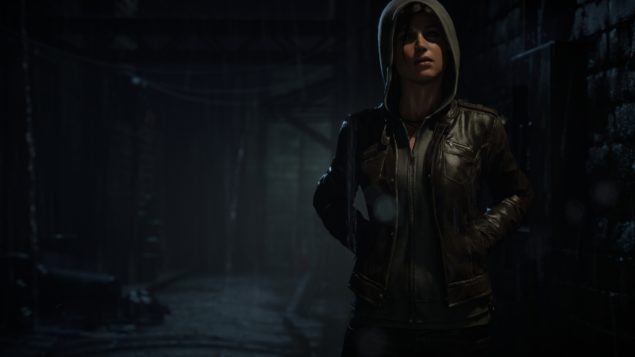 When Rise of the Tomb Raider was announced as an Xbox exclusive, lots of angry PC and PlayStation 4 gamers swarmed the Web with comments and forum posts in protest of this decision by Square Enix.

As it turned out, PC gamers didn't have to wait long at all. Rise of the Tomb Raider released just two months later, likely because Microsoft intended to use the game's strong appeal on Windows; the latest adventure of Lara Croft became the first AAA game to be released on Windows Store.

The good news is that the Steam version of the game (while the Windows Store version is another matter entirely, which I've previously dissected) is for the most part an excellent port of an excellent game. Dutch studio Nixxes worked its magic again, delivering the most beautiful rendition of Rise of the Tomb Raider on PC after the incredible work done with the Xbox 360 version.

But let's take a step back to first analyze the work done by Crystal Dynamics. Understandably, the historic Tomb Raider developer chose to upgrade the Foundation engine already seen in the 2013 reboot as it had a strong base to build upon. Rise of the Tomb Raider is simply brimming with enhancements, though; here's a list.

Perhaps most interesting is the use of Side FX's Houdini software. This tool allowed developers to render offline highly detailed water effects and avalanches that would then be merged into real-time cutscenes, such as the one you can see below. Here's the official blog post explaining the whole process, for those interested.

On top of these additions, the PC version of Rise of the Tomb Raider has further enhancements. Anisotropic filtering is one of the first things that gets reduced on console, for instance, and the Xbox One version of the game made no exception; that's just the tip of the iceberg, though.

NVIDIA's HBAO+ solution has been added to the game, greatly enhancing contact shadows without a huge performance hit; as usual, this can be enabled on AMD hardware too. But there's more: sun soft shadows (which provide more realistic shadows under sunlight) were nowhere to be found on Xbox One; geometry has been increased in the PC version alongside hardware tessellation, and there are higher settings for texture quality, shadow quality, dynamic foliage, level of detail and of course Purehair. 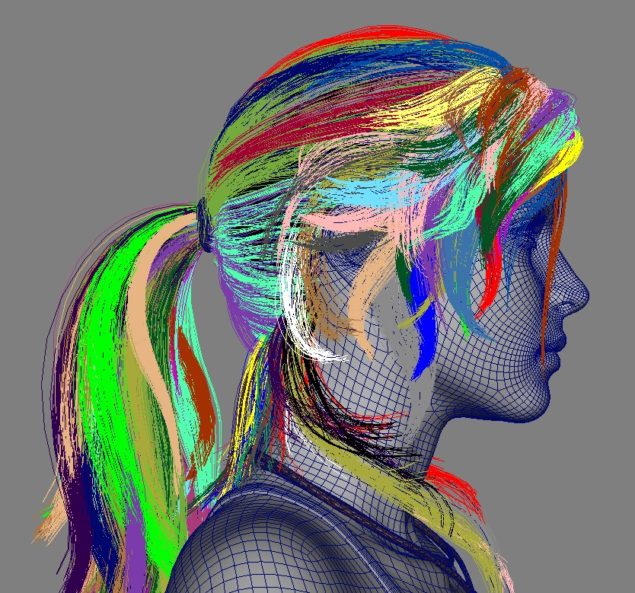 Purehair deserves a thorough explanation. It's the successor to AMD's TressFX technology used in the previous game, customized and optimized by Crystal Dynamics.

With Purehair, Lara Croft's hair is comprised of over 30K strands which are controlled by a series of master strands. The movement of these master strands drives the individual strands, making them react in a natural and physically correct (for the most part) way.

Moreover, her hair is also influenced by the weather and other circumstances in a believable way. During a snowstorm, bits of snow will get into her hair; diving into water makes it wet and heavy (and, in a nice touch, Lara ties the ponytail again once she's emerged), while running will make her ponytail move to the side realistically.

Overall, Rise of the Tomb Raider certainly features the most detailed hair in a videogame yet, though that's limited to Lara. Even the other main characters and animals like bears don't come close, since they are merely comprised of polygonal alpha cards arranged to simulate hair volume; while their hair still looks good, it completely lacks the dynamic movement of Lara's mane. If we'd want to compare Purehair with HairWorks in The Witcher 3, Lara beats Geralt but CD Projekt strikes back with their amazing bear fur. 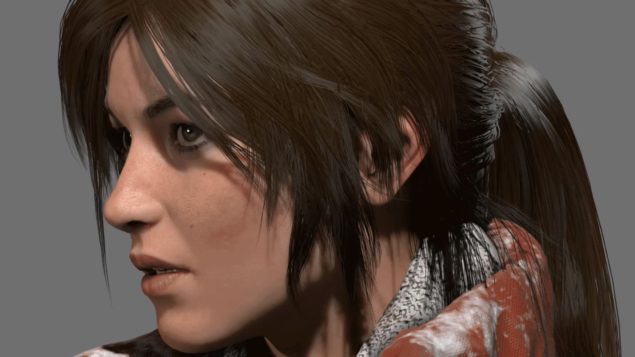 As mentioned earlier, Purehair on PC has an additional very high setting which makes Lara's hair thicker. That's about all it does, so if you're starving for a few more FPS you can easily fall back to the previous setting ("On"). Switching Purehair off will give you back even more performance, but it also completely ruins Lara Croft's hair; if you're in a situation where you find yourself in need of this, it's probably time for an upgrade of your components.

Overall, there's a lot of options to tweak in Rise of the Tomb Raider for PC so that anyone may tailor the game's configuration to his/her liking. That goes for anti-aliasing, with SSAA, FXAA and SMAA all available, and even for post-process effects like Vignette Blur, Bloom, Lens Flare and Film Grain.

Shortly after the release of the game, I've bought a 4K IPS GSYNC display, the Asus PG27AQ. Needless to say, moving from a FullHD TN GSYNC display (the Benq XL2420G) I've witnessed a massive increase in graphics quality; Rise of the Tomb Raider in particular is probably the best 4K game I've played yet, when considering both graphics and performance.

Even if all recent games benefit from running at 4K resolution, some are simply far more impressive. That's because they use higher resolution textures and higher quality effects, which are then highlighted by the incredible definition clarity due to the raw pixel count enjoyed at 3840x2160.

Rise of the Tomb Raider for PC is without a doubt one of the best looking games available right now regardless of your resolution, but those few gamers who can run it at 4K will attest that it can be breathtaking at times, with tons of little details jumping out that much more.

They say that a picture is worth a thousand words, which makes me wonder how many words is a video worth. Regardless, it's the best way to showcase the game's brilliance, though you'll need a 4K display to truly appreciate it.

Of course, trying to run a graphically intensive game like Rise of the Tomb Raider at this resolution and maxed settings comes with certain costs.

The bottom line is that one GPU won't cut it, even a GTX 980Ti or Radeon Fury. With an SLI or CrossFire, things are definitely more manageable.

My configuration packs two Palit GTX 980Ti Super JetStream and it can run the game smoothly for the most part, which is already a feature in itself considered how other games perform at 4K. Of course, there are more intensive areas such as Geothermal Valley where frame drops are noticeable, but the game never became unplayable or anything close to that even with maxed settings (with the exception of AA, useless at 4K, and Specular Reflection Quality left to Normal).

Dropping other settings a little more would have surely improved performance, but I didn't feel the need for it. Having to search for a better SLI profile than the one provided by NVIDIA was disappointing, though it won't be anything new for veteran SLI gamers. Just enter the 0x080002F5 value in NVIDIA Inspector's SLI compatibility bits to get better scaling.

So far, support for the game on PC has been great with several performance updates. This is just the beginning, though, as hints of support for DirectX 12 API were discovered in the files and the developer confirmed during a live stream that it's coming, at least once it's polished enough to deliver a consistently better experience than DirectX 11.

The same goes for NVIDIA's VXAO (Voxel based Ambient Occlusion), hinted at in a few press releases and then disappeared all of a sudden. This, too, will be added to Rise of the Tomb Raider when ready, so we should expect both graphics and performance enhancements in the future.

This isn't a review for the simple reason that we already have one for the Xbox One version, but I still wanted to relay my gameplay impressions. I would have given the game a slightly lower score, but make no mistake, Rise of the Tomb Raider is an amazing action/adventure title.

When comparing it to its predecessor, the increased focus on exploration and tombs in particular is clear. The ability to venture off is critical to avoid that feeling of a linear rollercoaster and Rise of the Tomb Raider excels in this regard. Even if the game doesn't really feature an open world, there are plenty of opportunities to wander off in caves and search for documents, survival caches and more.

Whatever you find will most assuredly be worth the detour. Documents and recordings yield experience (useful to level up and then acquire new skills), caches provide useful materials for upgrades and so forth, but by far the most interesting sections are the optional challenge tombs.

The distinguishing feature of these tombs is that you'll have to solve fairly elaborate (but not too much) puzzles in order to complete them, harkening back the old Tomb Raider games. Upon completion of a tomb puzzle you'll be able to read a book on a pedestal and learn an additional skill; while these skills are by no means necessary to progress in the game, they are surely helpful. It's the right way to implement exploration: making it rewarding, yet not mandatory.

Overall, Rise of the Tomb Raider sports a great balance of adventure, platform and combat elements, with no single element dominating the scene for too long which helps avoiding repetition. The plot itself is enjoyable without being anything truly extraordinary, and the longevity is spot on at 20 hours for an 80% completion (main quest and all tombs, but quite a few documents and caches missing).

For those who own a capable gaming rig and don't hate the action/adventure genre, RIse of the Tomb Raider is a game that would be criminal to miss. Just get it on Steam, at least until they fix the Windows Store environment.