When XCOM: Enemy Unknown released eight years ago, friendship groups were put to the test. Squadmates were transformed from randomised soldiers to real life acquaintances thanks to the detailed character customization system, and recounting the war stories to their namesakes would prove to be surprisingly delightful. That is until you started getting furious at the actual human friend when their soldier missed a 90% shot and got your other friend killed.

The new XCOM: Chimera Squad doesn’t let you do that. Instead, there is a handful of preset characters each with their own appearance, personality, and abilities, that can’t be edited beyond changing their t-shirt colour. But with its tighter focus and new additions to the turn based tactical combat, you won’t even miss watching your friend get killed from across the battlefield.

Chimera Squad is not a departure from the series foundation that was formed with Enemy Unknown, nor is it an evolution like War of Chosen. It is something else, an experimental offshoot from the main games that changes the formula without ever risking the other entries. This is great for fans of the series, as the tweaks made in Chimera Squad radically change the way you’ll play compared to any of the other XCOM games. And on top of that, they’re a lot of fun too. 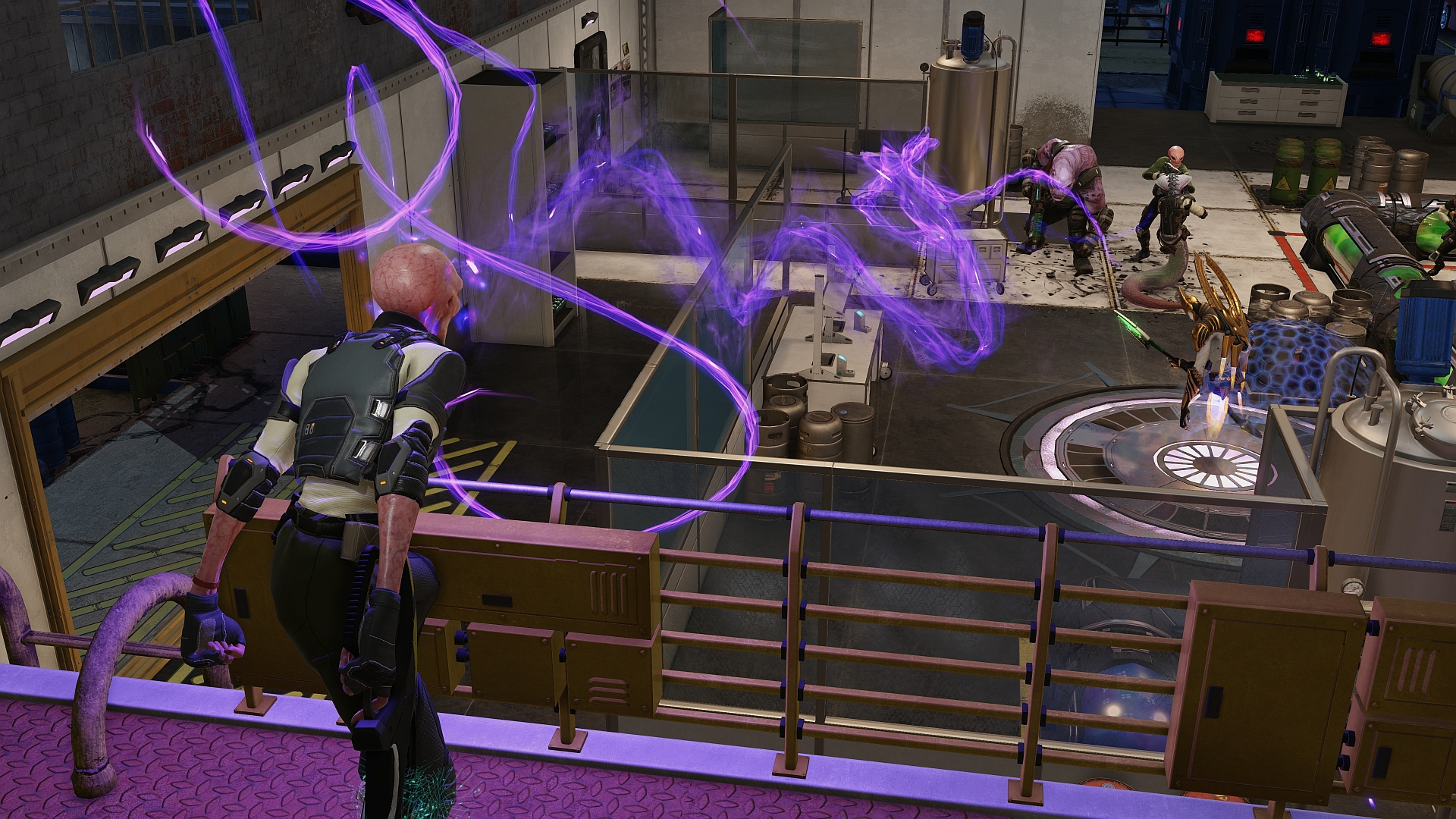 In Chimera Squad, you take on the role of the titular team, created after the events of XCOM 2 (heads up for spoilers on that) as part of the Reclamation Project and is made up of humans and aliens alike. Your squad in principle is there to rid the cities of the dangerous weaponised technology left behind by ADVENT during the liberation. But when City 31 begins to lose a grip on various criminal factions, you’re redirected to take back control.

The over map isn’t the whole world anymore, just a city. But you’ll still be balancing the priorities of its various districts and your squad in order to keep the peace. Instead of panic which countries could succumb to in previous games, the individual neighbourhoods can descend into unrest. Completing missions in districts reduces the revolutionary attitudes of its citizens while ignoring missions increases it. And when each mission has a different reward, you’ll have to decide not only what is best for the city, but what is best for your squad too.

On the face of it, it sounds very similar to previous XCOM games, and you’ll see a lot of other familiarities as you first begin to play as well. Researching equipment allows you to buy it and augment your squad, while promotions unlock new abilities to utilise on the field. But it is the turn-based combat that has had the most drastic shake-up in Chimera Squad. 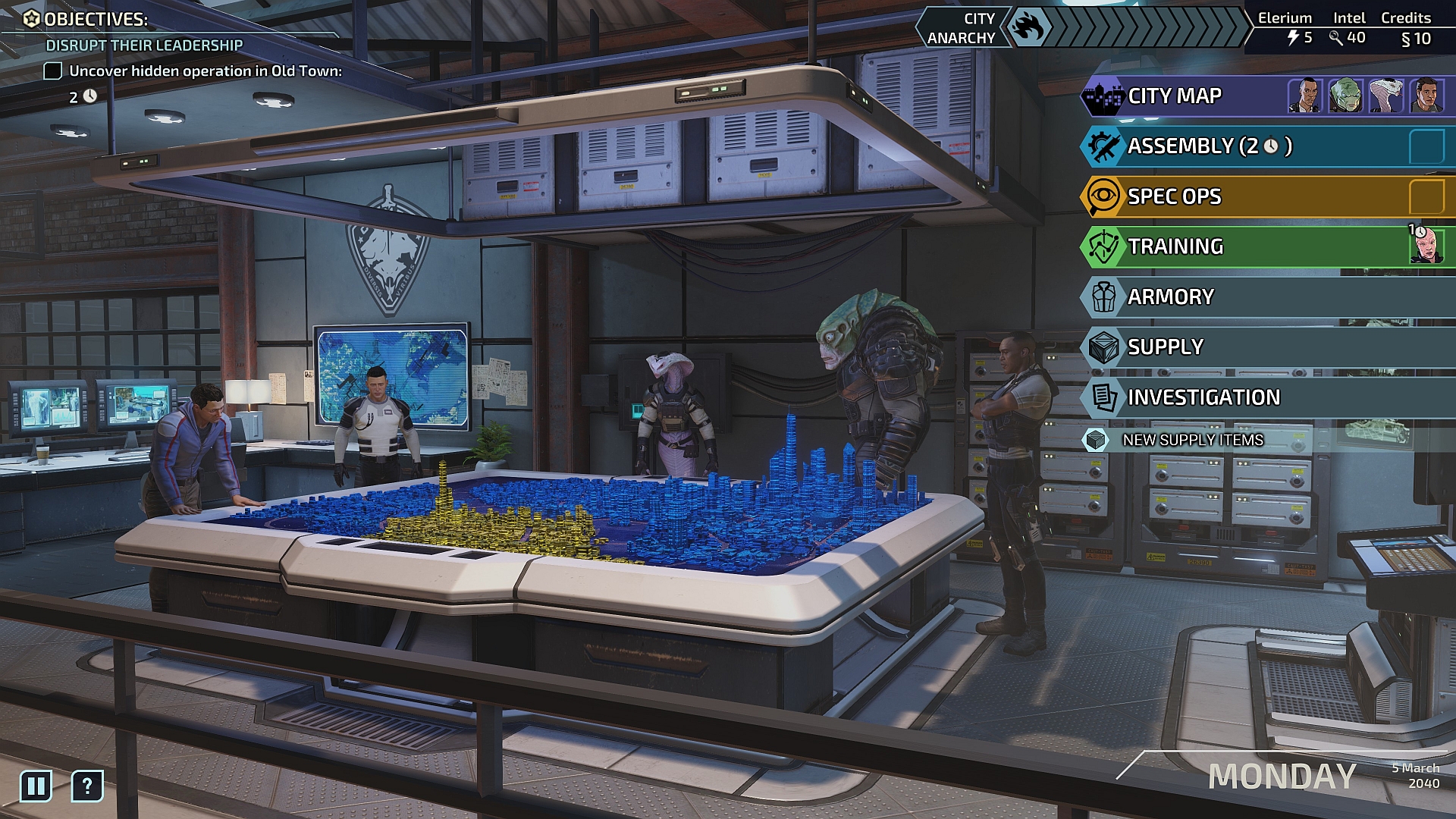 Previous games saw you deploy a squad to mission objective and meticulously move across the map, engaging, flanking, and overwhelming your alien adversaries, or becoming overwhelmed yourself. But in Chimera Squad, the map scale has been shrunken, allowing for a series of incredibly tight, thoughtful encounters. Each mission is made of a series of rooms that must be breached and cleared. You must decide which entry point to use, which offers your team different effects, and how to divide the team amongst them. Once you breach, each squadmate gets one action as they burst through. You can use this to try and eliminate as many enemies as possible, or maybe take out the biggest threat before it can react. Several of the unique abilities of the squad can utilised in the moment too, supplying buffs or debuffs. These moments are fantastic snapshots of strategy as you have to build a breach team that can handle anything that might be on the other side of the door/wall/window you’re about to come flying through, and the order they’re going to do it. Each breach moment can also completely change the rest of the encounter, weakening or removing some enemies, or accidentally falling into a trap.

Because Chimera Squad is turn-based in its most fundamental sense. Unlike the other games in the series where you spent your turn moving and using your entire before the enemies did the same, Chimera Squad has a proper initiative order. If you’ve ever played Dungeons and Dragons or Divinity: Original Sin, for instance, you’ll be acquainted with the principle, but it still feels incredibly fresh in XCOM. 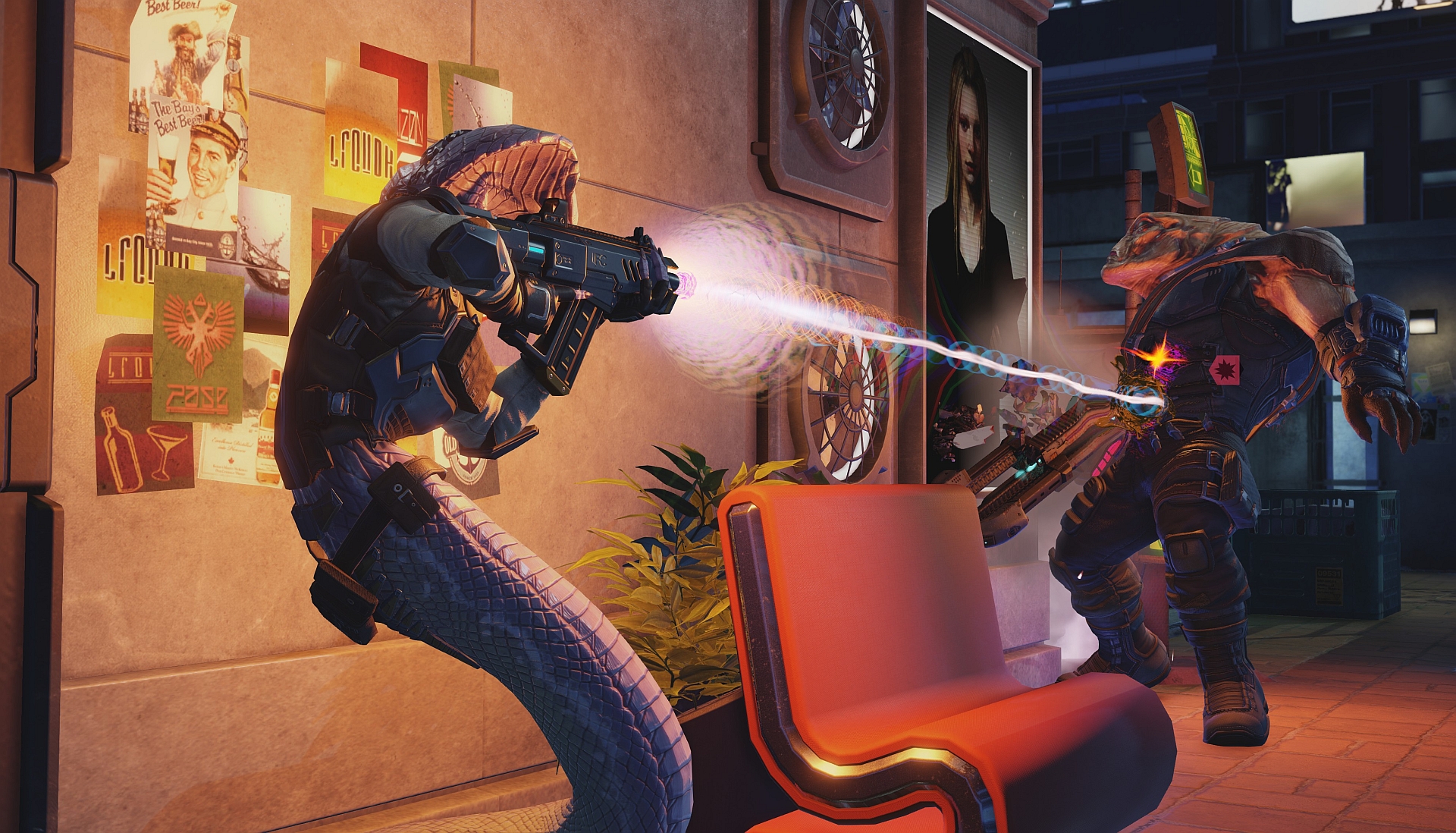 It might appear to be almost the same on the surface, but it completely changes the way you’ll have to deal with each encounter. Your most powerful unit might debate spending their turn finishing off a wounded grunt because it goes next and might be more dangerous than the turret that doesn’t get to fire until the end of the round. Meanwhile, your medic might have to make a clutch shot against the boss that’s about to slice through your entire team because she’s the only one who can react in time.

And on top of that, the class system has been opened up. While you’ll still feel familiar with each of your team and how they play if you’re an XCOM aficionado, you won’t be building nearly identical squads of rangers and snipers. Instead, each character is completely unique, with their peculiar abilities and utility on the field. It's up to you how to use these roles, but the new abilities are really interesting to experiment with and add a lot to the combat each time you breach. Some of the breach abilities can be used to save you from a nasty mistake, such as Cherub's Phalanx that lets him soak up retaliatory damage coming your way. Others can be used to help focus on specific targets like Verge's telekinesis that removes an enemy's cover bonus during the breach. But with overlapping abilities and the order of play dictated by you, these new abilities have to be carefully thought about before rushing through the door.

The biggest issue of Chimera Squad is the same one that has existed in the series since its reboot. XCOM is a famously challenging franchise, but one of its most difficult flaws is not knowing when you’ve lost. In the early game you just have to be incredibly smart, knowing how best to build your squad before you’ve even had the chance to play them, and failure to do that might mean losing somewhere down the line, many hours later in the playthrough. It can be incredibly frustrating to have to restart again on Ironman mode or find a save from hours earlier because you didn’t realise you were marching down a dead end for so long, and the game does little to communicate that. It's also a shame that Chimera Squad has changed so much of the formula without finding a meaningful solution to this particular issue. But if you’ve played an XCOM game before and enjoyed it, this isn’t likely to put you off. 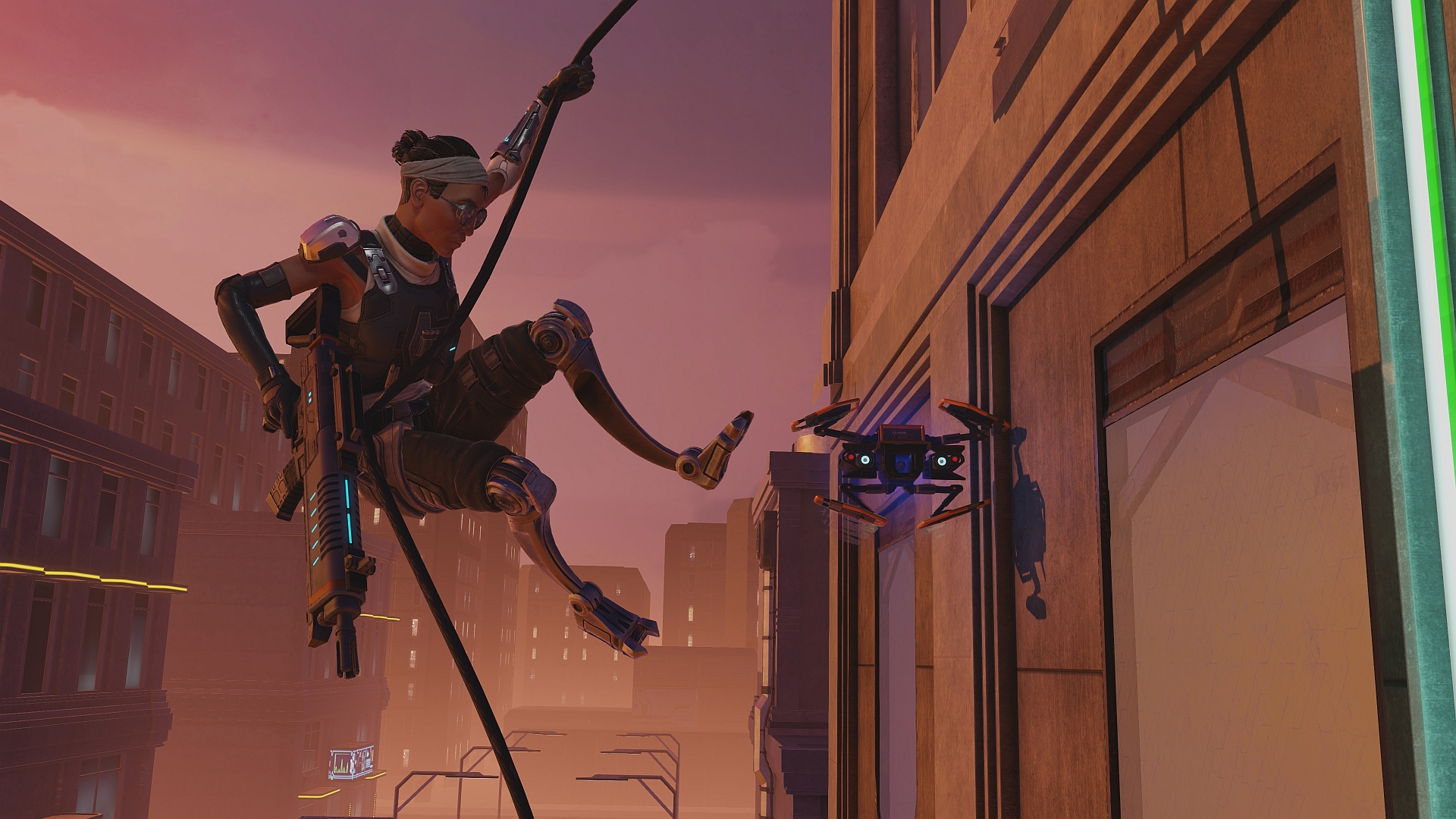 Other than that, Chimera Squad’s biggest frustration is missing crucial, nearly impossible to miss shots, but that rollercoaster ride of tactical planning and desperate adaptation when it all goes wrong is XCOM’s blessing and its curse. And for those not playing on Ironman mode, the option to reset the current room, rather than the whole mission, means you can try again instantly if it all goes completely wrong.

The new features that Chimera Squad experiments with fit perfectly with the franchise, and showcase a smaller, more focused battle system that loses none of the tension of XCOM's trademark strategic planning. New fans can pick up Chimera Squad and get all the skills they need to go and play its predecessor, while veterans can learn to overcome the brand new challenges.

Chimera Squad experiments with smaller encounters, more unique characters, and a change in the combat order with remarkable success. Although still weighed down by the traditional issues of the series, Chimera Squad excels in what it set out to achieve and is an incredibly satisfying tactical game.