Gaming headsets are quite an interesting beast often coming in wild colors, and feeling quite cheaply made. Viper has attempted to change things up a bit with the Viper V380 7.1 Virtual Surround Sound RGB Gaming Headset. Constructed of solid materials with a generous size for the ear cans the V380 doesn't leave that gamer feature set out by making sure they still include good old RGB but does the total package deliver at a palpable $89.99 MSRP?

The Viper V380 comes packaged very well in soft foam so it stays very safe in transit to you. The packaging is rather sparse with only the headset and a quick start guide in the box which is good for conservation efforts. Getting the headset out of the box is where the quality of the kit starts to show. Whereas most in this price bracket are really plasticky the V380 is not. While the construction on the outside shell of the cans is plastic the headband and can connection points are metal. The top of the headset is wrapped in leather with the Viper logo embossed.

Razer Viper Strikes At The Speed Of Light

The cans give just enough swivel to allow them to fit a variety of head shapes, including mine the best they can. The cans are fitted with the same leather as the headband and do get warm to wear after some time, this choice was clearly made to help aid in noise isolation in conjunction with the closed-back design of the headset.

The left can is where the magic happens with the non-detachable USB cable, mic port, and controls located here. The inability to replace the USB cable with a different one is a bad move as the lifespan is now tied to the care that is taken with a simple cable. The controls consist of a volume wheel conveniently located at the rear of the ear can, and the bottom has the LED controls and a mic mute button. the front of the left ear can house the microphone connection point. The detachable microphone is nice and compact and if you chose to use a desk mic then you can remove it and it has a nice rubber cover to hide the hose.

The Viper V380 is a surprisingly solid headset that feels and often sounds more premium than what you typically get within the gaming branded peripherals. The headset is quite comfortable to wear for a while, but after about an hour you're likely going to find it becoming a bit warmer to wear than you'd like due to the leather cups. The only complaints I have regarding the sound quality is the same I have with all gaming headsets, they're just too bass-heavy. Thankfully you have access to an equalizer if you choose to install the option software, which I heavily recommend.

The microphone delivers a much more solid experience than what was expected, especially when you enable the Xear Voice Clarity in the software that attempts to assist in actively eliminating ambient noise.  But while we're on the subject of the software and the mic, you also get access to some fun voice changers that work very well and can add a bit of fun to your gaming experience.

The VIPER software is completely optional since you've got controls on the headset itself for controlling the microphone and volumes, and for that, I give them credit. But, if you install the software you'll now have access to all of the additional niceties that we've mentioned so far including the Virtual 7.1 Surround Sound options. But is it good? Kind of, it definitely brings smaller nuanced audio cues into normal ranges better so you hear the little things, but I was never able to discern the direction of a sound unless it was in front of me. So take the Virtual 7.1 Surround as an added bonus and not a decision-maker. 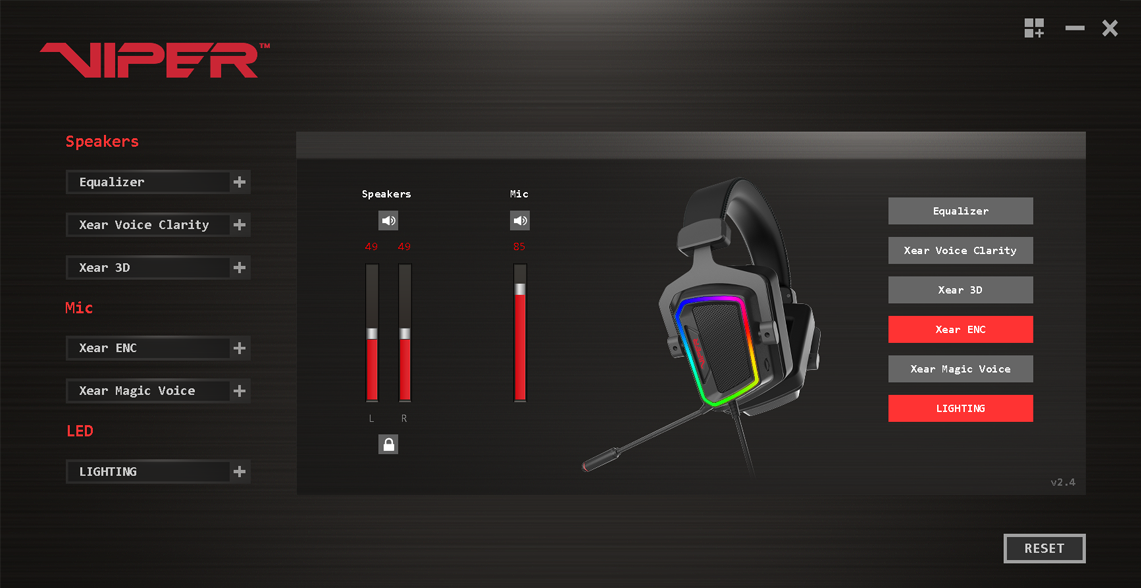 So is the Viper V380 worth the asking price? I believe so. It does still suffer from the usual overburdening bass that plagues almost every gaming headset but with the included equalizer you can balance that out a bit. The 7.1 Virtual Surround is somewhat bland. The USB cable is non-removable which means you're stuck with the one. And, after some time it can become a bit warm to wear.

Okay, now that I got the negative stuff out of the way let's talk about what the Viper V380 got right. The overall sound quality is good, the highs come through well and vocals are easy to understand and you have a full equalizer to work within the lightweight software. The software also gives you access to the XEAR Voice Clarity feature that will do a number of clearing out ambient noises around you so your teammates hear only you. Don't want to use the mic? Cool beans, rip it out, and cover the hole and now you've got a clean pair of headphones with RGB. Don't like the RGB or the software? Don't use either, never install the software and turn the RGB off via the button on the headset.

The Viper V380 may stumble on some things but overall it's a solid offering at it's $89.99 asking price. It does face some stiff competition and while I would urge you to check out all your options. I have no problem recommending the Viper V380 for those who like the way it looks as they'll also find the rest of what it offers just as satisfying once they get their hands on it.

I have no problem recommending the Viper V380 for those who like the way it looks as they'll also find the rest of what it offers just as satisfying once they get their hands on it.