Unity of Command was and remains one of the biggest surprises of my gaming life. It was a simple but ultimately engrossing and challenging strategy game that did so much with so little. You had to worry about the supply lines of your units, the composition of your units and ultimately if attacking at that moment in time was the right decision or not. Unity of Command II adds a few things here and there, it seems originally a little over-complicated but soon shows just how fantastic it is. 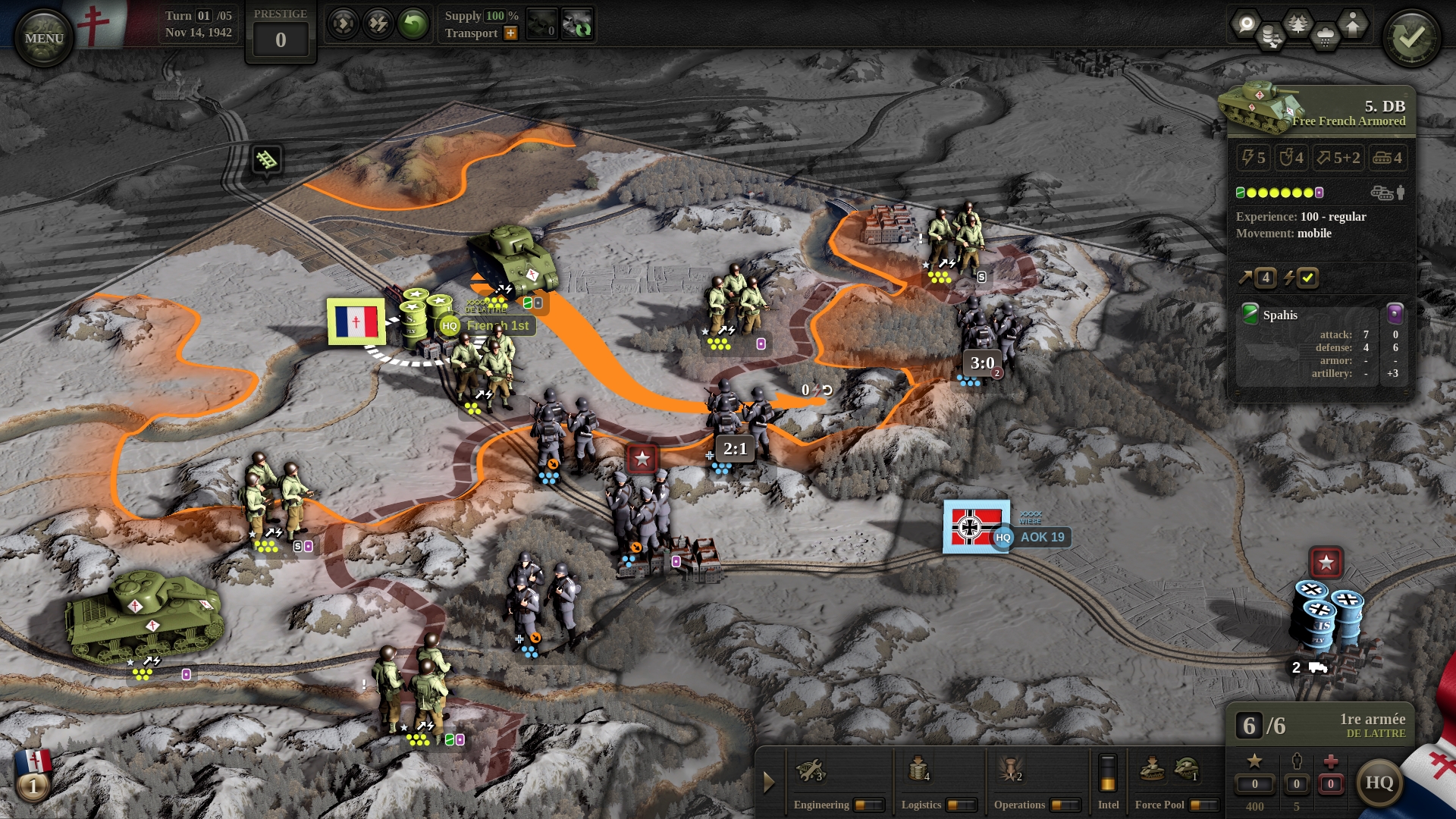 I have one problem with Unity of Command II. It can be quite obfuscating. Sometimes it's something as simple as core objectives - for example, to get a gold star in a campaign mission, you're expected to capture certain locations within a time limit. It could say, for example, capture a location turn 11. What it doesn't say is that you are expected to have captured it before turn 11, not by the end of turn 11. It's small, but it matters, particularly when you're following the objectives and trying to get as much as you can.

Other areas that are a little hidden, in dire need of a FAQ, are what exactly the special steps do. I figured out through much holding of the cursor on different icons that Engineers are useful for attacking entrenched enemies. What the rest do, well I've recently bought an Ouija board to consult with Patton, Montgomery and Rommel to help me figure out exactly what the hell I'm doing. Maybe there's something hidden away somewhere that tells me exactly what I'm looking for, but I'll be damned if I'm going searching around for it - it should be there, easy to find.

Still, the basics are at least easy. Unit supply is an absolute pain in the arse, particularly for me who goes for blitzkrieg tactics more than anything else in this game. All too often I'll find myself over-extended, a large front with far too few supplies to keep it going. On occasions, my lines will be cut and I've got a pocket of units, often being supplied by supply drops generated by the trusty card I had pocketed away just in case. I learned very quickly to save at least one supply card for a just-in-case scenario. 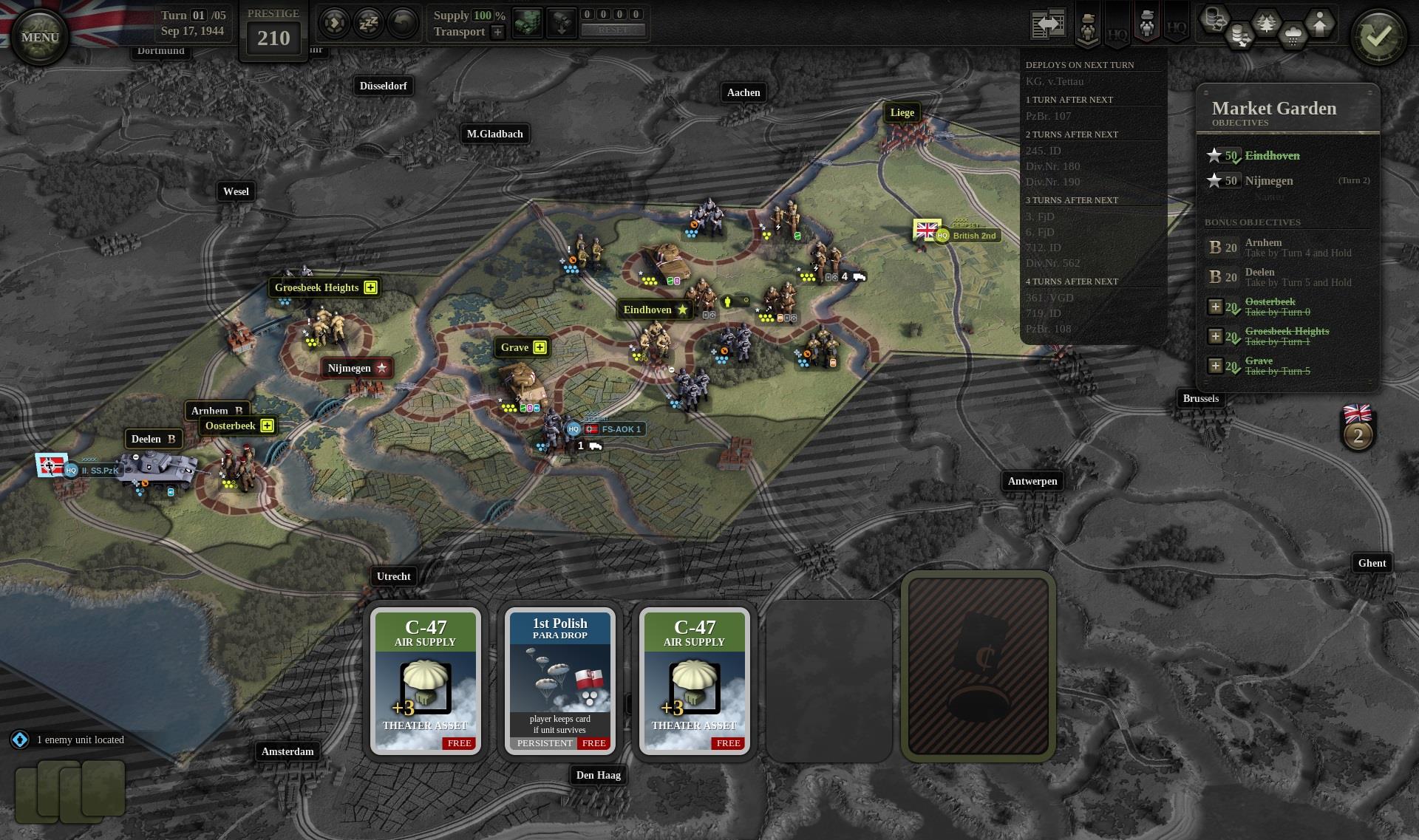 "What are these cards?" I hear you ask. Well, Uncle Adolf, these cards are both single and multi-use things that are purchased using prestige at the start of a scenario. They can also be earned by completing certain side objectives too. The cards range from giving you an extra transport truck to increasing the number of bombing runs allotted to you each turn. Other cards can give you a paratrooper unit or a naval landing brigade. It's an extra layer of strategy that works perfectly with the core game. The only slight issue I have is that with certain troop units, the card remains in your deck if the unit doesn't die and supposedly features in follow-up scenarios. I've looked for them, honest, but no joy.

This isn't to say that there isn't any continuity. Each campaign consists of multiple scenarios and your unit losses, as well as the objectives you take and speed you do them has a direct impact on the next scenario. Get a gold star (complete all core objectives in the times given) in one and you'll start in a much more favourable position in the next. It rewards fast play, though lose too many units by overextending yourself and you may find yourself in a tough position later.

Granted, units will reorganise if the routed ones aren't killed or captured and make it back to your HQ's. The start of a scenario will inform you which battalions have been reformed and brought back into the fight. You also get reinforcements in other scenarios. There's little doubt you'll need them all as well because if there's one thing that can be said about Unity of Command II, it's far from easy. It's particularly difficult to break down an entrenched defender, particularly as I'm certain the RNG gods (is it RNG?) hate me when I'm dropping five bombs on an enemies head and not even a single step is suppressed, nevermind killed. 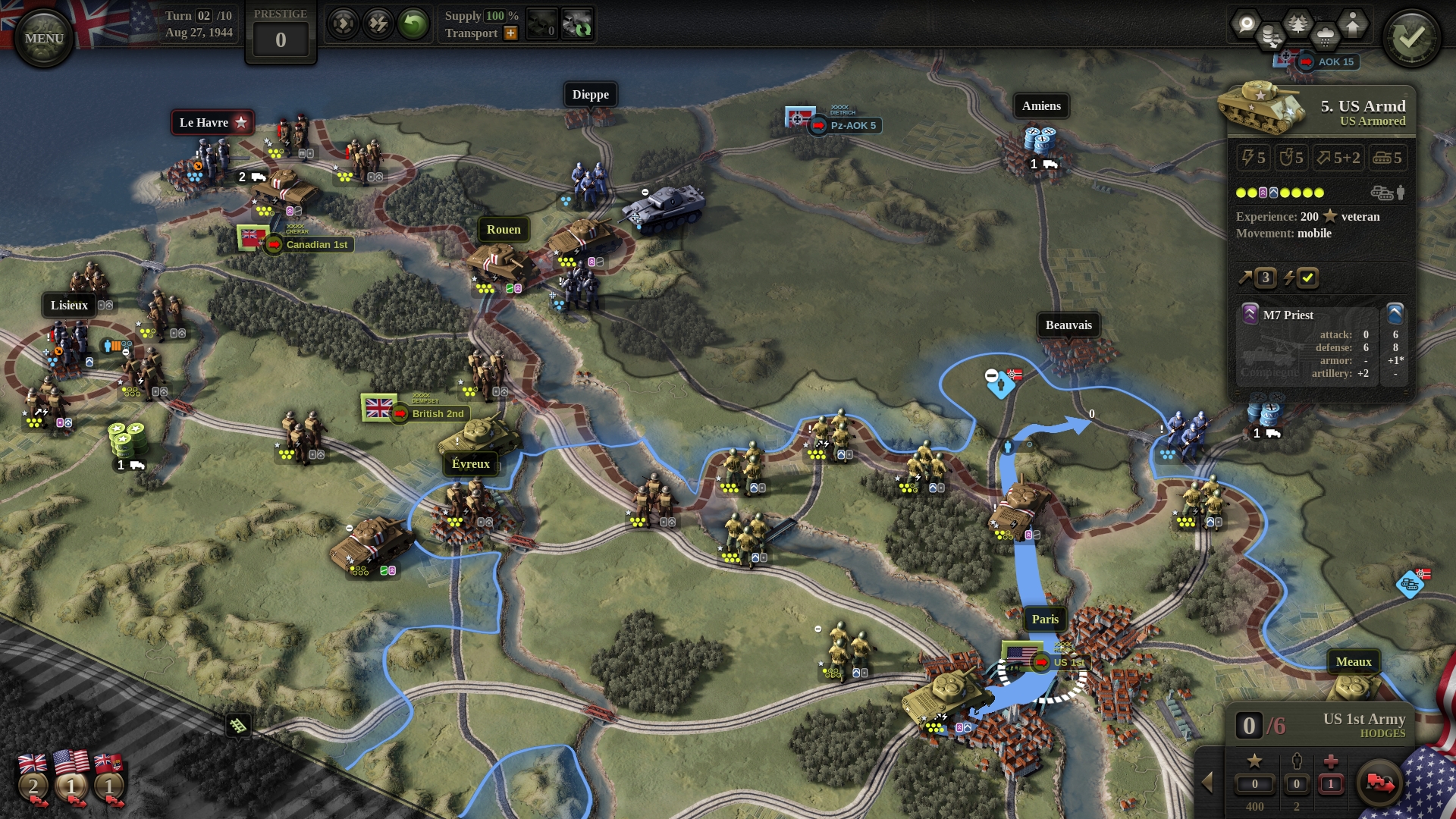 It could be RNG anyway. That or there's some complex algorithm working behind the scenes that I'm not privy to. Realistically, an entrenched or further fortified enemy would be more resistant to bombing runs, but for it to have no effect is just painful. To me anyway, because I'm worrying I won't get past the enemy. That's where one of the new features comes in, headquarters. Your fighting is still done by the units as in the first title, but each unit is now attached to a headquarters.

Each headquarters has a limited number of command points, which lets the units under that HQ's command that allows them to, provided the unit is in range, use a special attack for a certain number of points. This is how what was already a challenging war game brings in more realism and enables you to work through a completely different type of war found in the western front. Italy's mountain ranges, the hedgerows of France, naval landings and increased use of paratroopers requires a different level of thinking to the open plains of the Soviet Union.

The enemy can entrench, you're going to need all of your guile, your tactical manoeuvrability and the use of these special attacks (which use and suppress special steps) to break down an enemies defences without costing you too much. You'll also need to be keenly aware of the terrain and natural land barriers like rivers. Bridges can be destroyed by the enemy (using command points) and you can also use your headquarters to build pontoon bridges or repair demolished ones, dramatically speeding up your movements.

Fortunately, in between campaigns you can spend other stored prestige points to level up the armies under your command. You can increase the number of points at your headquarters disposal, increase the number of certain special attacks or even the amount of bridge building/destroying that can be performed in a single turn. Each kill made by your units also adds experience to that unit and its headquarters, levelling them up further. It all makes for yet another strategic level behind that of the core game, especially as you have to balance the prestige spent here with that spent on the cards. 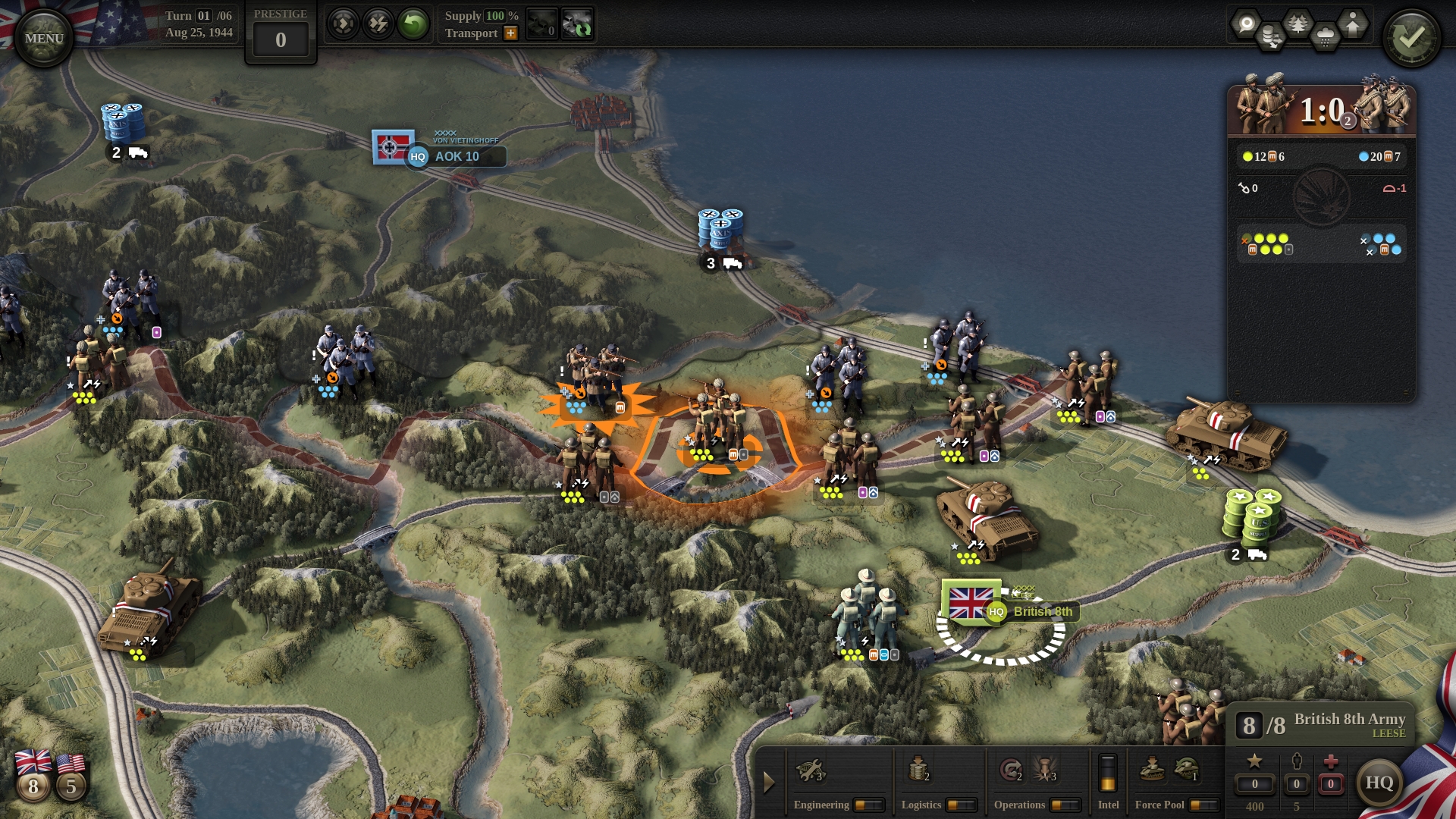 Everything in Unity of Command II feels more involving than the first. There's certainly a learning curve, one that even thirty hours in, I'm still encountering. The AI is, for the most part, incredibly smart. I've had a few occasions where it makes moves I don't understand but overall even on the normal difficulty it poses a big challenge. This is an AI that adapts incredibly well to the massive number of scenarios in the campaign each with varying terrain, natural land barriers and more. It's a feat rarely found in games to have an AI that seems this adaptive and intelligent.

Furthermore, there's also a scenario editor and creator, letting you make your own challenges and again, this is managed without a single hiccup. Nothing in Unity of Command II is impossible, it's all about finding the best use of what you have and outsmarting the enemy. It doesn't stop some time limits in the campaign feeling impossible - though that may simply be because of my poor starting position due to my performance in the previous scenario.

It would be easy to think that Unity of Command II suffers due to the increased scope and features within the game, bogging down what made the original free-flowing and still tactically brilliant. However, the western front was a case of getting bogged down but finding the best way to get around an entrenched foe without losing every man under your command. The new features like the special attacks and headquarters combine with some utterly outstanding campaigns to make Unity of Command II one of the most engaging strategy games ever made.

Unity of Command II makes for one of the most tactically engaging and challenging strategy games ever, enhancing an already excellent original with new features such as special attacks, a headquarters system which adds a levelling up system - working with the myriad of side objectives - and a very different type of war found on the western front to the east. It has quite the learning curve and may seem as impenetrable as the Maginot Line, but with a little time you'll come to love exactly how it works.

Serious Sam 4 Launches This Summer on PC and Stadia, but Not on Xbox One or PS4