The Outer Worlds: Murder on Eridanos

Murder on Eridanos, the second DLC planned as part of The Outer Worlds' Season Pass, is out today. Following the previous release of Peril on Gorgon, there has been no indication there will be any more downloadable content for The Outer Worlds, making this possibly the last DLC before the developer turns to other projects (likely including a sequel, given that the game turned out to be more successful than even publisher Private Division had anticipated; rumors about The Outer Worlds 2 being in pre-production are already swirling, in fact).

Murder on Eridanos takes off from one of the most classically exciting narrative premises: a murder investigation. Your player character, the Captain of the Unreliable, is tasked by Rizzo's CEO to solve the assassination of none other than Halcyon Helen, the beloved star of aetherwave serials renowned throughout the system. Helen was also the marketing face of Rizzo and, with a new product launch coming up shortly, the pressure of clearing what really happened to her couldn't be higher.

As befitting the type of story that Obsidian tells in this DLC, there are a fair number of plot twists, some of which I certainly didn't anticipate. The writing remains arguably the game's strongest asset, as mentioned in the reviews of the base game and the Peril of Gorgon DLC. Even in this second expansion, there are some striking characters that will be stuck in your mind for a while.

That said, it doesn't feel like Obsidian made the most out of Murder on Eridanos. Right away, two obvious suspects are pointed out as likely perpetrators, though you'll find more later. As the appointed Inspector, you get a 'Discrepancy Amplifier' tool, provided by the local scientist, to aid in your investigation. This is essentially a scanner packed with an AI capable of analyzing nearby clues.

You can review those in your Penthouse Suite, and, at a certain point, you're even at liberty of making proper accusations. However, there appears to be no way of finding damning evidence on the actual murderer until the story deliberately points you that way. This inevitably cheapens a bit the whole investigation aspect of this DLC, in retrospect.

Additionally, it is also puzzling that the player character isn't always able to properly report certain sensitive findings. You would think that parasites sticking out of people's necks before growing to full human size and infecting the host to act aggressively should be a noteworthy discovery.

Combat, on the other hand, is very much the same affair of The Outer Worlds. Adequate, even enjoyable, for all the very few seconds that it lasts. That's right, even on the Hard difficulty, there is no challenge at all to the combat; this, in turns, renders moves like blocks or dodges almost superfluous. The climactic fight of Murder on Eridanos does include a proper boss to slay, addressing a common complaint with previous content. However, even this boss fight was over in a little over thirty seconds, hardly feeling as epic as it should have.

For some inexplicable reason, the Supernova level of difficulty, the highest in The Outer Worlds, remains locked behind the decision to accept your companions' permadeath in place of their temporary incapacitation. Most other roleplaying games (including, for example, the recent Wasteland 3 from fellow Xbox Game Studios partner inXile) make permadeath an optional modifier, which is undoubtedly the best choice as it gives players the ability to customize their adventure. There used to be a workaround mod on PC, but the part that enabled users to disable permadeath for companions on Supernova difficulty hasn't worked since the release of Peril on Gorgon, sadly.

Loot is similarly a bit disappointing. The boxes and safes scattered throughout the environments yielded countless amounts of ammunition, weapon parts, armor parts, and the like, but none of that was really useful as my characters already had a virtually infinite supply of those resources. Also, while I leveled up to 36 (the new cap), I didn't find any worthy armor or weapon upgrade for my character or the companions.

My playthrough of Murder on Eridanos lasted exactly 13 hours, during which I completed every bit of content that was available, including side quests and tasks. Considering that the price of the entire expansion pass is down to €20 on Steam until March 24th, that's definitely more than enough bang for your buck.

Visually, Eridanos is quite a unique sight. The planet is classified as a Jovian gas giant, the second in the Halcyon system after Olympus, and its atmosphere is rich with hydrogen, helium, and other noble gases that corporations extract. The habitable part where Murder on Eridanos takes place is entirely artificial, a complex of floating islands linked together by long bridges, each one hosting a separate area. There's the Purpleberry Orchards that provide Rizzo's products, the Distillery Station, the Wilderness reserve, the Space Port, and the Grand Colonial Hotel in the midst of it all.

Technically, though, this is still fairly unremarkable for an Unreal Engine 4 game. Even when pushed to its very max on PC, its graphics (facial animations included) do not impress, and the performance isn't ideal either. Even on a high-end configuration featuring an i9 9900K processor and RTX 3090 graphics card, stuttering is at times noticeable when crossing between areas, even if it really feels like there's nothing that should stress the game to such an extent.

On the other hand, the voice acting is very well done, and sound as a whole is one of the highlights of Murder on Eridanos. 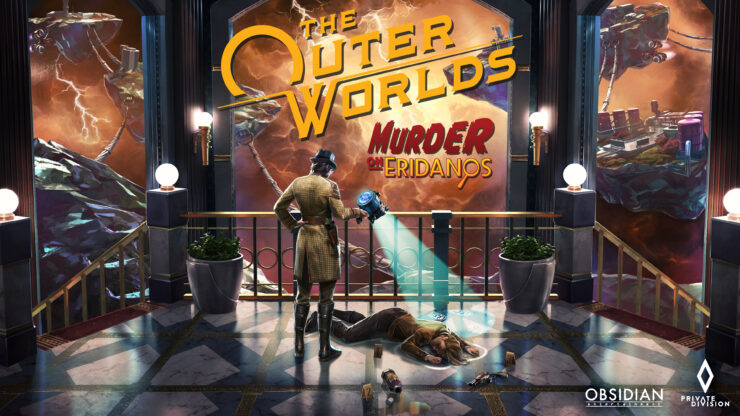 Murder on Eridanos provides an intriguing story to follow thanks to its murder investigation premise, even though the DLC otherwise maintains all of the pros and cons of The Outer Worlds and its previous DLC, Peril on Gorgon.