Obsidian, one of the most famous Western RPG developers in the games industry, has historically struggled a bit to keep afloat. Before getting acquired by Microsoft, they've had financial troubles at various stages and eventually had to resort to funding their cRPG IP Pillars of Eternity through Kickstarter (for the first game) and Fig (for the sequel).

With The Outer Worlds, though, the folks at Obsidian are now back to making a first-person action RPG with the help of a more traditional publisher, Take-Two's Private Division.

Directed by Fallout creators Tim Cain and Leonard Boyarsky, The Outer Worlds feels pretty much exactly the game you'd expect from Obsidian if you've played a few of their titles before. A space-faring adventure featuring a silent protagonist, The Outer Worlds is set in an alternate version of our reality where mega corporations can acquire the full rights and control of certain star systems to colonize them as they please. According to the backstory, ten major corporations joined forces to form the Board and acquire the rights to the Halcyon Cluster, a star system on the fringe of the galaxy where the game takes place.

The colonization attempt encountered a major issue when one of the two colony ships sent from Earth, the Hope, failed to arrive on schedule and only appeared decades later than expected due to faulty faster-than-light engines. At that point, the Board was unable to revive the hibernated colonists and decided to cover up the ship's arrival from public knowledge.

Luckily, a rather bizarre scientist named Phineas Welles manages to unfreeze your character, which is when the game begins. Welles is on the run from the Board and recruits you to fight the corporations and revive the Hope's other colonists, who haven't been corrupted yet by the Board and could help rebuild. Indeed, as you might have guessed, The Outer Worlds features a space colony that's under the suffocating thumb of unbelievably cruel and inhumane corporate policies. Just as an example, the first town of Edgewater is owned and operated by Spacer's Choice, with locals forced to work at the local cannery. When you first arrive you learn of a plague that affects the population, except it is curable and the medicines are only handed out to those still healthy enough to keep working; the others are quarantined and left to die, all in the name of productivity.

However, as in any truly great RPG, The Outer Worlds allows you to betray Welles and side with the Board should you wish to do so. Indeed, all across the game, you'll be able to deal with matters as you see fit, violently or non-violently. You can persuade, lie, intimidate, hack, sneak, and of course, fight your way through to get to the quest objectives. Just beware that often choices are far from black and white which, again, is a mark of greatness in the RPG genre.

The dialogue system may be traditional (it's not seamlessly integrated into the gameplay and there are no timers requiring you to provide an answer right away), but the dialogues themselves and the writing as a whole are truly excellent and arguably the best part of the game. The companions you're able to recruit as partners of your endeavors are fantastically characterized and their quests are easily among the best in The Outer Worlds; don't miss them. You can bring two companions with you at a time (there are six in total) and they'll react in a very believable way to what's going on, interjecting during dialogues with other NPCs if they have any additional context to provide or comments to make on the topics at hand. Overall, The Outer Worlds is filled with remarkably complex characters to meet.

So far, I've outlined the best parts of The Outer Worlds. The actual action is, sadly, a bit less exciting in comparison. Immediately when landing on Terra 2's Emerald Vale region, it's difficult not to be disappointed at the size of the explorable environment, which you can easily cover in a couple of minutes. The same is more or less true for any playable zone, with the exception of Monarch, which is thankfully much bigger and is, therefore, the only zone that really provides the feeling of exploring a proper alien world. It's not that The Outer Worlds absolutely had to be open world, in fact, the current structure would have been fine considering the implied necessity to jump between planets. However, if all of the major locations were similarly sized to Monarch, the issue would be much less severe.

Given the power of current generation hardware and the tools at disposal of game studios (such as the Unreal Engine 4 used for this one), games nowadays have managed to massively increase the immersive factor by providing reasonably sized locations that can be seamlessly toured by players.

Seamlessness is another sore spot here, as even with the relatively small environments, you'll often encounter loading screens while transitioning to interiors. The same occurs in Fallout games, of course, but at least those have a massive game world that's ripe to exploration.

While there's a day and night cycle in The Outer Worlds, there is no dynamic weather and most importantly, the AI routines are really quite simple. That is to say, you'll find them almost always at the same spots (unless some quest moved them away for a specific reason), again chipping away at the player's immersion.

This ties into the flaws of the stealth system, because it means you'll have absolutely no trouble stealing everything possible from right under the nose of NPCs who're sitting in the adjacent room and will never move from there. On the other hand, and for the very same reason, it becomes almost impossible to steal things from the rooms that they do populate since they don't have a routine set to go some other places at some point in the day.

Additionally, there is no way to re-enter the state of stealth after vanishing from sight, a popular feature that has greatly improved games sporting some form of stealth. That said, this is a minor flaw in the grand scheme of things for a game like The Outer Worlds.

Combat fares better, though it doesn't exactly shine either. Hitting foes feels pretty good, which is important, but again the AI fails to provide an adequate challenge. Playing at Hard difficulty, most encounters last but a few seconds if you only use a bit of tactics through the Tactical Time Dilation 'bullet time', explained lore-wise as a side effect of the protagonist's prolonged hibernation.

There is a more challenging mode called Supernova, but it comes with other twists such as companions now potentially suffering from permadeath, which isn't something most players may want to enable in their playthroughs. Beyond the mere issue of difficulty, though, there are hardly any epic, memorable fights, which is a bit of a problem for an action RPG.

When it comes to melee, the narrow field of view (unchangeable on consoles, at least for the time being) doesn't help, particularly when trying to do a perfect block. If you do want to specialize in melee combat, at any rate, enhancing the dodge skill is a good option as it'll increase the actual distance of your dodge moves, including a forward leap that's very helpful to close the gap with your opponents.

One great addition to character progression is the Flaw system. In The Outer Worlds, suffering from repeated instances of a negative event will prompt the system to offer you a flaw in exchange for a perk point. Some examples include fear of heights after you've taken enough damage while abruptly meeting the ground below, or your body taking increased corrosive damage after having suffered enough pain from the creatures dealing that kind of damage.

It's a rather ingenious system that organically increases a player's ability to customize his/her own character and it would be definitely nice to see something similar in other role-playing games. Obsidian certainly has the opportunity to expand upon it in future titles, too.

We received an Xbox One code and thus tested The Outer Worlds on an Xbox One X console. Even on the most powerful console presently available on the market, Obsidian's latest is far from a looker. This is especially visible when traversing a planet's exterior environments, where subpar lighting and texture work abound. There's no HDR support for some reason and that could have helped breathe a bit more life in the game's zones. The performance is not perfect either, particularly when playing in outdoor areas, where stuttering is not uncommon at all, while interiors look better and run smoother. Loading screens, as mentioned earlier, are quite common and they aren't quick to get through on an Xbox One X default drive.

On the other hand, the audio of The Outer Worlds is unequivocally praiseworthy both in terms of music and voice acting.

It's important to remember The Outer Worlds isn't quite a triple-A game in many regards. Private Division was established to function as Take-Two's publishing label for middle-sized independent developers, thus walking the line between indie and AAA. Moreover, as Senior Designer Brian Heins told us in a recent interview, the project began development roughly three years ago and back then it was just Tim Cain and Leonard Boyarsky for several months; full-scale production only ramped up about two years ago.

That's a short time to make an expansive RPG (the game will take you over forty hours to complete including the side quests). However, it'll be exciting to see Obsidian's next projects now that they have Microsoft's resources at their disposal, a first for a studio used to make do with less than sizable budgets.

Reviewed on Xbox One X (code provided by the publisher). On PC, the game will be available through Epic Games Store and Microsoft Store. 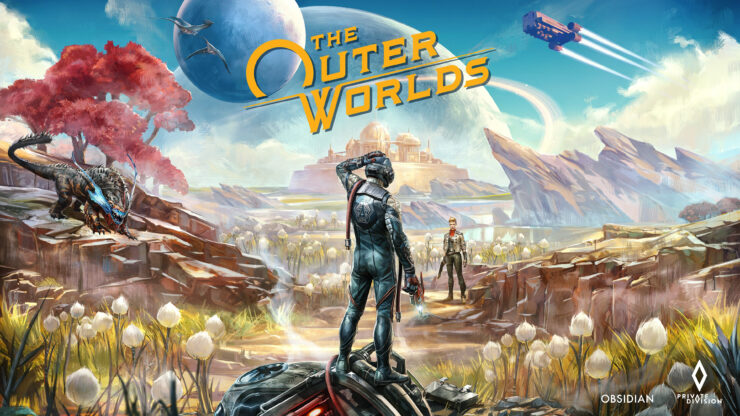