There are a lot of games that cast players as journalists, but few that portray the job in any sort of realistic way. As soon as the you-know-what hits the fan, video game reporters usually toss aside their notebooks and recorders and become typical daring action heroes. Well, The Occupation takes the job just a bit more seriously – you never pick up a gun in this new first-person adventure game, and your most challenging opponents are a looming deadline and uncooperative interview subjects.

The Occupation certainly takes a unique approach, but is playing as a somewhat more true-to-life reporter actually fun? Is the story you’re working to uncover in the game frontpage worthy or much ado nothing? Grab your press passes, it’s time to investigate…

The Occupation takes place in 1987 in an unnamed city in North West England (likely Manchester, which is where developer White Paper Games is located). The UK Government is pushing a controversial measure called The Union Act, which has sparked widespread protests and rioting. Things go from bad to worse when The Bowman Carson Group, a shadowy organization tied to the Union Act in mysterious ways, is struck by a terrorist bombing that kills 23 people. A man named Alex Dubois is nabbed for the crime, but there are murmurs it may be a frame job. You play as prominent journalist Harvey Miller, who’s been granted access to the Bowman Carson facilities for an afternoon. Officially, you’re just there to ask a few softball questions, but, secretly, you’re looking to uncover the truth about the bombing.

If this all sounds rather juicy, maybe even a touch controversial, well, don’t get too excited. The Occupation never gets particularly edgy with its politics. The Union Act is clearly meant to invite parallels to the post-9/11 U.S. Patriot Act and the current Brexit debacle, but its details are kept intentionally vague. It’s mentioned in passing that the Union Act is anti-immigrant, but that’s about all we learn. The act is generally portrayed as a bad thing, but only because it’s quickly outed as a front for The Bowman Carson Group’s private data collection schemes. The characters you encounter rarely mention politics, and when they do it’s usually in the most facile “Those damn fat cats in Parliament!” sort of way. The Occupation tries to have it both ways – it wants to be a cool, provocative political thriller, while studiously avoiding anything that might upset players.

But hey, beyond the political stuff, does The Occupation at least spin a good basic yarn? Sadly, no, as the game’s story unfolds in a very fragmented way. While you primarily play as Harvey Miller, there are also interludes where you play as Scarlet Carson (the wife of Bowman Carson co-founder Michael Carson), who might have something to do with the bombing. I was halfway through The Occupation before I got even a basic grasp on what was happening in the world, and still had a good many questions when I finished the game. A lot of important events happen off-screen. Key people are talked about but never seen. It feels like The Occupation is trying to tell a story more ambitious than its budget can handle.

I’m being pretty hard on The Occupation’s overall plot, but I’ll admit, I did enjoy much of the game’s moment-to-moment gameplay and smaller story beats. This is largely due to the game’s rather unique structure. You have a series of interviews scheduled throughout the afternoon, but in between them you’re free to wander various locations in the Bowman Carson facility. The game proceeds in real time, which means you usually only have an hour to dig up dirt before your next appointment. One of your inside sources will occasionally call into a payphone with some info, but it’s mostly on you track down leads by eavesdropping on conversations, sneaking into offices, hacking computers, and rifling through abandoned filing cabinets, all while sidestepping security.

The Occupation’s office environments are intricate and generally well-designed, and the game’s characters all have detailed routines they follow. It’s all presented fairly well – the game won’t blow you away on a technical level, but its stylized visuals set the right tone. That vibe is further bolstered by quality voice acting and a fun 80s new wave and Britpop soundtrack. Overall, the complexity of the world, combined with the ticking clock, can be quite compelling. While The Occupation has been compared to immersive sims like Deus Ex or BioShock, it most reminded me of the LucasArts classic Maniac Mansion in the way you explore the setting without a lot of direct guidance, while keeping tabs on the game’s NPCs. But The Occupation isn’t an old-school adventure game – it’s much more relaxed about imposing objectives on you. The clues you collect determine how hard-hitting you can get in your interviews, but you can also just take a seat for an hour, fudge the interview, and continue on.

Unfortunately, the option between action and inaction is really the only meaningful choice The Occupation offers. For most of the game, you’re not really given the opportunity to ally with one person over another or express your opinion about the Union Act, immigration, or anything else. There are a small handful of choices presented near the end of the game, but they’re pretty straightforward, with the game clearly setting up certain choices as the “right” ones. Granted, action or inaction is what a lot of real-world moral dilemmas come down to, but it feels a bit one-note here.

The Occupation’s structure may be solid, if a bit shallow, but the game has some serious issues with its basic controls and mechanics. Movement is a touch slow and awkward, with your character getting caught on things on a regular basis. Your clues are recorded in a difficult-to-navigate dossier, and the things you pick up are kept in a briefcase, which, in a misplaced bit of realism, has to be placed on a flat, cleared surface to be opened. Quite often there’s no proper surface available, so you have to pop a squat and rifle through your briefcase on the floor. Not really a habit of your top investigative journalists. The game is also seriously glitchy – often interactive hotspots wouldn’t show up properly when I was pointed at them, key items would disappear, or I’d find myself stuck in doors or other objects. These issues frequently required a restart, which is a serious pain, as this game has no mid-chapter saves. The Occupation isn’t about precision action, so the control issues and glitches aren’t game-breaking, but they certainly are irritating.

Thus far, I’ve (hopefully) described The Occupation as an interesting, yet flawed experience, but that only really applies to the first two-thirds of the game. Sadly, the game really drops the ball in its final third. After your second interview, the game serves up a lengthy linear section with no characters to interact with, then follows that up with a bit that’s heavily focused on stealth. Earlier parts of the game feature some light stealth, but this final section is much more demanding, and the game’s clunky controls and lack of polish makes for a miserable experience. More than once the guard chasing me warped right through a wall into the room I was hiding in – Metal Gear Solid, this ain’t. The last hour or so of The Occupation really left a sour taste in my mouth.

The Occupation takes around five or six hours to complete, and there is an incentive to play through again as there are multiple endings and it’s almost impossible to dig up all the clues the first time around. Much like a real journalist, your determination to stick to it will depend on your tolerance for aggravation and desire to know the full truth.

This review was based on a PC copy of The Occupation provided by publisher Humble Bundle. You can purchase the game for PlayStation 4 or Xbox One via Amazon. 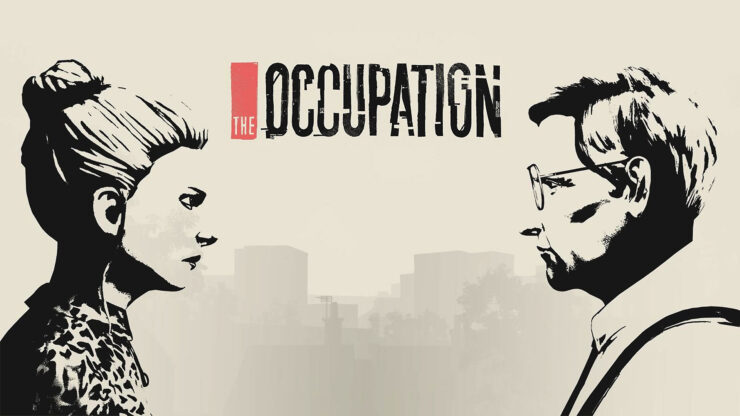 The Occupation structures itself in an interesting way, sets a unique tone, and toys with some potent topics, but lacks the depth or polish needed to live up to its potential. Like a disappointing newspaper article, you’re left with more questions than answers and wishing somebody would do the subject proper justice. The Occupation is, unfortunately, pretty vacant.